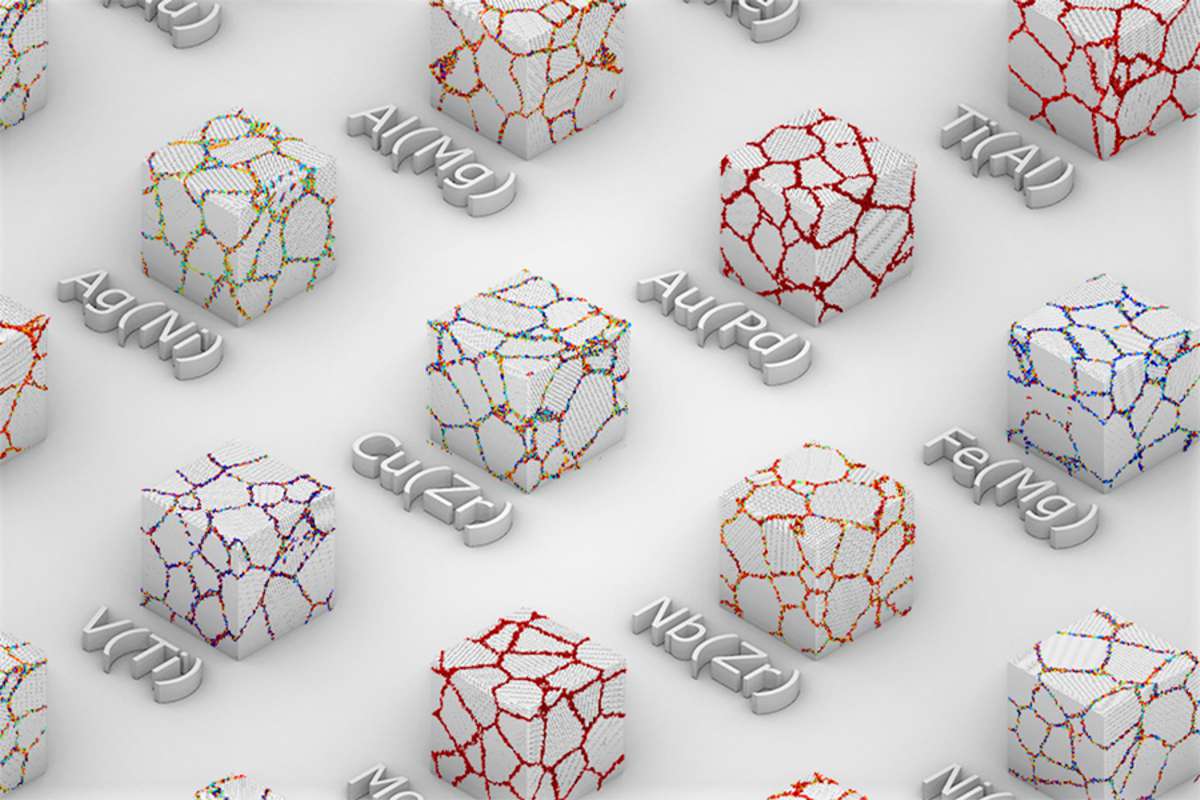 Advanced metal alloys are essential in key parts of modern life, from cars to satellites, from construction materials to electronics. But creating new alloys for specific uses, with optimized strength, hardness, corrosion resistance, conductivity, and so on, has been limited by researchers’ fuzzy understanding of what happens at the boundaries between the tiny crystalline grains that make up most metals.

When two metals are mixed together, the atoms of the secondary metal might collect along these grain boundaries, or they might spread out through the lattice of atoms within the grains. The material’s overall properties are determined largely by the behaviour of these atoms, but until now there has been no systematic way to predict what they will do.

Researchers at MIT have now found a way, using a combination of computer simulations and a machine-learning process, to produce the kinds of detailed predictions of these properties that could guide the development of new alloys for a wide variety of applications. The findings are described in the journal Nature Communications, in a paper by graduate student Malik Wagih, postdoc Peter Larsen, and professor of materials science and engineering Christopher Schuh.

Schuh explains that understanding the atomic-level behaviour of polycrystalline metals, which account for the vast majority of metals we use, is a daunting challenge. Whereas the atoms in a single crystal are arranged in an orderly pattern, so that the relationship between adjacent atoms is simple and predictable, that’s not the case with the multiple tiny crystals in most metal objects. “You have crystals smashed together at what we call grain boundaries. And in a conventional structural material, there are millions and millions of such boundaries,” he says.

These boundaries help to determine the material’s properties. “You can think of them as the glue holding the crystals together,” he says. “But they are disordered, the atoms are jumbled up. They don’t match either of the crystals they’re joining.” That means they offer billions of possible atomic arrangements, he says, compared to just a few in a crystal. Creating new alloys involves “trying to design those regions inside a metal, and it’s literally billions of times more complicated than designing in a crystal.”

Traditionally, he says, those designing new alloys simply skip over the problem, or just look at the average properties of the grain boundaries as though they were all the same, even though they know that’s not the case.

Instead, the team decided to approach the problem rigorously by examining the actual distribution of configurations and interactions for a large number of representative cases, and then using a machine-learning algorithm to extrapolate from these specific cases and provide predicted values for a whole range of possible alloy variations.

In some cases, the clustering of atoms along the grain boundaries is a desired property that can enhance a metal’s hardness and resistance to corrosion, but it can also sometimes lead to embrittlement. Depending on the intended use of an alloy, engineers will try to optimize the combination of properties. For this study, the team examined over 200 different combinations of a base metal and an alloying metal, based on combinations that had been described on a basic level in the literature. The researchers then systematically simulated some of these compounds to study their grain boundary configurations. These were used to generate predictions using machine learning, which were in turn validated with more focused simulations. The machine-learning predictions closely matched the detailed measurements.

As a result, the researchers were able to show that many alloy combinations that had been ruled out as unviable in fact turn out to be feasible, Wagih says. The new database compiled from this study, which has been made available in the public domain, could help anyone now working on designing new alloys, he says.

The team is forging ahead with the analysis. “In our ideal world, what we would do is take every metal in the periodic table, and then we would add every other element in the periodic table to it,” Schuh says. “So you take the periodic table and you cross it with itself, and you would check every possible combination.” For most of those combinations, basic data are not yet available, but as more and more simulations are done and data collected, this can be integrated into the new system, he says.

The work was supported by the U.S. Department of Energy, Office of Basic Energy Sciences.