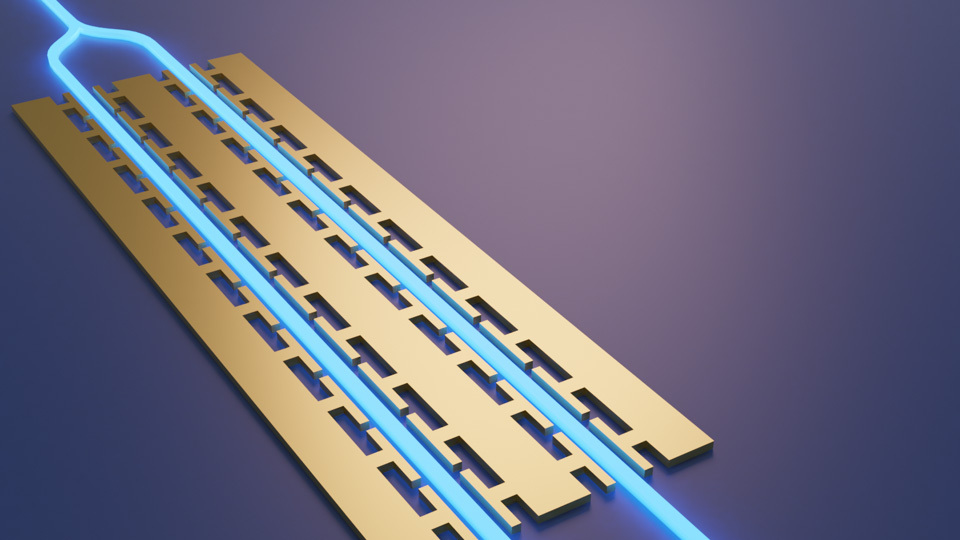 The broadband electro-optic PIC could lead to orders of magnitude energy consumption reduction for next generation optical networking.

Energy consumption in optical networking for ethernet, data centers and 5G is soaring as a result of the rapidly growing data traffic. This is because of the limited performance of existing electro-optic modulators, the key element in converting data from the electrical to optical domain at high speed for optical networks. Current electro-optic modulators require extremely high radio-frequency (RF) driving voltages (> 5 V) as the analog bandwidth in ethernet ports approaches 100 GHz for future terabits per sec capacity transceivers. In comparison, a typical CMOS RF modulator driver delivers less than 0.5 V at such frequencies. Compound semiconductor modulator drivers can deliver voltage > 1 V at significantly increased cost and energy consumption but still fall short to meet the optimum driving voltage. The limited voltage-bandwidth performance in electro-optic modulators poses a serious challenge for meeting tight power consumption requirements from network builders.

Thin-film LN modulators with low voltages and large bandwidths are driving the next generation electro-optic solutions. Achieving sub-volt and mmWave-level bandwidth performances while preserving linear responses, high extinction ratios, high optical power handling ability, and low optical losses eliminate previous tradeoffs of power and speed. LN, in its traditional bulk form, is commercially deployed for high performance backbone optical networks due to its superior intrinsic nonlinear material properties that allow linear and high speed electro-optic modulation. The traditional discrete solution has been limited to high-cost, large sizes and limited bandwidth due to the lack of integration. The thin-film integrated solution that HyperLight is developing combines the superior proven material property of LN with a CMOS-like simple and scalable integration process enabling extreme performances at low-cost. The reported breakthrough design could meet the critical bandwidth, power consumption, integration and cost demand of next generation optical networking systems for decades to come.

HyperLight was formed in 2018 and received seed investment from The Engine, an early stage venture firm spun out of MIT and focused on Tough Tech. HyperLight is pioneering the commercialization of LN PICs and has served many industrial and academic customers with applications spanning datacom, telecom, quantum and metrology in the US and around the world with ultrahigh performance LN PICs since its inception.