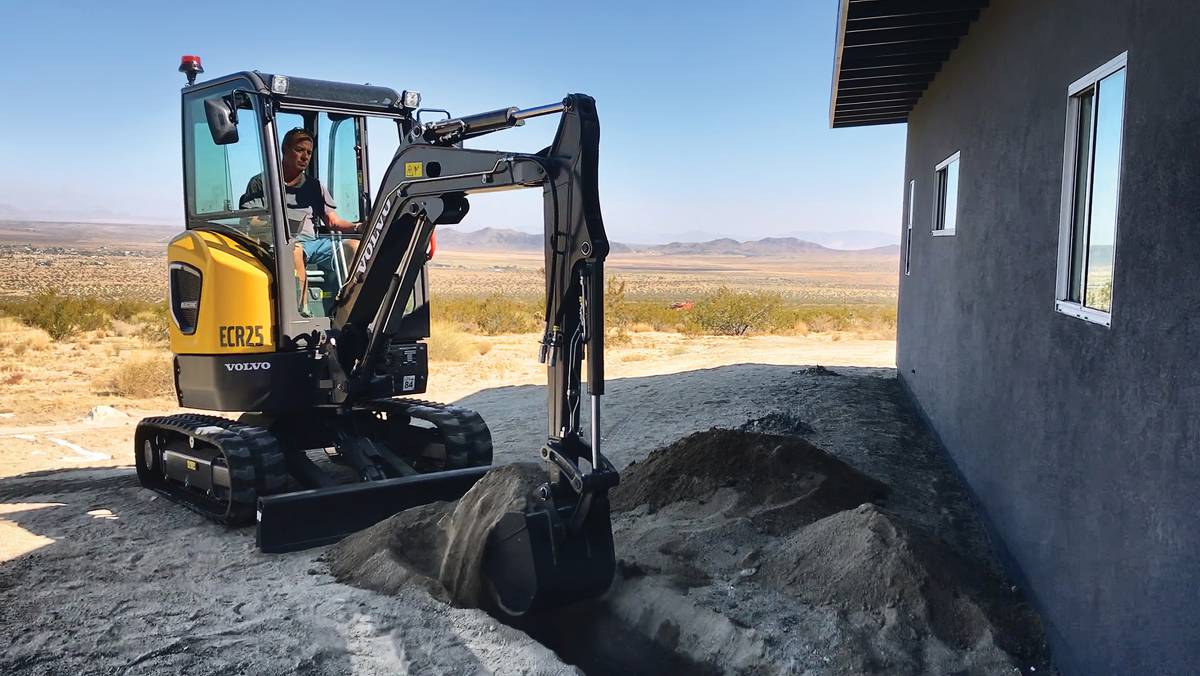 Volvo Construction Equipment is partnering with Baltic Sands Inc. out of Yucca Valley, California, to pilot two of its compact electric machines, the ECR25 Electric excavator and L25 Electric wheel loader to see how these machines perform and hold up in a remote, rugged desert environment.

The company primarily works in remote desert locations where power, water and utilities aren’t simply scarce — they’re non-existent. While the lack of a power grid initially presented a challenge with daily charging of electrically powered equipment, it didn’t stop Company Director Jacques Marais and his team from continuing their pursuit of developing environmentally responsible housing with environmentally responsible equipment. They never hesitated to become early adopters of electromobility.

“I started out in construction in my late 20s on large earthmoving projects, but the denuding of vegetation and trees never felt right,” Marais says. “I tussled with the idea of earning a decent living while at the same time realizing my responsibilities to the environment. This pilot project with Volvo CE allowed us to pursue the ideal of being more ecologically friendly through the adoption of new technologies.”

The commercial pilot is part of a $2 million grant administered by the South Coast Air Quality Management District (AQMD) to accelerate the deployment of zero emission technologies for off-road mobile equipment, which is one of the major contributors to nitrogen oxide (NOx) emissions in the South Coast Air Basin.

Electric machines prove they can hold their own

Through the VolvoCE pilot program, Jacques and his team were able to secure two electric compact machines for development work on remote sites in Southern California — and throughout the trial they were impressed with the results. 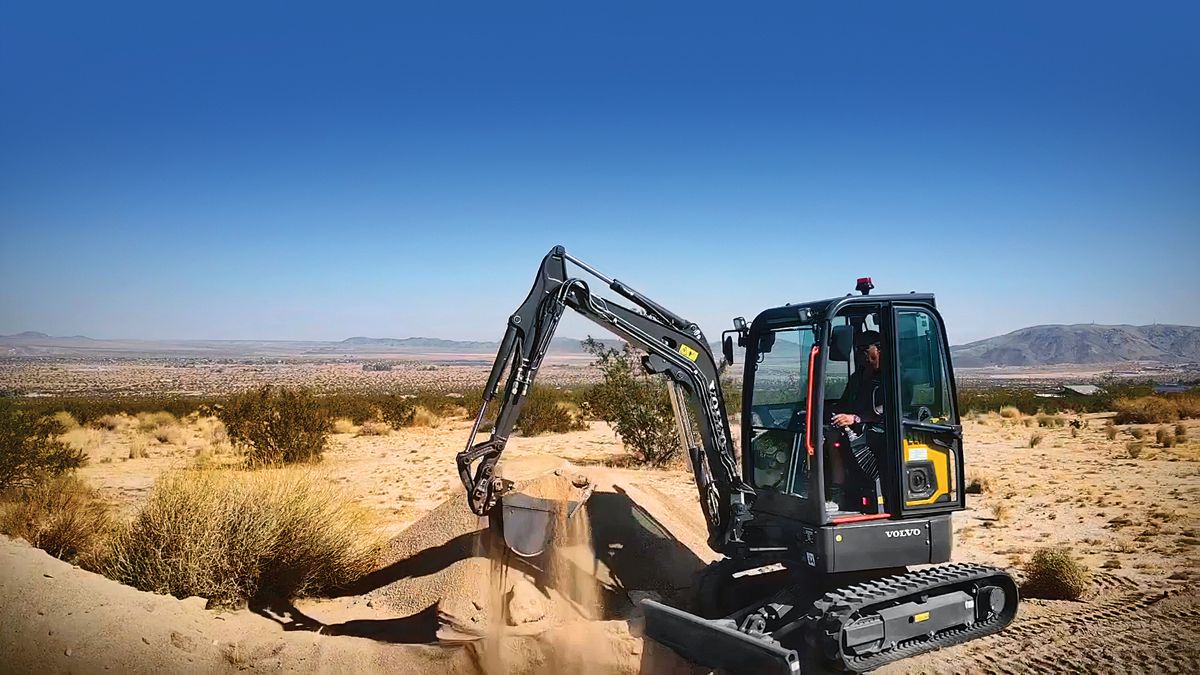 The electric wheel loader reshaped the larger areas, performed the finish grading to assist with storm water control and relocated the soil stockpiles for further processing. The machines worked together to efficiently complete eco-friendly tasks each day.

So, how did they perform compared to conventional diesel machines?

“In my opinion, they perform equally in terms of productivity,” Marais says. “They’re extraordinary, and they surprised us. In fact, we’d love to have these machines working all the time.”

Running the machines all the time became more of a reality once a planned solar array was installed. It was used to power the machines overnight and during lunch, helping the remote jobs move faster and more efficiently. 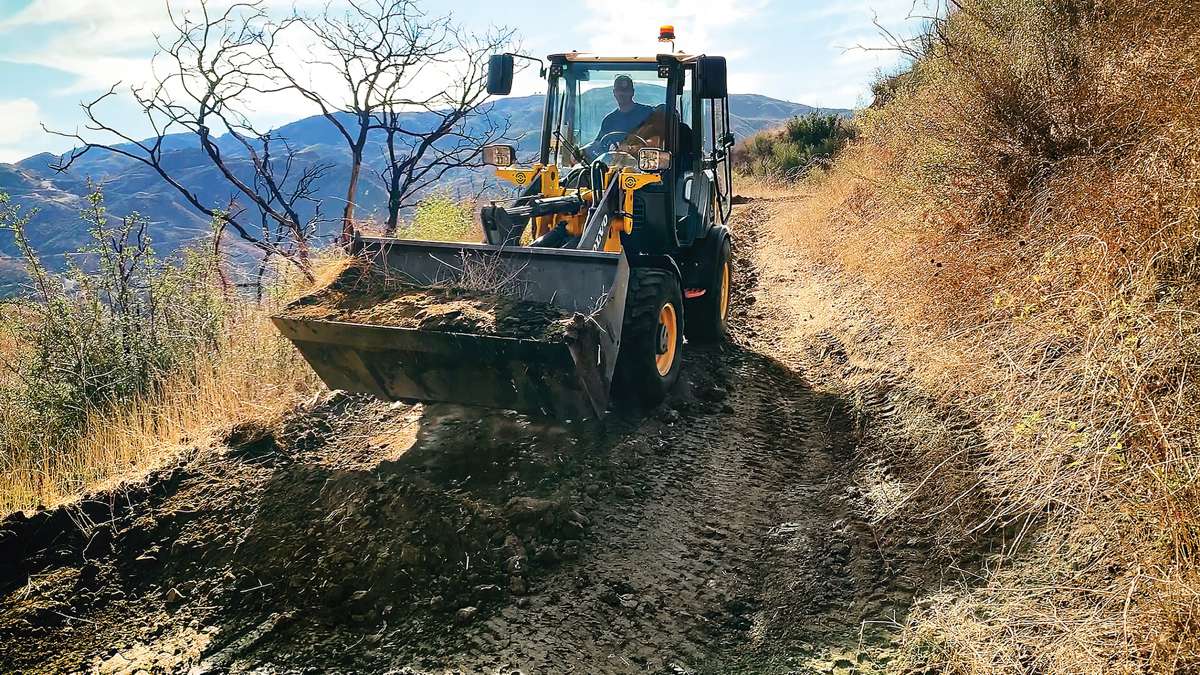 This successful operation in extreme conditions bodes well for the viability of electric machines in urban settings — and that’s welcome news to the South Coast AQMD.

“A lot of off-road emissions are in densely populated, environmental justice communities, as well as on farms,” says Ben Benoit, the organization’s Chair. “Electric construction equipment would be a great opportunity and solution for our region.”

Reaping the benefits of electric equipment now and in the future

Machine operators also benefit, with Baltic Sands’ employees experiencing less fatigue due to the lack of incessant noise and vibration. They also loved the ability to hop in and hop out and get instant power right when they needed it. One of the biggest benefits, however, was the ability to speak directly to operators from a safe distance without the need to yell.

“With these electric machines, noise isn’t a factor — you can talk to an operator as if he or she is standing right next to you,” says Aaron Anderson, Baltic Sands’ Dealer Sales Representative at Volvo Construction Equipment & Services. “Maintenance hasn’t really been a factor either. These machines were up to par for sure.”

Marais looks forward to going through the trials again in the near future with the two electric units plus a battery pack to see how charging can be simplified even more. Long term, Marais and the Baltic Sands team are looking at ways to integrate electric machines into their current diesel-powered fleet to see how diesel and electric can work in harmony.

“This is where ideology meets reality,” Marais says. “I’m mindful of that and hoping that as early adopters to electromobility, we get it right. I’m pretty excited about getting that under our belt and seeing what the future holds for our company.”