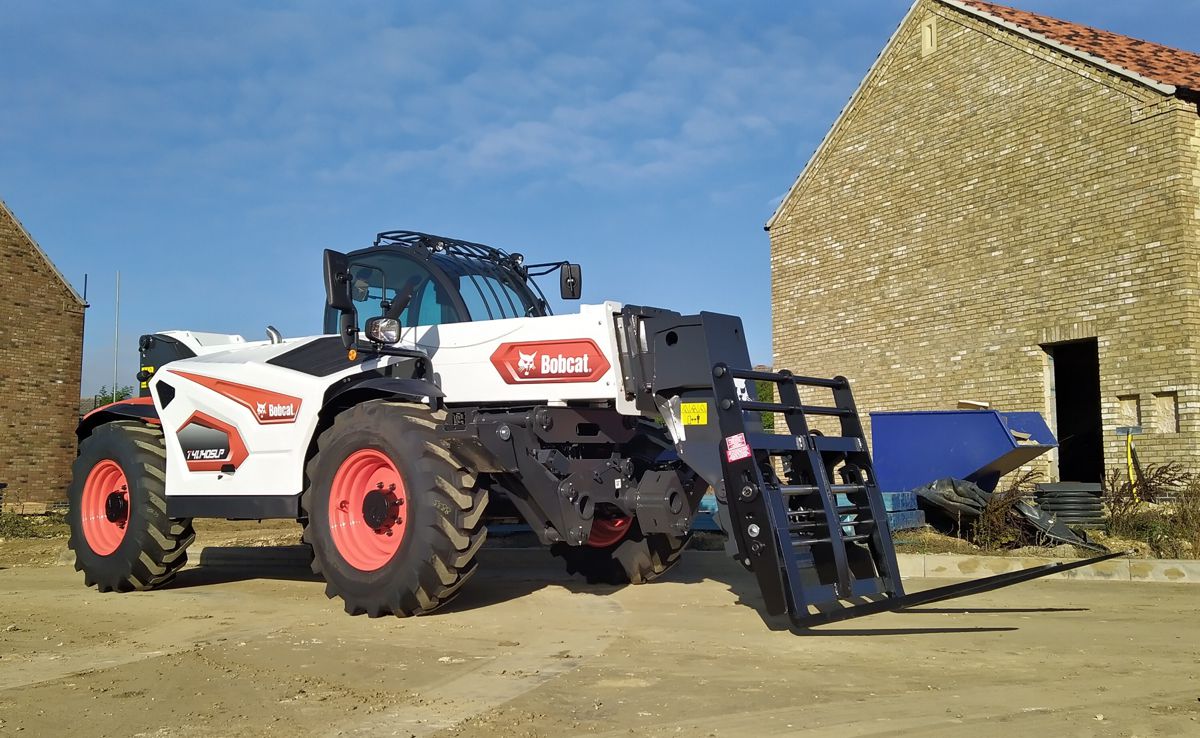 Launched earlier this year, the first of Bobcat’s new R-Series telehandlers have been delivered in the UK. The three T41.140SLP 14 m Stage V telehandlers form part of an order for five T41.140SLPs purchased by Truelove Property and Construction Ltd, based in Lincoln in England.

Established in 1968, Truelove Property and Construction is a family-run business based in the heart of Lincolnshire with over 50 years’ experience and the completion of nearly 1000 new homes to its name. Truelove also has a subsidiary farming business called Happy Days Farming Company.

The new T41.140SLP telehandlers were supplied by AMS Bobcat Ltd, the local Authorised Bobcat Dealer based in Scunthorpe. Barrie Truelove, Owner and Director of Truelove Property and Construction Ltd, comments on the move to Bobcat telehandlers: “We were not satisfied with the performance of our previous brand of telehandlers. We chose to replace them with the Bobcat telehandlers for a number of reasons including their suitability for our applications, the price, the lead time and the quality and locality of service offered by AMS Bobcat. It has been a very successful transition as all of our operators are very happy with the new Bobcat telehandlers.”

The new telehandlers are in use on current Truelove property developments at Kirton Lindsey and Nettleham in Lincolnshire, where the company is building prestigious, individual two-storey family homes designed and built for modern open plan living with bespoke kitchens and bathrooms. Truelove builds all its houses to the LABC standard, one of the three main providers of structural or ‘new home’ warranties in the UK and the company abides by the Consumer Code for Home Builders 2020.

Presiding over some of the new Bobcat telehandlers on his project is Site Manager, Henry Truelove, Barrie’s son. Henry recently completed his first Ironman challenge in Mallorca in Spain, where he performed well, narrowly missing the podium in his class. He also dedicated his race to raising well over £2000 towards the treatment costs for the mother of a good friend. She was seriously injured during a horse riding accident and was put into an induced coma for several weeks and is only now learning to walk and talk again.

​From Construction to More Success in Farming

One of the T41.140SLP units is also being used on Worlaby Farm near Brigg, where it is being employed to lift and handle steel components being used to build a new 10,000 tonne grain store at the farm.

Worlaby Farm forms part of Happy Days Farming Company. Truelove bought its first farm in January 1994 at Farndon near Newark in Nottinghamshire and then went on to buy Worlaby Farm and another in Kingerby at Market Rasen. The company has continued to grow with the acquisition of three further farms since then, with one at Snitterby in 1996 and two at Nettleham in 2006 and 2016.

Typically, the Bobcat T41.140SLP telehandler is used in construction applications, but this model can also find other uses in agriculture as demonstrated at Happy Days Farming, where the telehandlers are used for applications such as loading and stacking hay bales.

Happy Days Farming mainly concentrates on arable farming with over 5000 acres under management, but the company has also moved recently into pig production. Happy Days Farming employs all of their own labour and runs the farms themselves – the company is continually looking to expand and seek new opportunities in the farming market.

Precise Control and Placement at Height

The new R-Series telehandlers offer agility on demand, with a newly configured transmission system providing enhanced smoothness to carry out the trickiest jobs at height with surgical precision. These operations are also facilitated by the combination of the Boom Positioning System, the new updated, ultra-accurate joystick, the inching function and the improved visibility from the cab.

An enhanced inching pedal design is easier to use and reduces fatigue. A higher engine brake provides a shorter stop distance and increases safety on construction sites. Turtle/rabbit speeds are standard on all models and operated from the joystick. There is a new DYNAMIC mode for applications requiring rapid transmission response and the new optional hand throttle with FLEX DRIVE function allows for the control of travel speed independent from engine rpm.

Established in 1992, Scunthorpe-based AMS Bobcat is one of the longest standing Bobcat dealers in Europe and is approaching 30 years of partnership with Bobcat in the UK. Over the intervening years, AMS has sold nearly 4000 new Bobcat units into a wide range of industries, including construction, agriculture, shipping, plant hire, mining, landscaping and demolition.

As well as Bobcat telehandlers, AMS Bobcat is also responsible for sales and service of Bobcat skid-steer and compact track loaders, mini-excavators, compact wheel loaders, light compaction and attachments throughout Lincolnshire and South and East Yorkshire.

0 0 0
Previous : SRL acquisition to drive ambitious growth strategy in the UK
Next : Actibump looks back on 2021 International installations