Hardstaff Barriers have been providing temporary and permanent concrete security barriers for the past 26-years both in the UK and Europe. During this time the company has created a range of solutions that include products for highways, street works, perimeter security, and counter-terrorism such as Hostile Vehicle Mitigation systems.

The company also manage the National Barrier Asset on behalf of the National Counter Terrorism Police HQ (NCTPHQ), where the business manages and deploys a range of security barriers, barges and fencing for high-profile events such as State visits and Royal occasions. Hardstaff’s new Hyundai forklifts will be utilised in these operations. 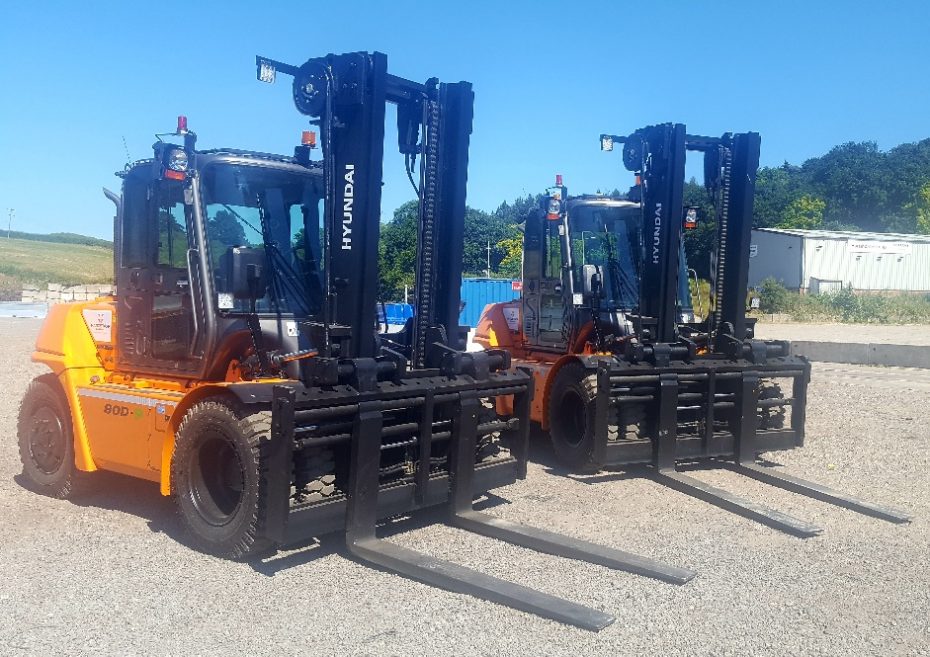 The company’s new 8-tonne 80D-9 Hyundai fork trucks are loading vehicles in addition to installing security products and their workloads can vary. The machines can carry out long shifts when working on large highways or security installs – therefore the trucks needed to be robust and reliable.

Hardstaff Barriers Director Dave Todd said, “Acclaim is our local dealer for Hyundai machines, the company approached us around 18-months ago to introduce us to the Hyundai brand. We were looking to expand our fleet and Acclaim were able to offer machines which were the best we could find to match our business requirement.

After testing other models, the 80D-9 were best suited for our operation, and closest to the other machines we operate. Two of our operators visited a local quarry to see this model in operation – and they liked what they saw. Following negotiations with Acclaim – we signed the deal.” 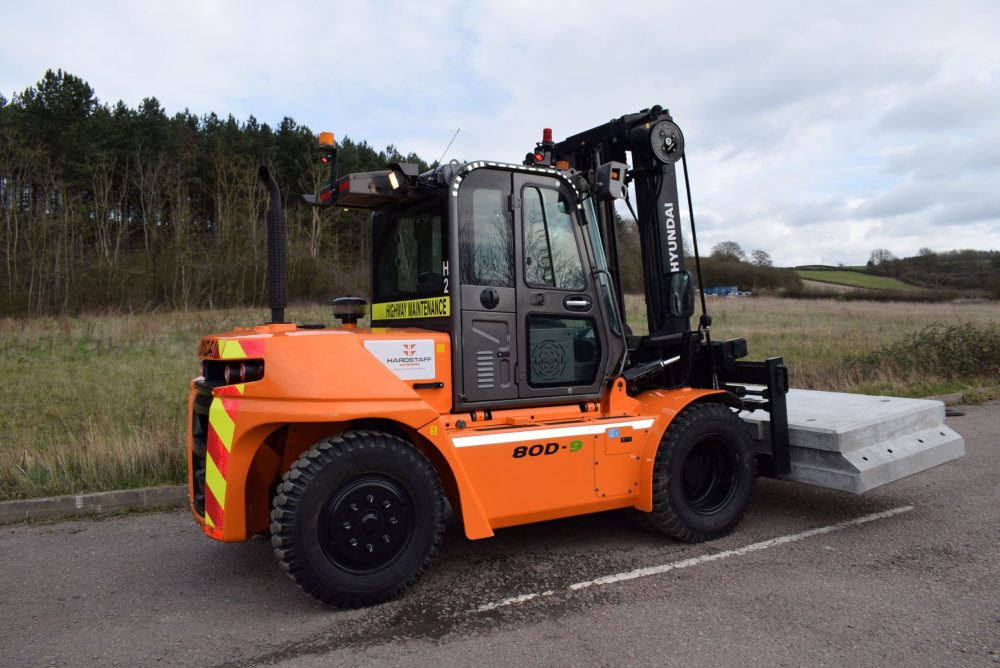 Dave continued, “The machines’ performance has been very good in the short time in operation and we have had no issues affecting productivity. The 80D-9 model comes well equipped with lots of driver extras such as air con DAB Radio, Bluetooth, however, we did have safety extras installed by Acclaim prior to Delivery, these included Red Light Pedestrian Exclusion Zone lighting and additional lighting for operators.

The new machines have been well received and the opinion of the fork lift drivers is that the Hyundai is a very good piece of equipment.”

The purchase of new Hyundai fork trucks is part of a wider investment program by Hardstaff Barriers to ensure that the business is delivering innovation and excelling at all areas of the business including Highways, Hostile Vehicle Mitigation and Perimeter security in areas such as Aviation, Ports and Nuclear sites as well as high profile events. Other investment includes employee development, new IT systems, high definition vehicle cameras, telematics and electronic data capture. 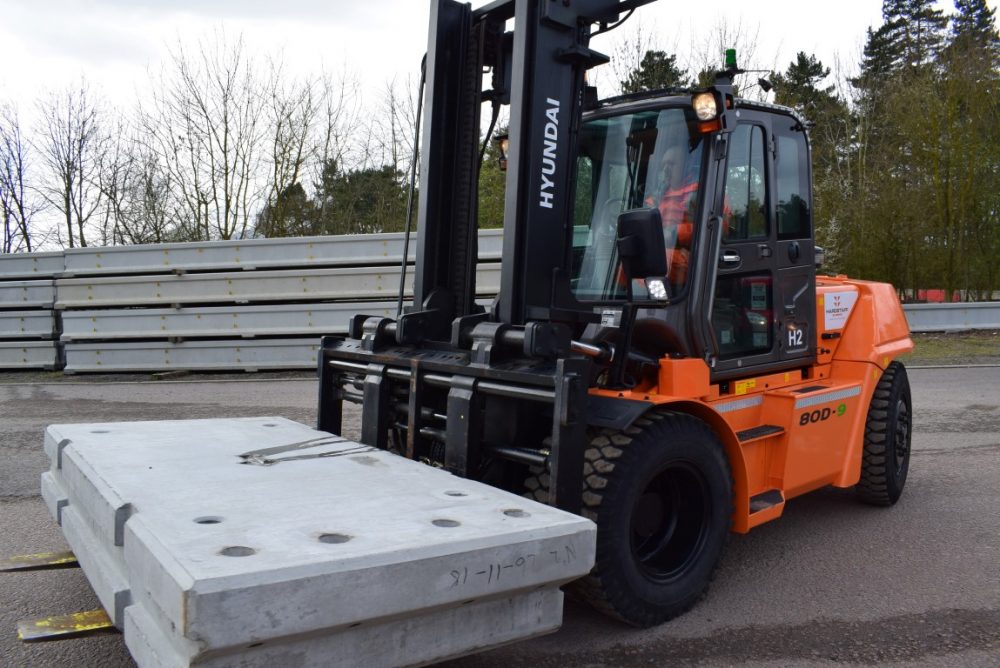 Hardstaff Barriers Dave Todd explained “By investing in our own fleet of specialist plant and vehicles, we are leading across our sectors including Highways, Perimeter Security & Hostile Vehicle Mitigation protecting major events including two Royal Weddings, and the visit of the President of the United States. We operate in wide range of other sectors including Aviation, Ports and Nuclear, delivering innovations and products for protection and delineation, ensuring safety of both workforce and general public. By providing an in-house expert capability we are very proud to be setting new standards, using very best enhanced safety technologies and increased efficiencies.”

Dave concluded, “As a business we heavily invest in the development of our teams and processes to ensure that we can deliver effective solutions for all our customers. Customers of ours include civil contractors, commercial property owners, government organisations, event organisers and private individuals. We believe that passion for doing a great job is what makes our business such a special place allowing us to innovate, evolve and grow in an increasingly competitive marketplace. 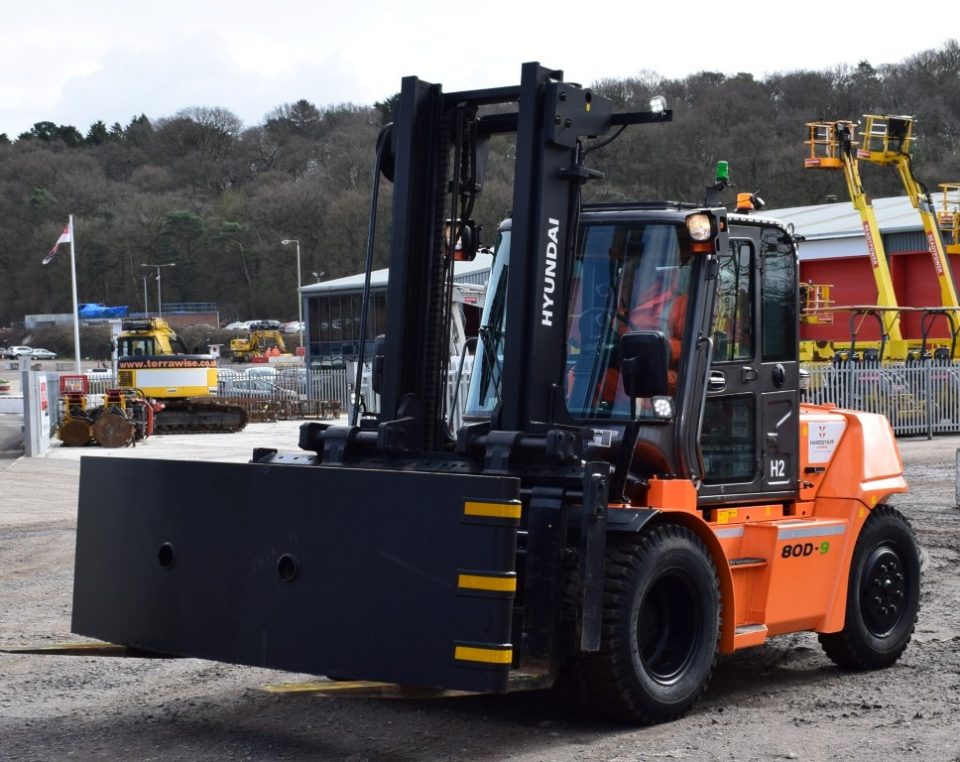 We are very satisfied with Acclaim’s support from purchase to aftersales and we would recommend their service. So much so that we are looking to purchase a further two of the same machines in the near future.”

Acclaim Handling’s Group Director, Sam Woods commented on the deal, he said, “Hardstaff Barriers are a progressive company who demand durable equipment backed by dependable service support. We are very appreciative they continue to choose Acclaim Handling and look forward to progressing a long and rewarding business relationship together.”

0 0 0
Previous : Hackney Wick station wins prestigious ICE Design Award
Next : Volvo taking on our electric future, both on and off-road