Hinkley Point C is the UK’s first new nuclear power station in a generation – it’s currently under construction and is one of Europe’s largest major infrastructure projects.

Situated on the North Somerset coast, the new nuclear power station will provide secure, low-carbon electricity for around six million homes when completed. The plant will be one of the most advanced in the world and its two EPR reactors will offset nine million tonnes of carbon dioxide emissions per year over its 60-year lifespan.

EDF Energy is the company behind the project which will eventually see a 5,600 strong workforce on-site at the peak of construction. The project will also see over three-million tonnes of concrete being used to construct the plant and an economic benefit to the region’s economy of some £4 billion over the full lifetime of the station.

Plantforce Rentals is a leading construction equipment rental company headquartered in Somerset, with additional depots across the West Country and the Midlands. The company owns a fleet of almost 100 Hyundai machines ranging from six tonnes up to 52 tonnes, which include loading shovels, crawler and wheeled excavators, supplied by and maintained through dealers Molson Group in Avonmouth. 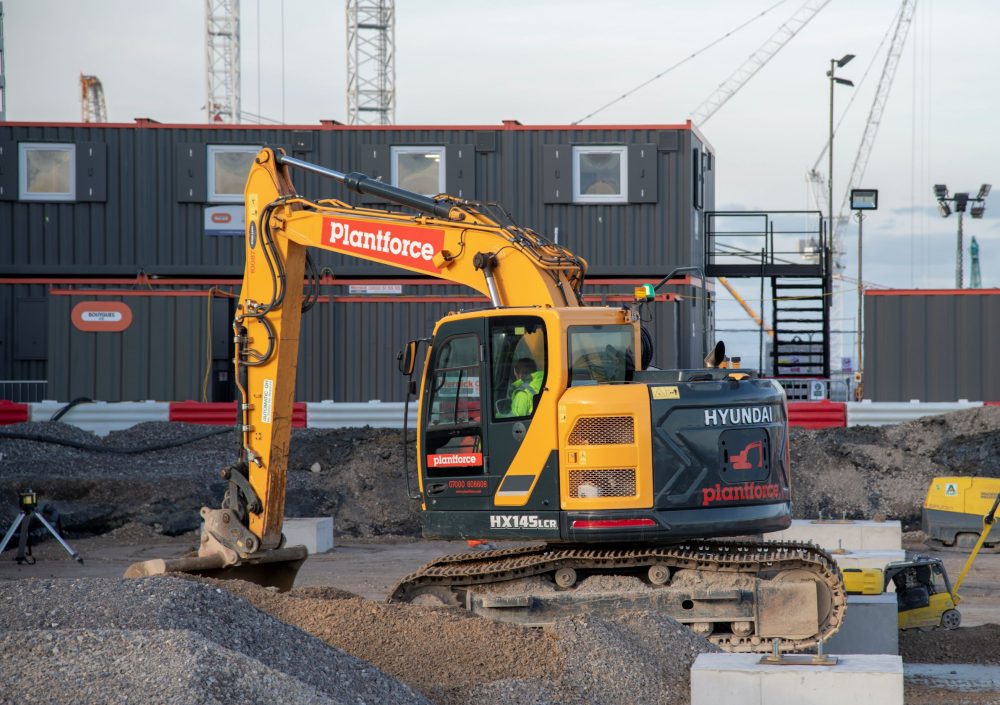 Plantforce Rentals is currently carrying out the majority of the earthworks on the Hinkley Point C site and is the leading plant supplier on site.

With over 1,000 machines and 250 attachments in the fleet, the business has seen huge growth over recent years and when the opportunity arose for the company to become the first plant hirer at the Hinkley project, they felt it was an opportunity too good to miss. Already working within the industry, the company was in an ideal position to be able to supply the project with personnel, machinery and the associated management structure to back them through the complicated project.

Plantforce Marketing Manager Dale Hawkins talks about some of the Hyundai machines on the project, which includes a brand-new 52 tonne, HX520LC.

Plantforce has a large quantity of equipment situated around this huge site. Dale comments “Forming part of our fleet on the Hinkley site are 15 Hyundai’s – we have a range of wheeled machines including ‘ducks’ and loading shovels, in addition to tracked excavators ranging from 14 to 52 tonnes.”

One of the larger items on the Plantforce stock list at Hinkley is a Hyundai HX520LC – the machine is fitted with a huge Geith fixed-leg rock grab. With the earthworks almost at an end, one of the tasks set for the mammoth Hyundai was completing a section of rock armour installation.

Dale added, “The rock armour defence has been installed while the primary 13.5m sea wall, built to protect the operational station, is under construction. The 52 tonne HX520LC is able to handle the granite boulders effortlessly! One of the main reasons we invested in the HX520 was for its immense power!”

Thanks to the decent road conditions on the Hinkley site and the fact that much of the work is now undertaken on good ground, Plantforce also supplied a number of Hyundai wheeled excavators into the project. 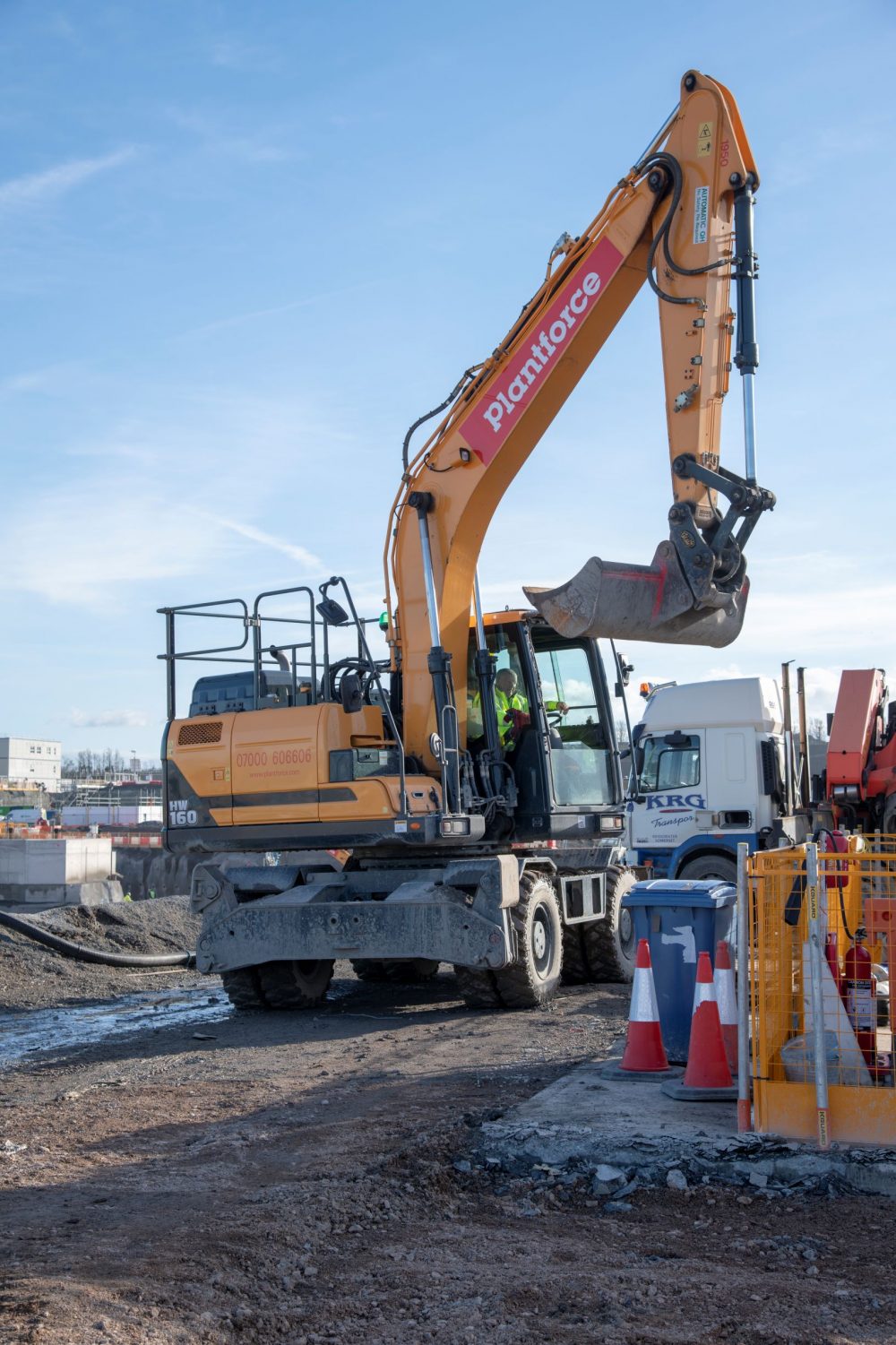 The company runs a number of 14-17t models with the latest addition being an HW160 complete with tipping trailer, FHOSS Halo lighting system, night branding, an Engcon tilt-rotator, Prolec height & slew restriction and SiteZone proximity device, this spectacular machine was created in an innovative bid to reduce workers in the danger zone whilst also being more efficient in day to day works.

“We are always looking for cost-effective solutions for different markets.” Dale explains “We have specified this particular machine to show the Hinkley Point C contractors what we are capable of and what we can do to make operating an excavator even safer. They have been particularly impressed with the result and this has spurred us on as a company to look for other ways of adding additional value to a piece of equipment.”

The larger Hyundai machines are equipped with GPS machine control systems. Early days on the project saw a more conventional approach to setting out but the decision was made to take the whole site digital. Dale explained, “We could all see the benefit of removing operatives from the working area straight away.

Hinkley Point C has bought into GPS machine control in a very big way, working alongside Plantforce, Leica Geosystems and Optical Survey Hire they have created what could only be described as an ‘information superhighway’ by connecting all the machines and using the full available spectrum of machine control and engineering workflows.” 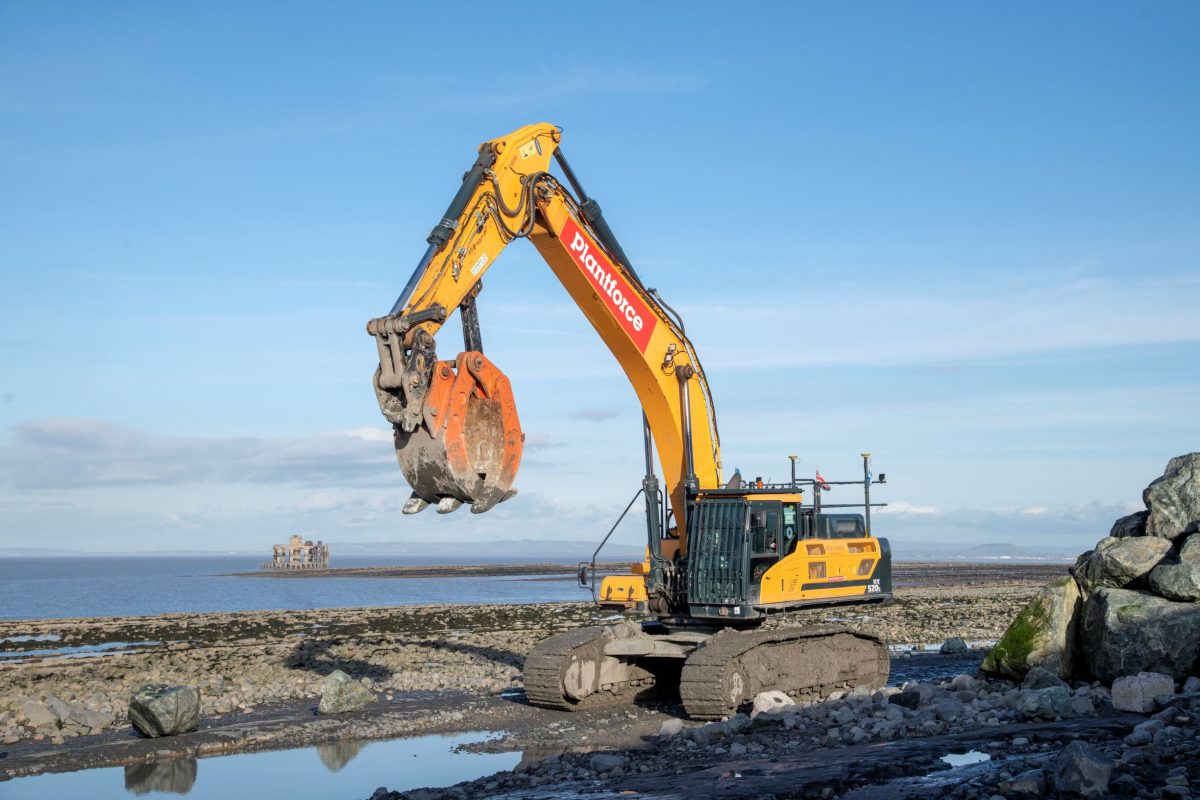 Dale added, “This means that from any point on the site an operator can dial his or her machine into the system and commence work without the need for an engineer to come and set up profile boards.

The project still has a number of engineers who will regularly double-check the works, but the installation of the system has been a massive success and has significantly reduced the amount of over dig resulting in the management of less material. We have also assisted in a huge amount of GPS training for the operators on-site and this is then reflected in their opportunities for the future.”

Dale concluded, “As a company, Planforce is committed to investing in plant machinery that has the capability to interface with market-leading machine control and safety systems. This is of paramount importance when working on a complex construction project such as Hinkley Point C. The Hyundai machines, which form part of our growing fleet, meet and exceed the criteria, which is why we continue to invest in the brand.”

0 0 0
Previous : CASE wheel loaders battling the snow in the Arctic Circle
Next : Portsmouth recycling centre brings in the Volvo specialists