North West based specialist surfacing company, Miles Macadam, is leading the way as an SME in the industry by gaining Carbon Assessed Organisation status and committing to become carbon neutral. This comes as several councils declare climate emergencies.

Specialist surfacing company, Miles Macadam has committed to becoming one of the first industry leaders to become carbon neutral. This follows a world-wide initiative to reduce carbon emissions, the EU’s commitment to carbon neutrality by 2050 and a number of UK local authorities following its lead.

Miles Macadam has committed to become a ‘Carbon Assessed Organisation’ and by appraisal will be awarded a license to use the “Carbon Footprint Standard”. This is recognition of Miles Macadam’s overall commitment to becoming carbon neutral by the end of 2020 and to encourage responsible and sustainable best practice within the surfacing industry as a whole.

To achieve carbon neutrality Miles Macadam will create a balance between the carbon emitted and carbon absorbed in its daily business practice.

As part of their strategy, Miles Macadam is reviewing its own surfacing processes relative to environmental impact, whilst identifying the possible benefits of its own Grouted Macadams in lieu of conventional surfacing materials. Miles Macadam’s products have significantly lower mixing temperatures (up to 40º lower) than traditional materials such as SMA or hot rolled asphalt, allowing Miles Macadam’s products to be classified as ‘warm mixes’. The sustainable benefits are apparent with carbon savings of up to 25% through lower production and laying temperatures and an overall reduction in the use of fossil fuels during the manufacturing process.

In addition, the benefits of laying Grouted Macadams, such as Hardipave™ and Hardicrete™, mean that no additives are required to increase mobility and performance in the support coats, in either winter or summer. These factors, combined with the Grouted Macadams’ high performance and longevity, reduces their long-term environmental impact and undoubtedly will be regarded as huge positives in Miles Macadam’s Carbon Footprint assessment. 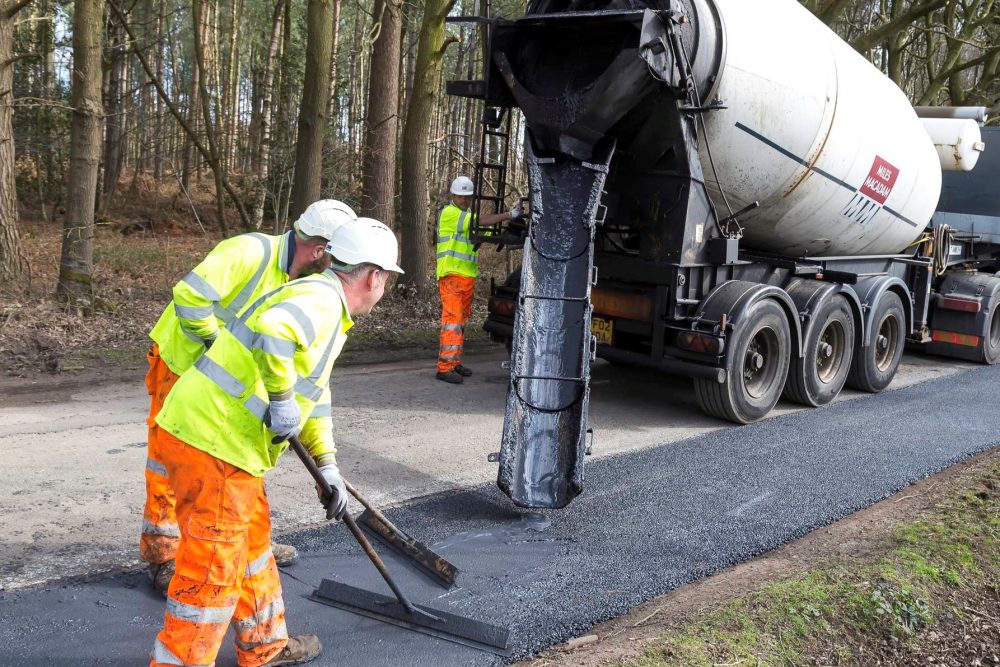 Miles Macadam is looking forward to off-setting its carbon usage and to become certified as Carbon Neutral company in 2020. It also endeavours to take on more carbon offsetting on its clients’ behalf; this will reinforce the company’s commitment to facing up to the challenges of climate change and aim to encourage others to follow its lead.

Kit Ebben, Director at Miles Macadam, comments: “West Berkshire’s recent declaration of a climate emergency and aim to be carbon neutral by 2030 is significant and no doubt many other local authorities will follow suit.

“As such, local authorities will be looking for their supply chain to respond and to work collaboratively to achieve their aim.

“As a responsible company and employer, Miles Macadam is proud to be taking this initiative forward as a Carbon Assessed Organisation. This will not only benefit us and our clients but hopefully will have a positive effect on tackling climate change.”