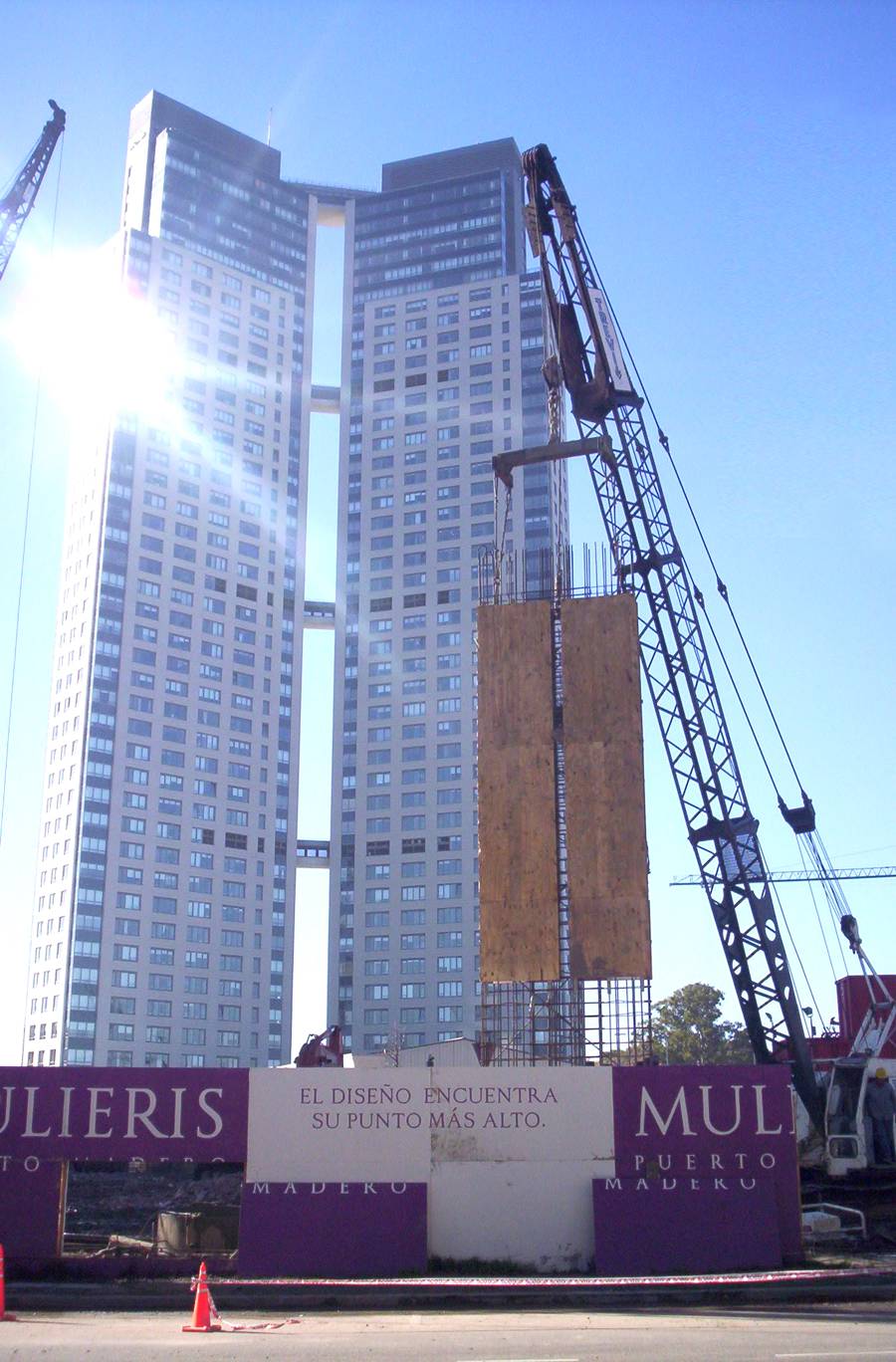 The Mulieris Towers are one of the most ambitious constructions in the Autonomous City of Buenos Aires and are in an area characterised by modern buildings.

Standing in front of the entrance door of Tower No. 1, on Boulevard Azucena Villaflor, a young woman comments that she cannot look up for a long time because of vertigo. And it’s no wonder, because when she looks up and aims at the highest point of the building, she sees a concrete walkway, dotted with an infinite number of windows that get smaller and smaller and seem to have no end point. With over 170 m, these towers become imposing and generate a feeling of vertigo. Some say that on a clear day, with a clear sky, it is possible to see the coastline of Colonia del Sacramento, Uruguay.

In Latin, the word mulieris means “women”. And it is no coincidence that the towers we are going to refer to are named after women, since Puerto Madero, where they are located, is a living tribute to femininity. For example, most of the streets in the district are named after women who have left their mark on our country. Among them, Alicia Moreau de Justo, feminist activist and co-founder of the Permanent Assembly for Human Rights; Cecilia Grierson, Argentine doctor and founder of the School of Nurses; Macacha Güemes, sister of Salta’s Lieutenant Martín Miguel de Güemes, with whom she fought in the War of Independence; Lola Mora, artist and urban planner, sculptor of the Monumental Fountain of the Nereids. This is not a minor detail, bearing in mind that, broadly speaking, the street map of Buenos Aires has male names. 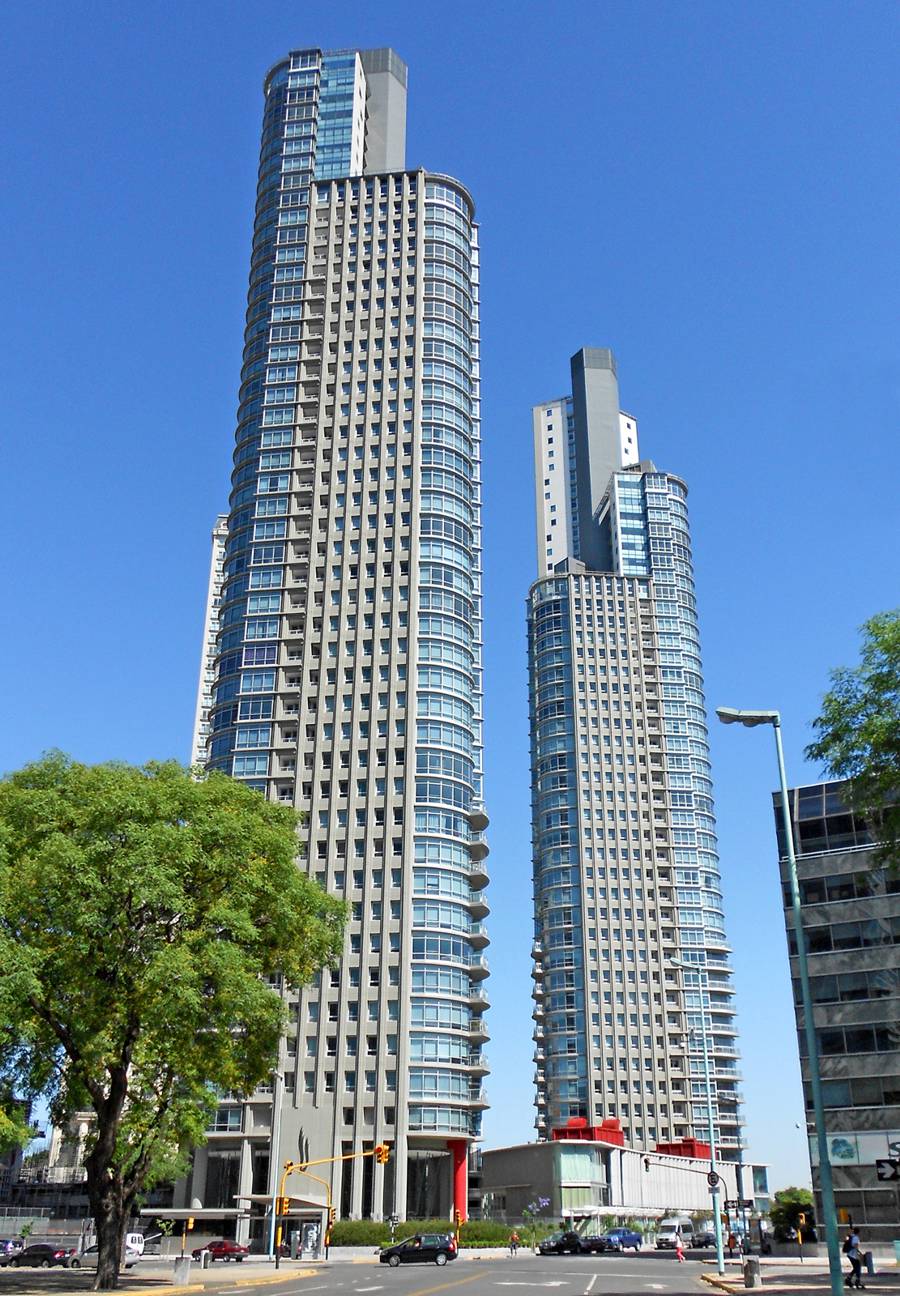 The complex, located in Dam 2, was built on an area of 6,792 m² and consists of two buildings with 44 floors each, offering a wide variety of services. These include outdoor pools, an indoor pool, a car wash, a party room, business premises, a gymnasium, a children’s playground, meeting rooms, changing rooms and a garden. Not to mention the 16 lifts that make life easier for the locals. In short, a mini city. 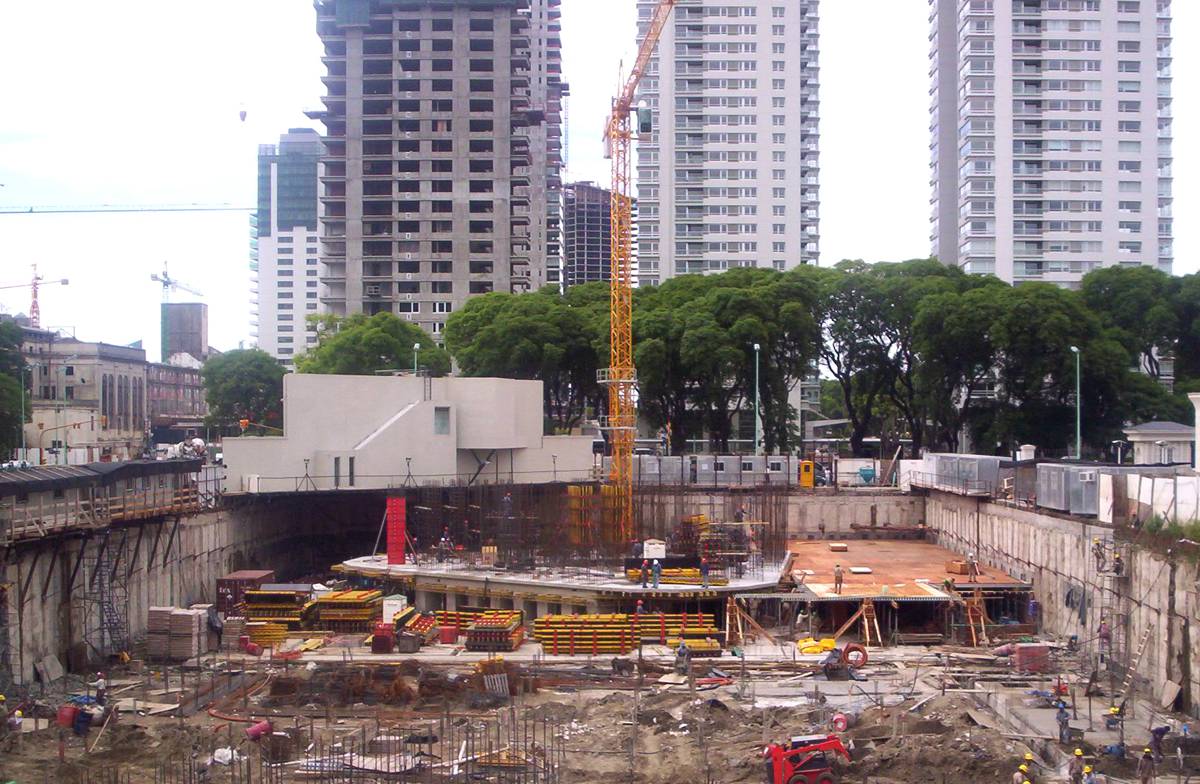 At the start of the project, Pilotes Trevi was contracted by the client Crearurban S.A. and carried out the works between March 2006 and September 2007. In approximately one and a half years, foundation works were carried out, using technologies for the execution of reinforced concrete slurry wall, grouted anchors, and tension piles for the foundation of the towers and to counteract the underlying hydraulic thrust. Although this was not one of the company’s most important works, it was nevertheless one of its many contributions to the development of the flourishing Puerto Madero. A district that has undergone a relevant transformation since the late nineties, from being an abandoned port centre to becoming one of the city’s most sought-after locations. Pilotes has been involved in the execution of several works, including the Le Parc Towers, the Renoir Towers, the Yacht Towers, and the iconic Puente de la Mujer (Woman’s Bridge). The latter is probably the most important contribution made to the area. 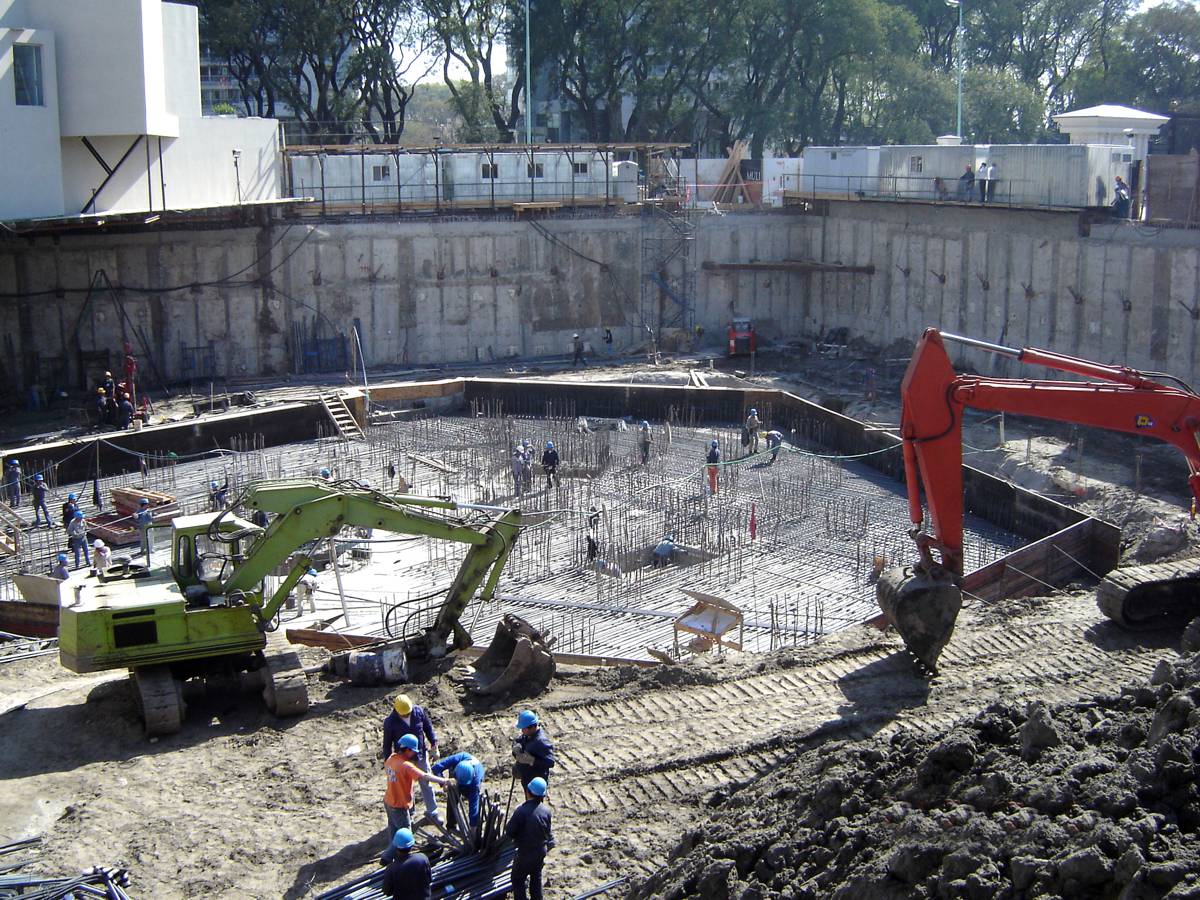 Designed by the Valencian architect Santiago Calatrava, the Puente de la Mujer is one of the Capital Federal’s most popular tourist attractions. This monument – 170 m long and 34 metres high – is visible from the Paseo Colón avenue and represents a couple dancing the tango. By way of orientation, the pylon symbolises the man and the curvature symbolises his partner. Although, to be honest, it is a difficult image to decipher.

Puerto Madero is the area of Buenos Aires that has developed most in recent decades. A young neighbourhood that boasts innovative ideas and has a modern personality. Even in these times of female rights claim, it can be said that it is an avant-garde place. Well, companies like ours leave their mark on the place they have crossed. However, the question remains whether this legacy also applies in reverse. 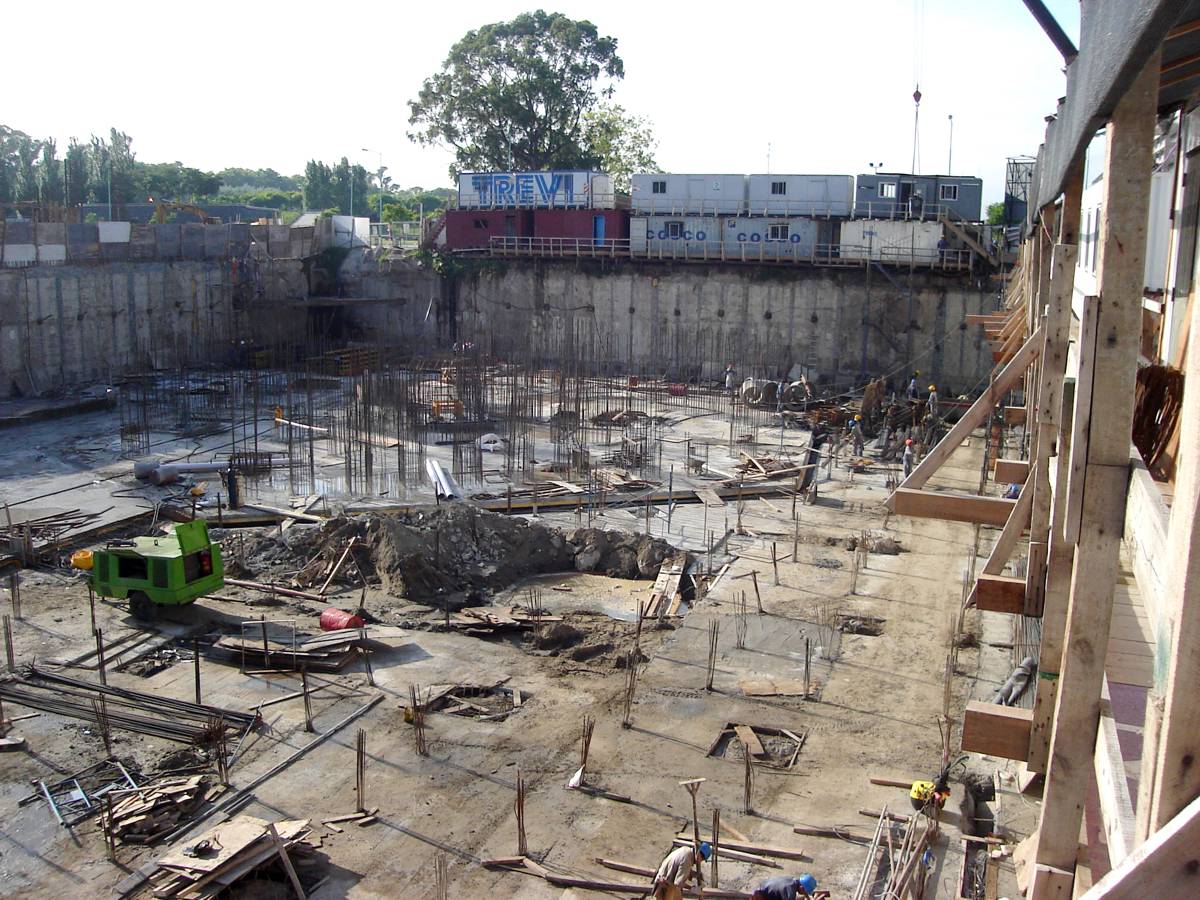 Florencia Velo is a civil engineer and has been with the company since May 2008. She currently holds the position of Technical Office Manager and manages personnel. She believes that “in recent years, the role of women in Pilotes is changing. I remember that when I joined Trevi there were very few women in the company, especially in the technical area. However, today there are many women both in the technical and commercial departments.” She concludes, “our role has advanced a bit, in line with the changes in society.”

The Trevi Group is a worldwide leader in the field of soil engineering (special foundations, soil consolidation, recovery of polluted sites), in the design and marketing of specialized technologies in the sector and in the construction of automated, underground and multi-storey car parks. The Group was established in Cesena in 1957; it has around 70 companies and, with its dealers and distributors, is present in 90 countries. Internationalization, integration and the continuous exchange between its two divisions are among the reasons for the success of the Trevi Group: Trevi, which carries out special foundations and soil consolidation works for large infrastructure projects (subways, dams, ports and docks, bridges, railway and highway lines, industrial and civil buildings) and Soilmec, which designs, manufactures and markets machinery, systems and services for underground engineering.