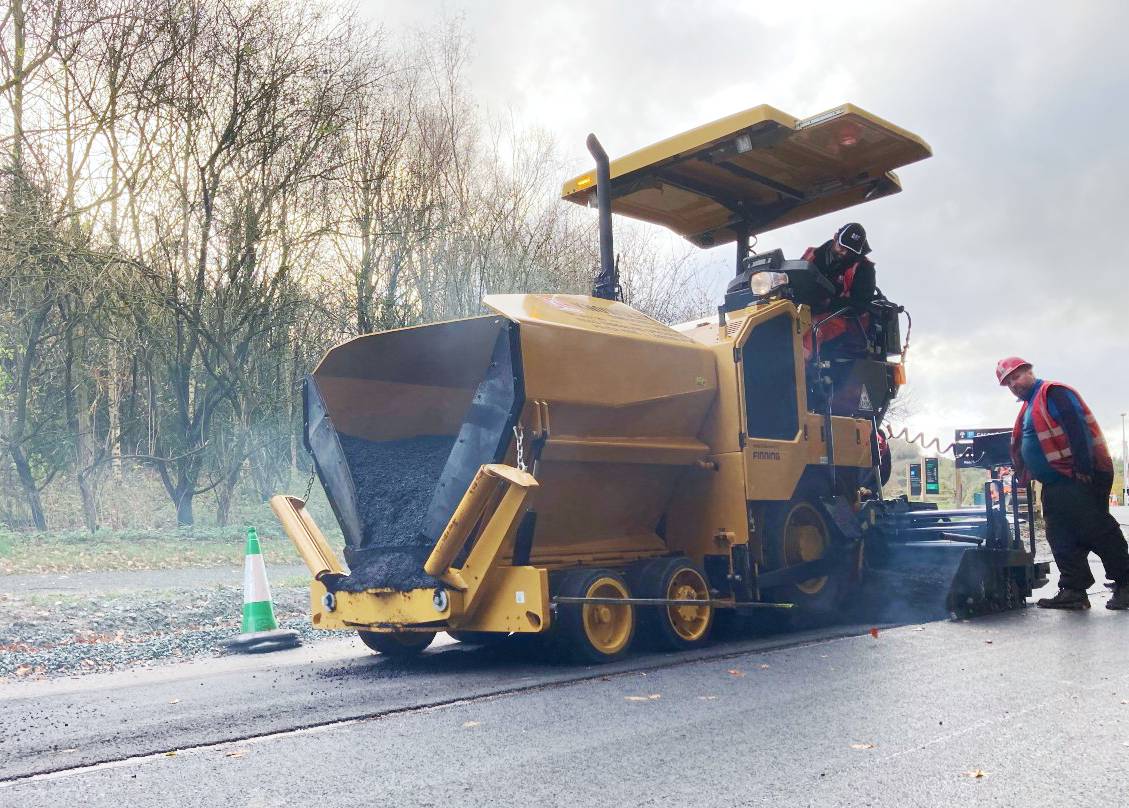 Knowsley Surfacing diversifies with a small Cat Paver from Finning

Knowsley Surfacing diversifies with a small Cat Paver from Finning

Knowsley Surfacing is a tarmac and asphalt contractor based in Liverpool. To add versatility to its fleet of pavers, the company turned to Finning UK & Ireland, the region’s exclusive distributor of Cat® equipment.

Established in 2009, Knowsley Surfacing operates across the UK, working on high-profile projects including the resurfacing of roads, car parks and driveways. Over the years, the company has invested £1 million in new equipment and has maintained a track record for progressing through projects quickly and efficiently. In fact, in 2018 alone it laid 140,000 tonnes of asphalt.

Most recently, Knowsley Surfacing has been contracted by some of the largest retail businesses in the UK, including supermarkets like Aldi, Lidl and Morrisons, and drive through food outlets like McDonalds and Starbucks. In 2020, when the UK’s national lockdown led to citizens relying on such businesses even more, Knowsley found itself more in demand then ever before.

“I’ve been in the tarmacking industry for 33 years and my work with Knowsley takes me all over the UK — I can be in Inverness one day and in Gosport the next,” explained Mick Lawson, Contracting Director at Knowsley. “While we’ve traditionally done a lot of work for petrol stations, growing interest from supermarkets and drive through restaurants inspired us to invest in new equipment.”

Knowsley purchased its first Cat equipment in 2012, opting for an AP300 paver from Finning after experiencing problems with its existing machine from a different manufacturer. After four years of success with Cat pavers, Knowsley purchased two further AP300Ds, an upgrade on the first model.

By 2020, Knowsley’s was running a fleet of large machines, which were perfect for its usual line of work. However, large pavers can be problematic for certain applications, because it can be challenging for the operator to navigate obstacles like bollards and to turn in tight spaces. Therefore, the company decided to increase the versatility of its paver fleet by investing in two smaller machines. This would allow Knowsley to work on a wider range of job sites and gain a competitive advantage.

Having already made several purchases from Finning in the past, Knowsley approached the Cat dealer once again in 2020 and purchased two new AP300F wheeled asphalt pavers, a newer and more versatile model. 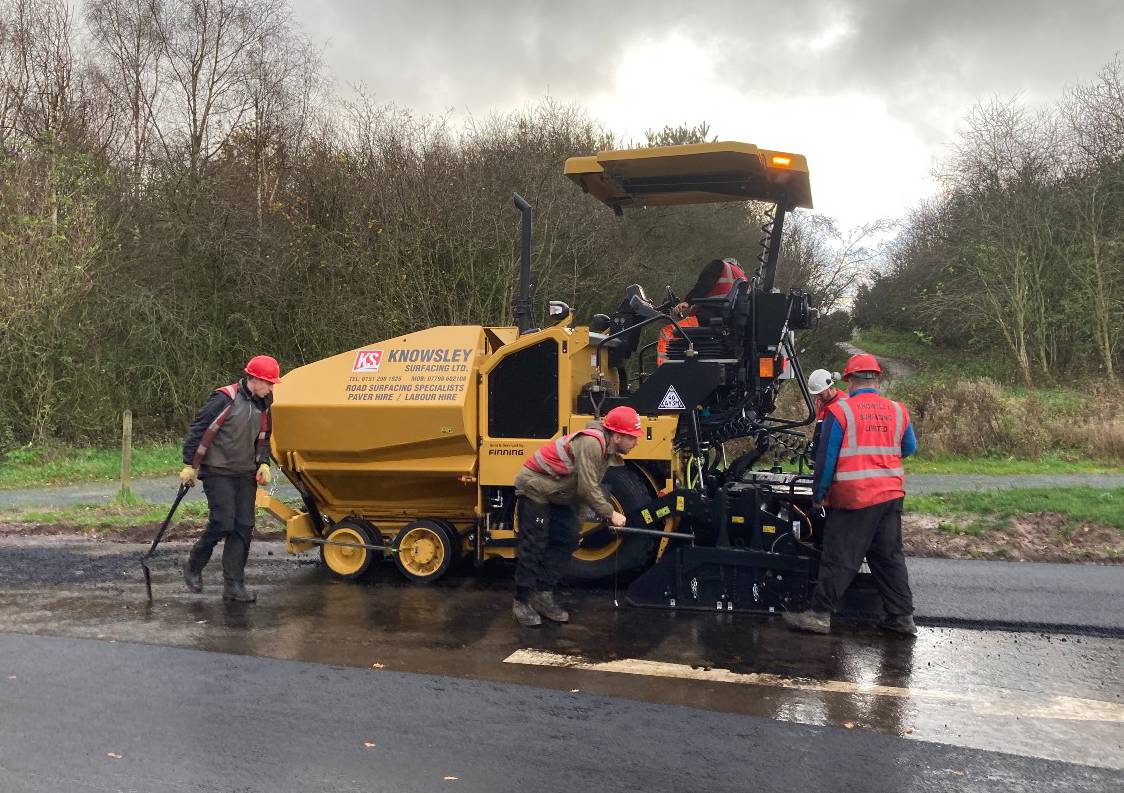 Because of its existing relationship with Finning, Knowsley was already in regular contact with its sales and engineering teams. When Knowsley explained its needs and why it had decided to make another purchase, Finning suggested the AP300F and outlined its various features. Finning also compared the new machine with Knowsley’s existing pavers to demonstrate how the AP300F could streamline its projects. For example, the machine has three separate steering modes and rear drive wheels that can partially steer the machine, making it easy to manoeuvre around job sites.

“The AP300F is the lightest paving machine on the market, which results in minimal ground pressure that reduces sticking,” explained Paul Walton, Sales Manager for Paving and Compaction at Finning. “Its main benefit is being able to navigate streets, walkways and other places that large machines can’t. It even has a new manoeuvre mode that helps operators turn in compact areas. Also, its large hydroflated 365/80 drive tyres combined with the front wheel assist option improves traction.

“Because we were already so familiar with Knowsley’s line of work, the AP300F seemed like the obvious solution,” continued Walton. “The versatile machine has a paving range from 1.75 m to 3.4 m, which means operators can cover carriageways up to 2.7 m wide. This was the sweet spot for Knowsley — exactly the kind of project it was bidding for.”

The new model also came with several upgrades, including an intuitive material feed system that operators can activate with a single switch. It also features a new ‘Jack Down’ self-recovery function, where the machine can lift itself out if it gets stuck because of poor ground conditions. This unique function means the paver can be removed from the area without relying on large trucks.

“There’s no point having a large machine if it’s just going to be sat in the yard all day,” continued Lawson. “The AP300Fs are user-friendly, flexible little machines — perfect for what we’re doing. Our operators are now experienced at using Cat pavers and they’ve noticed that the machines become more sophisticated with every upgrade. For example, the size plates line up perfectly on the new model and there’s even a holder for our shovels on one side.”

Since purchasing the new machines, Knowsley has been putting the AP300Fs through their paces. The company has been working on several petrol stations and retail sites and, in late 2020, it took one of the new pavers to the Isle of Man to resurface a car park.

“The project on the Isle of Man was completed in a week and we immediately knew we made the right choice of machine,” added Lawson. “With reduced material handling and the new steering modes, we can pave as efficiently as possible without getting blocked in. This has already reduced timescales—a project that would normally take three days now only takes two!”

“The AP300F is the first small Cat paver with an electric engine, which means it requires less power than previous models. Knowsley’s operators can easily manage power output while saving on fuel,” continued Walton. “It also has a matched hydraulics system and the engine is efficient and suited to smaller sites. Therefore, the machine isn’t sat idle, wasting time and money. Instead, it’s busy working and doing what a paver does best!”

“We really enjoy working with Finning, we have a good relationship and Paul, our sales manager, has become a good friend of mine,” continued Lawson. “Paul often drops by our office and we know that if there’s a technical issue, Finning will be able to help us. We’ve never seen this with any other company before and this support has been crucial.

“The next time we add to our fleet, I won’t hesitate to contact Finning. As we continue with these projects post-lockdown, having a good relationship with our equipment supplier will be extremely valuable to us,” concluded Lawson.

Other features of the AP300F that can be included are simplified heating technology, heated end gates and a dedicated wash down system with its own tank. The AP300F offers a standard vibratory compaction screed, offering excellent results in all materials. However, a tampering and vibratory screed is available if required. The machine is also available on Cat Finance, with zero per cent interest on parts and service for 24 months.

Want to add versatility to your fleet? Find out more about the AP300F wheeled asphalt paver on the Finning website.