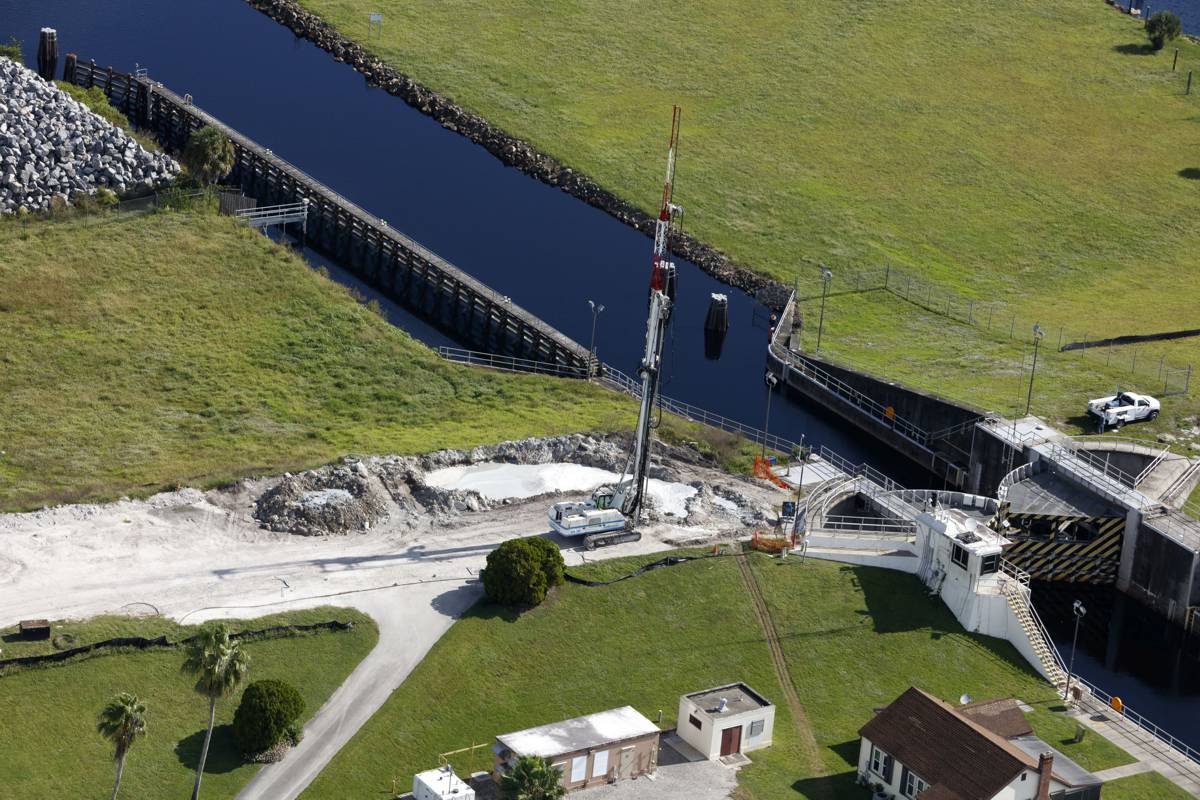 Since 2008 TREVIICOS, the North American subsidiary of the Trevi Group, a worldwide leader in the ground engineering and special foundation industry headquartered in Italy, has been involved in the Herbert Hoover Dike rehabilitation program headed by the U.S. Army Corps of Engineer.

By the end of 2022 all the efforts undertaken about to come to a successful end and TREVIICOS will be completing its last Task Orders.

The Herbert Hoover Dike is a 143-mile earthen dam that surrounds Lake Okeechobee, the second largest freshwater lake within the United States, located in south central Florida. The Herbert Hoover Dike was constructed in multiple phases, starting in 1910, for the purpose of flood risk management, navigation, agricultural and municipal water supply, prevention of saltwater intrusion, recreation and the enhancement of environment resources. 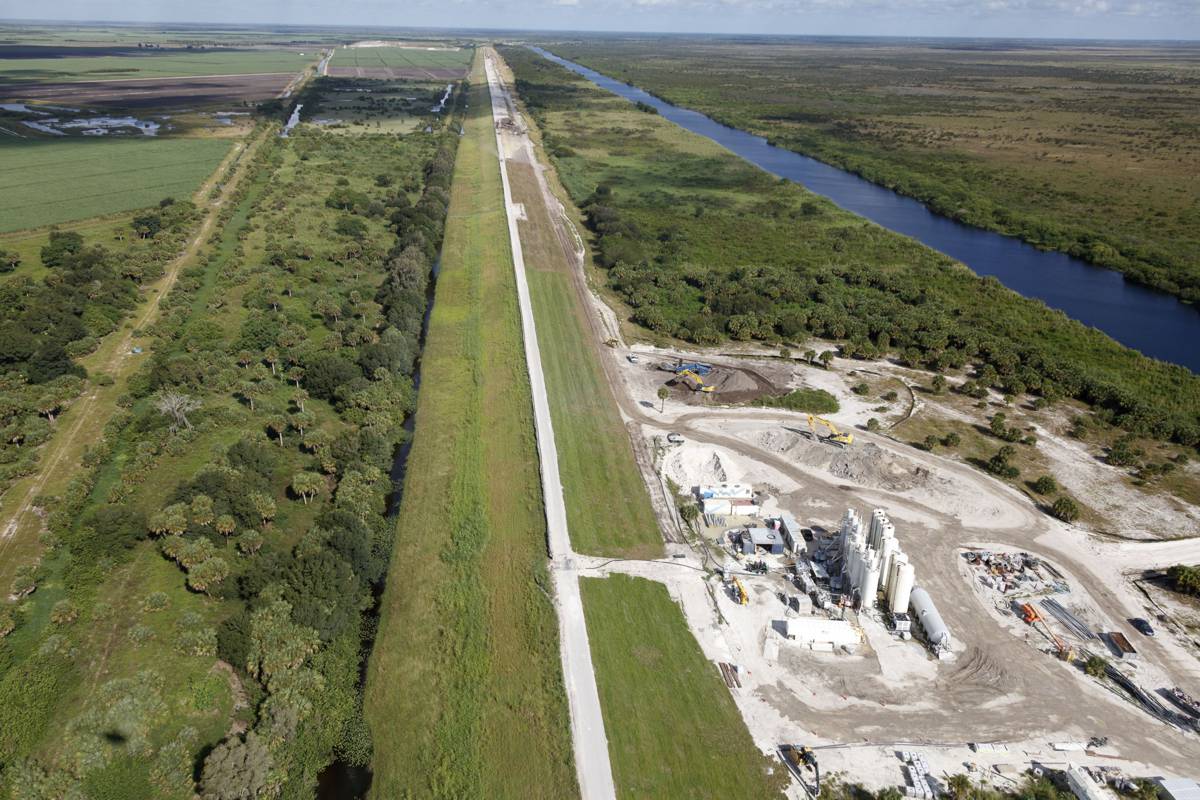 In 2007, the US Army Corps of Engineers classified Herbert Hoover Dike an unsafe water control system, with the risk of catastrophic failure, such as to possibly cause uncontrolled water release. In the same year, the Corps released a Multiple Award Task Order Contracts solicitation for the dike rehabilitation.

The rehabilitation was designed to improve the dike’s stability by minimizing the water seepage thorough its foundation soils through the installation of a cutoff wall acting as an impermeable barrier along the levee’s crest alignment.

TREVIICOS has completed seven Task Orders installing approximately 7.2 million SF of cutoff wall to a maximum depth exceeding 25,9 meter (85 FT) substantially rehabilitating well over 42 kilometres (25 miles) of the Dike and operating as specialty General Contractor in all the project they were involved. 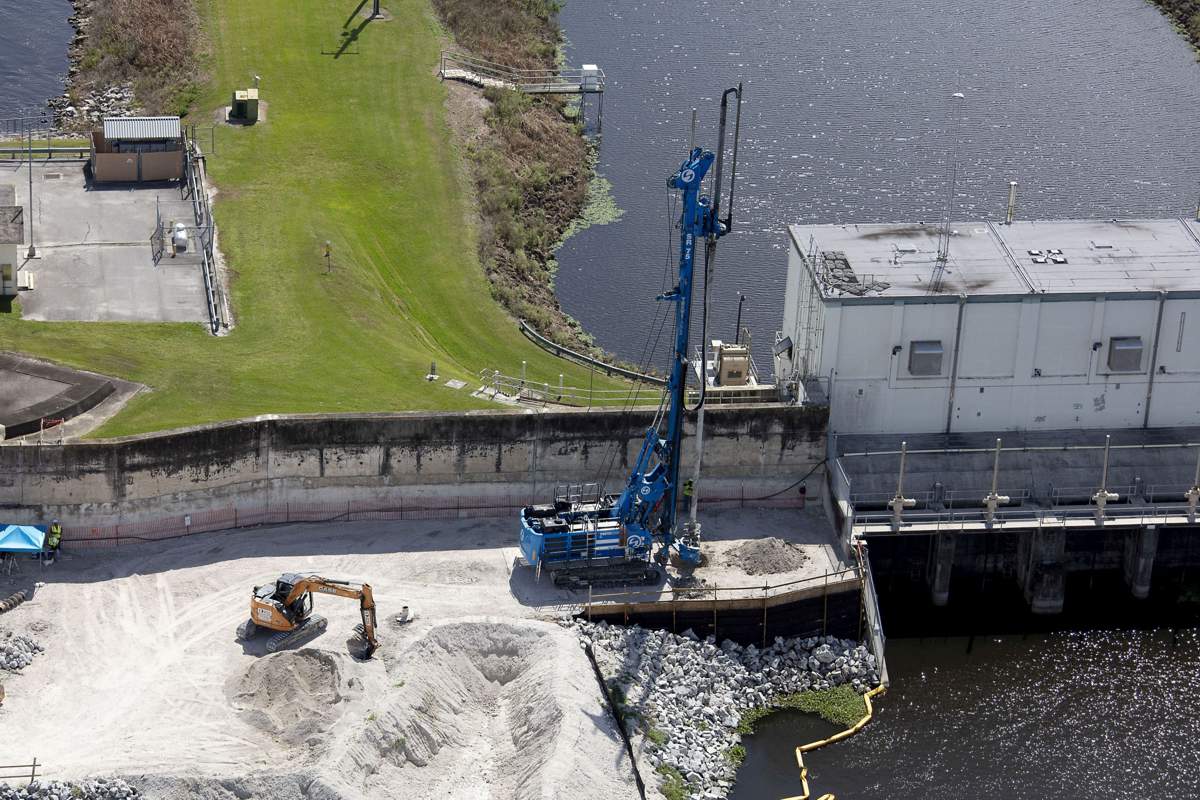 To meet the project requirements and ensure stability of the dike during the excavation, TREVIICOS pioneered the COW installation using Self-Hardening Slurry (SHS) by hydromill method. In this method, the slurry, an engineered mix of Portland cement, SLAG cement, bentonite, additives and water, act both as support of excavation and permanent backfill.

The excavation was generally performed by a combination of mechanical clamshell and a hydro-mill. The former would excavate the “softer” soil layers, while the latter, typically mounted on a SOILMEC SC120 heavy duty crane, would excavate the more competent ones and limestone layers (with unconfined compressive strength reaching 14, together with ensuring the verticality and continuity requisites for the cutoff wall were complied with.

The rehabilitation also required the installation of cutoff wall by jet grouting, to close the areas adjacent to existing concrete structures (gates, locks, etc.). TREVIICOS used a combination of pre-drilling and jet grouting techniques. The pre-drilling, typically done using a SOILMEC SR75 equipped with continuous auger, was used to fragment the hard limestone layers along the alignment of the cut-off wall, while the jet grouting was performed to create the required cutoff using a SOILMEC SR30 rig set-up mainly in mono-fluid jet grouting system.

All the projects also included additional scopes, such as: QC/QA program to verify the compliance with strict technical requirements; continuous environmental monitoring; slope protection during production; full site restoration upon completion of site activities; electronic data management; installation of an Automatic Data Acquisition System (ADAS) for the future real-time monitoring of groundwater levels underneath the dike.

All the seven task orders were successfully completed ahead of schedule and in full compliance with stringent safety and quality requirements, while working in full partnership with the US Army Corps of Engineers. 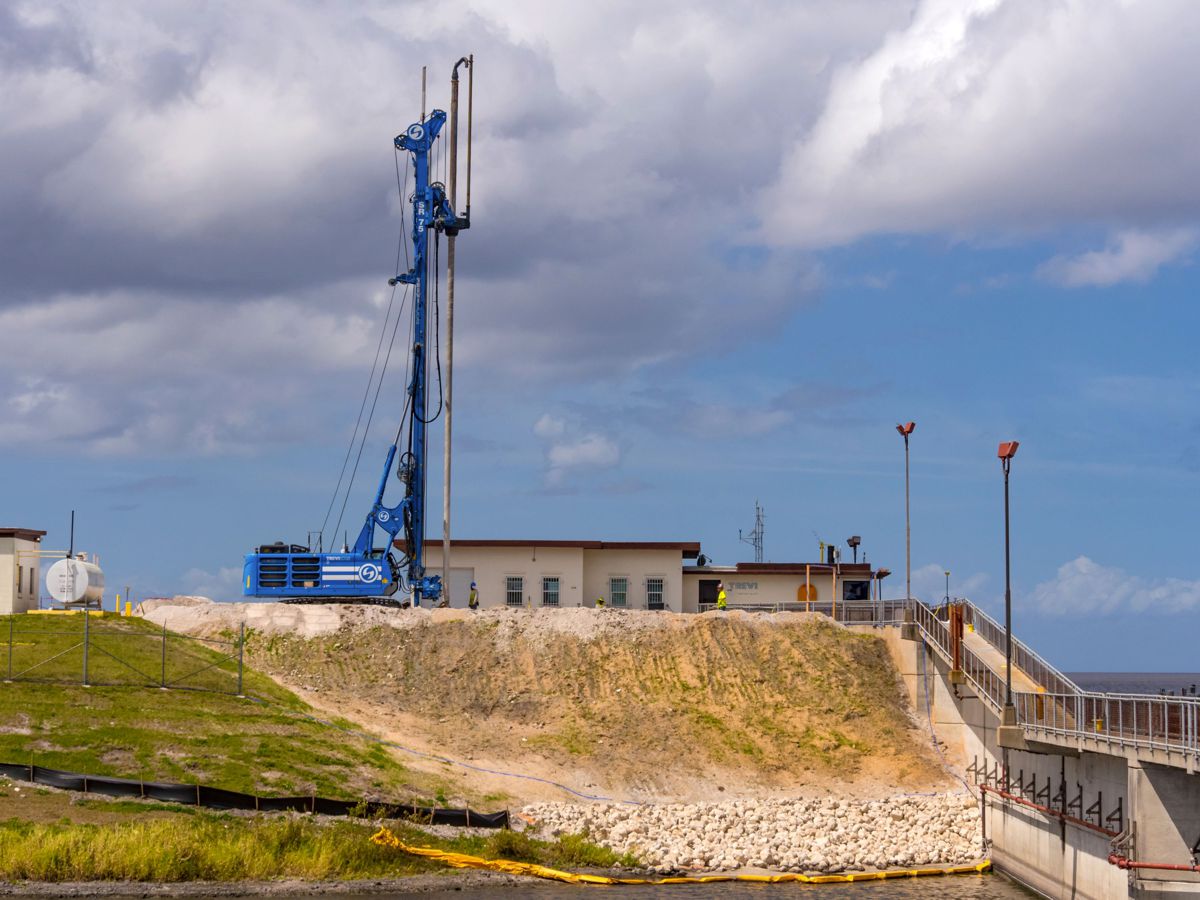 Since 2001, the US Army Corps of Engineers has made a significant investment, over $870 million, in projects designed to reduce the risk of catastrophic failure of the aging structure around Lake Okeechobee to help ensure the safety of south Florida residents.

Despite the above, local authorities have somehow suffered the impacts of these works, considered as a disruption of their activities and an occupation of their land.

In this context, further exacerbated by the COVID-19 pandemic in the most recent years, the Trevi Group was able to successfully carry out the most long-lasting and challenging project in its north American history.

A large part of this success shall be credited to all the local suppliers and service providers that have allowed the different Task Orders to keep on going even in the toughest times. 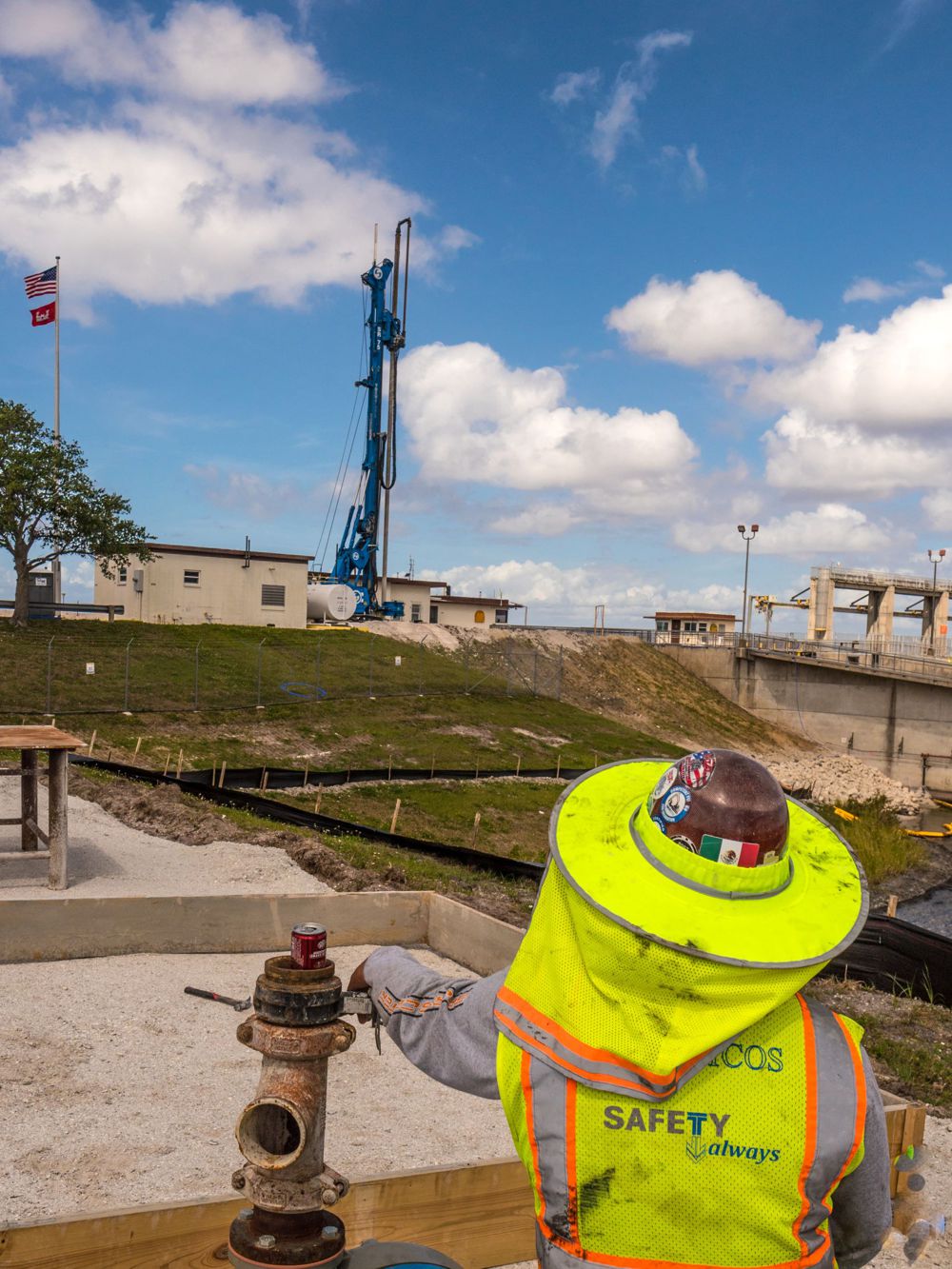