The Small Robot Company (SRC), a British agritech start-up for sustainable farming, today announced the launch of its latest Crowdcube equity crowdfunding campaign. The campaign seeks £700,000 to finance SRC’s non-chemical weed zapping robot Dick to field trials, and the manufacture of a fleet of Tom monitoring robots for its commercial weed mapping service. Investors can access the campaign here.

“Precision farming is a $10 billion opportunity. Agriculture is on the cusp of radical change. Precision, and not speed, will define the future of farming – and our technology is leading the charge,” comments Sam Watson-Jones, co-founder, Small Robot Company. “There is a huge amount of investment going into agritech at the moment, and Crowdcube opens this opportunity up for private investors. Almost a third of our previous £1.2 million successful crowdfunding raise was from farmers, demonstrating the readiness of this industry to embrace change.” 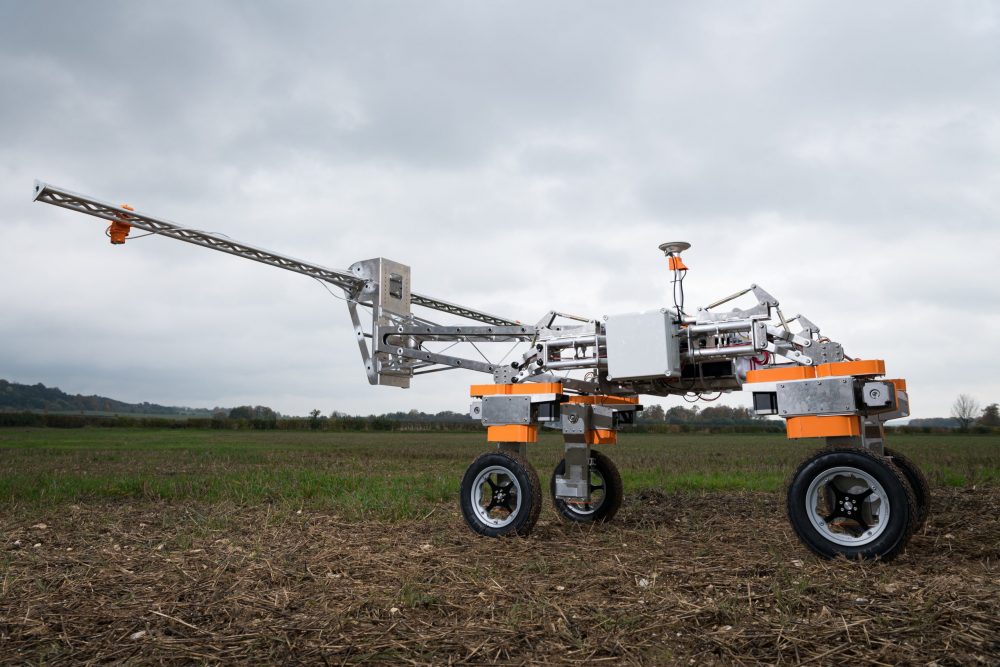 “Since our last raise, we have achieved our major delivery milestone of moving from proof of concept to commercially-ready prototype. This next raise will help us to begin manufacturing our robots, as well as delivering our weed zapping technology,” comments Ben Scott-Robinson, co-founder, Small Robot Company. “Today, we’re delivering an AI-generated field map which has the potential to show the exact location of every plant and all of the weeds on UK farms, and we’re the first to market with a product of this sort. This year we’ll kill these weeds autonomously without using chemicals. With pressure increasing from regulators and herbicide resistant weeds, this will be game-changing.”

Small Robot Company has secured more than £2.5 million in funding to date, including £1.2 million from its previous Crowdcube raise, and more than £1million in government Innovate UK grants. This includes an £800,000 grant for its ‘Wilma’ artificial intelligence weed recognition and ‘Tom’ weed mapping technology. This was one of the largest single agritech grants made under Innovate UK’s innovation scheme in 2018. 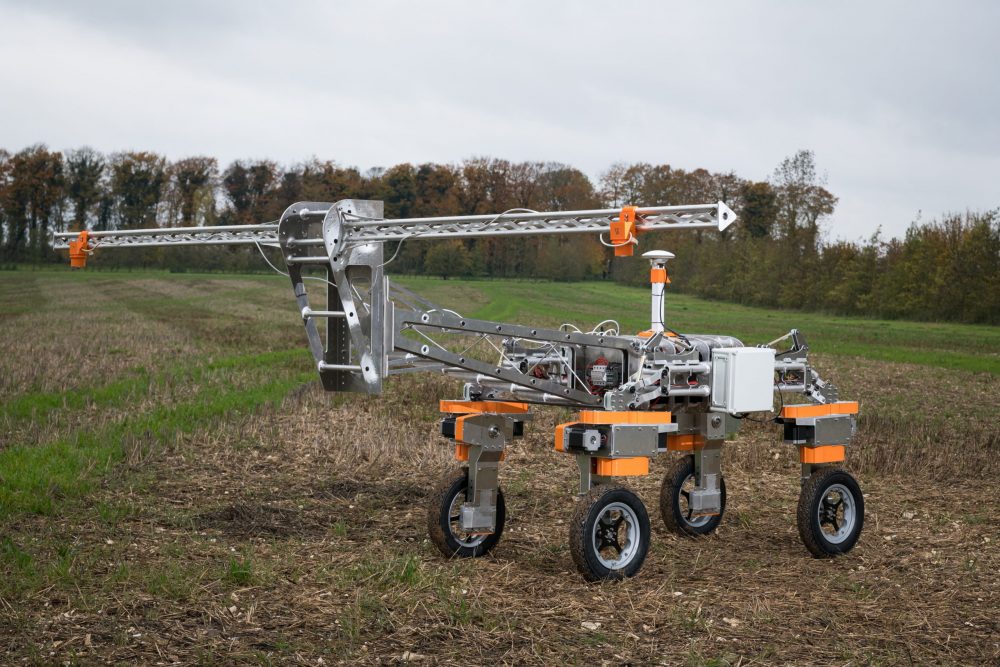 Rob Macklin, the National Trust’s head of farming and soils said: “Technology needs to play a big part in solving many of the issues we currently face in farming – particularly improving soil health and carbon sequestration, reducing our reliance on fossil fuel power and fertilisers and avoiding the adverse impacts of synthetic chemicals on the environment.

“As the country’s largest conservation charity, along with our 1,700 farm tenants and graziers we are one of the country’s biggest farmers. We want to encourage nature friendly farming practices – and we have to lead by example and embrace innovations. We have started small robot trials at Wimpole and intend to extend trials to other estates in the near future.” 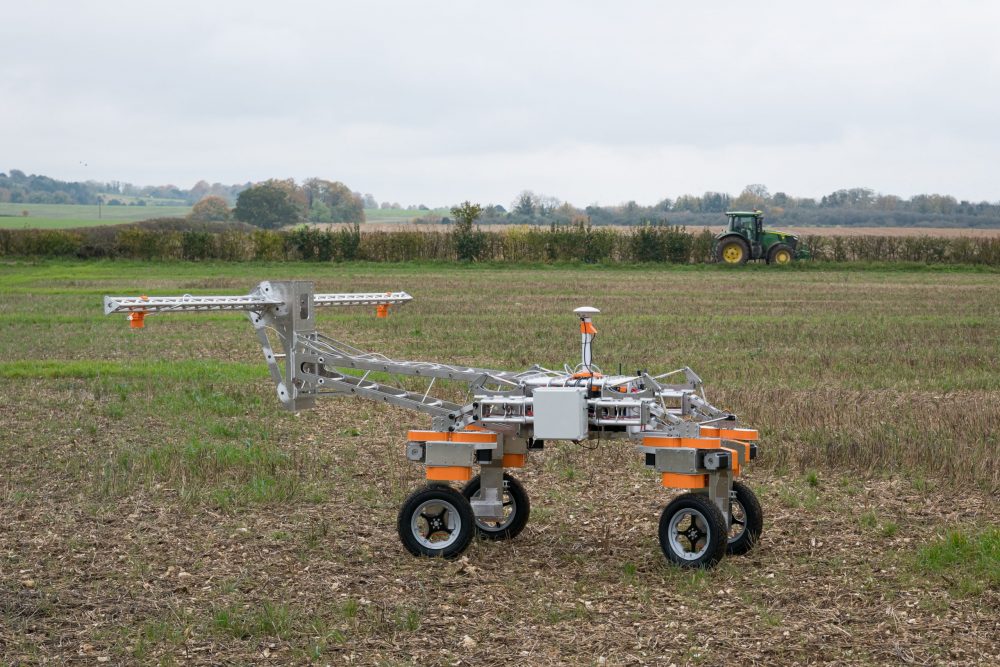 Small Robot Company is currently in field trials on 20 farms across the UK, working in conjunction with its trial farmers to develop its sustainable farming technology . Trial farms include the Waitrose Leckford Estate farm and the National Trust Wimpole Estate, who are both already trialling SRC’s first commercial weed mapping service, which uses SRC’s next generation ‘Tom’ monitoring robot to first locate the weeds. This is the world’s first service for individual plant mapping at broadacre scale.

Working together in partnership with British start up RootWave, Small Robot Company has successfully completed development of its ‘Dick’ non-chemical weeding robot prototype to in-lab proof of concept stage, Technology Readiness Level (TRL) 4.0. An initial prototype will go into field trials in 2020, with the commercial weed zapping service anticipated to be available from autumn 2021.

This is a major technological milestone which will enable automated, precision, per-plant weeding both at scale and autonomously, for the first time providing a post-glyphosate future for arable farmers. With up to 95% of chemicals wasted in the current farming system, this new non-chemical weeding technology will be significantly more nature-friendly and better for biodiversity.

SRC’s Wilma (its AI ‘nervous system’ and brains of the operation) is also now in use for commercial weed identification and decision support. Wilma can now detect both BLW and emerging wheat, following extensive training using tens of thousands of images from the last year’s data collection. Working with partner Cosmonio, work is now underway for identification of grass type weeds such as blackgrass, brome and ryegrass, the mapping of which is scheduled to follow next autumn.

Andrew Hoad, Partner & Head of Waitrose’s Leckford Estate, comments: “This technology could be truly groundbreaking and has the potential to shape how we farm in the future. By helping us be more precise and targeted in controlling weeds and managing pests, this next generation of farming robots could in turn help us protect biodiversity on our land and preserve the natural environment for future generations.”

“We are now on the cusp of a fourth agricultural revolution. Food production and environmental care is at the heart of that,” said investor Andrew Ward, MBE Farmers Weekly Farming Champion & Arable Farmer of the Year, and member of the Small Robot Company Farmer Advisory Group. “We can’t achieve this without robotics and automation becoming part of everyday farm life. Cost of production is rising at an alarming rate. Applying products to 100% of a field needs to change. My zero tolerance approach to blackgrass is working. The next stage is to use robotics to only apply herbicides to those plants which need them.”

“Farming is ripe for disruptive change. Over the next decade we must become more profitable, reverse environmental damage, communicate better with the public and grow more food, for more people than ever before,” comments investor Tom Clarke, Nature Friendly Farmer, NFU Sugar Board, OFC19 Emerging Leader and member of the Small Robot Company Farmer Advisory Group. “The ONLY way this is possible is with the sort of innovation developed by the Small Robot Company. It’s an approach which will completely revolutionise crop-growing, and I’m very proud to be a part of it.”

Callum Weir, farm manager of the 1,500 acre (600 hectare) organic farm on the Wimpole Estate, says: “The key advantage of this groundbreaking technology is that it will enable us to be much more precise and targeted in controlling weeds, therefore helping us to increase crop yields and biodiversity. It is also lightweight, helping reduce compaction of soils – a consequence of using traditional tractors – which will help improve soil health.”

“Like many arable farmers we would like to reduce the use of pesticides, encourage wildlife on our farm and improve soil health – while farming as efficiently as possible to maintain the viability of the farming business,” said investor Kate Brown, farmer, W R Brown (Farms) Ltd. “The Small Robot Company’s vision is to help farmers achieve all these aims which is why we are keen to work with them.”

“Non-chemical weeding is the holy grail. Farmers crop protection toolbox is under ever growing pressure. Legislation is leaving us increasingly short of options,” comments investor Tom Jewers, farmer and member of the Small Robot Company Farmer Advisory Group. “Fundamentally, the current farming system itself is also inherently inefficient. Meanwhile blackgrass has become a massive problem. We desperately need to develop ways to reduce the need for expensive plant protection products and artificial fertilisers. The ability to treat only the plants that actually need it is game-changing.”

“The time is now for Smart Farming. Every other industry has benefited from Digital,” said investor Will Evans, Farmer Rock and Roll Farming Podcast. “Technology is rapidly transforming food production – and Small Robot Company has the vision, drive and ambition to take this forward.”

Potential investors are reminded that their capital may be at risk.

0 0 0
Previous : On National Pothole Day TRL calls for engineers to solve the causes not just the symptoms
Next : Volvo Construction 90-tonne excavator is now available worldwide