The Kiel Canal is one of the world’s busiest artificial shipping lanes and connects the North Sea with the Baltic Sea over a distance of almost 100 km. The Brunsbüttel lock system forms the western entrance to the canal and now includes a fifth lock chamber.

In Brunsbüttel, two double-chamber locks overcome the difference in water level between the Elbe and the Baltic Sea, consisting of the Small Double Lock of 1895 and the Large Lock of 1914.

In order to enable the booming shipping industry on the Kiel Canal to operate smoothly during the several years of repairs, the Federal Ministry of Transport and Digital Infrastructure (BMVI) approved the construction of a further – fifth – lock chamber.

The entire construction project includes the construction of a 360 m long sea lock between the Elbe and the Kiel Canal and the conversion of the entrance to the Elbe-side outer harbour. The new 5th lock chamber will have the dimensions of 360 x 45 m and a depth of up to 16 m. A large part of the work consists of excavation for the chamber and the redesign of the outer harbour, which consists of three excavation pits.

In December 2015, Martens en Van Oord was awarded the contract for the earthworks, dredging, coastal and bank protection work for the construction of a fifth lock chamber at Brunsbüttel in Germany. The contract also covered the transport and processing of all soil excavated during the work. About 1.7 million m³. The client and party with final responsibility for the construction is a consortium of three BAM operating companies.

To keep the structure stable, a bracing frame was subsequently installed between the walls and the cofferdam was pumped full of water. Martens en Van Oord could then continue with the wet excavation up to a depth of 26.5 metres below water level. A SENNEBOGEN 6100 E duty cycle crane will be used to excavate and remove soil to a depth of 26 m using hydraulic clamshell grab. 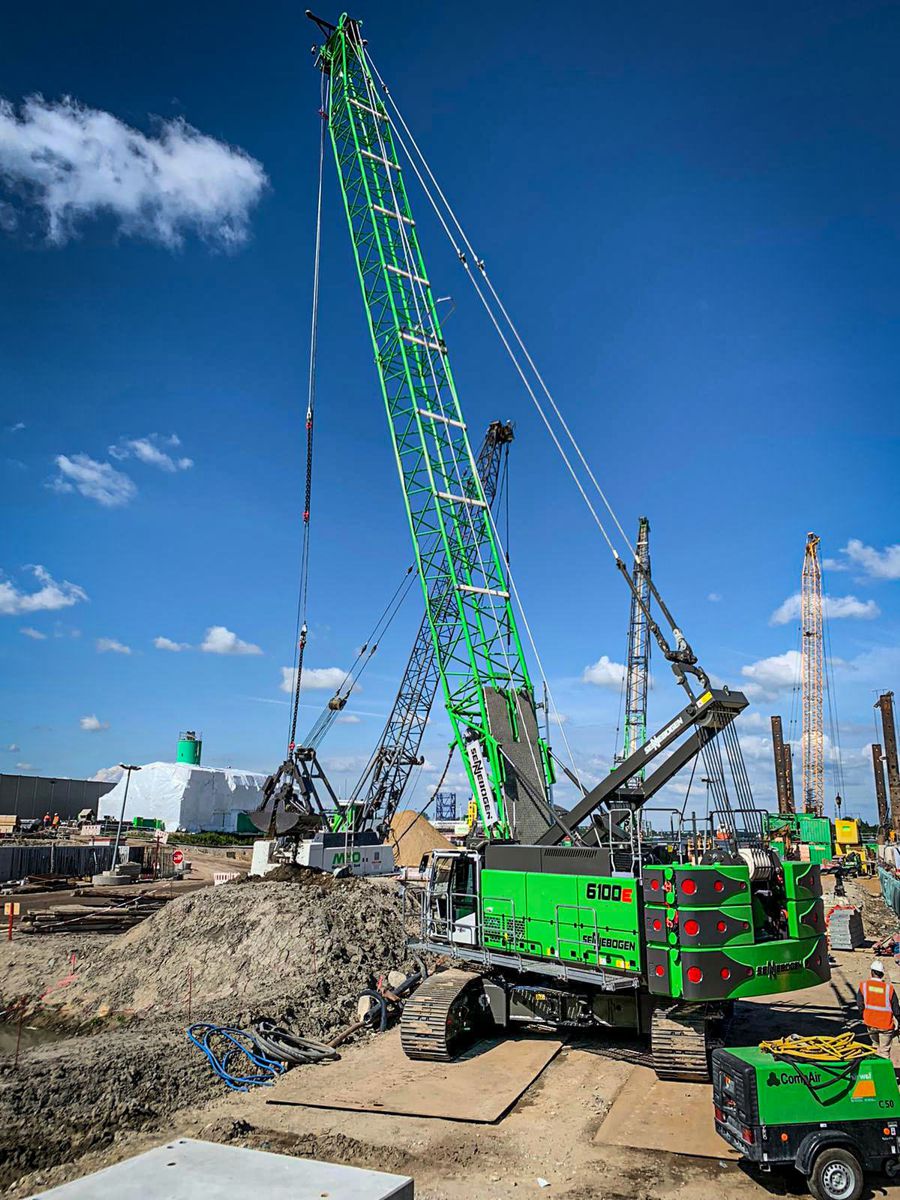 The new SENNEBOGEN 6100 E, as an E-series duty cycle crane, was designed especially for demanding, dynamic applications. The 100 tonne duty cycle crane is particularly suitable for special civil engineering applications with its robust design, powerful multi-circuit hydraulic system and powerful rotary drive. Operation with a rope grab for material handling work is just one of many equipment variants, as the SENNEBOGEN 6100 E can be individually configured according to customer requirements.

The 6100 E used here was delivered by sales and service partner Van den Heuvel Cranes & Services B.V. is equipped with a 41.1 m long lattice boom. The machine is driven by a 451 kW (stage V) diesel engine and has two 275 kN free-fall winches. The winch freewheel is fitted as standard on the rear winch for optimum grab filling during handling operations. The SENNEBOGEN 6100 E has been equipped with a stronger 3-row slewing ring and two slewing gears to cope with dynamic loads. 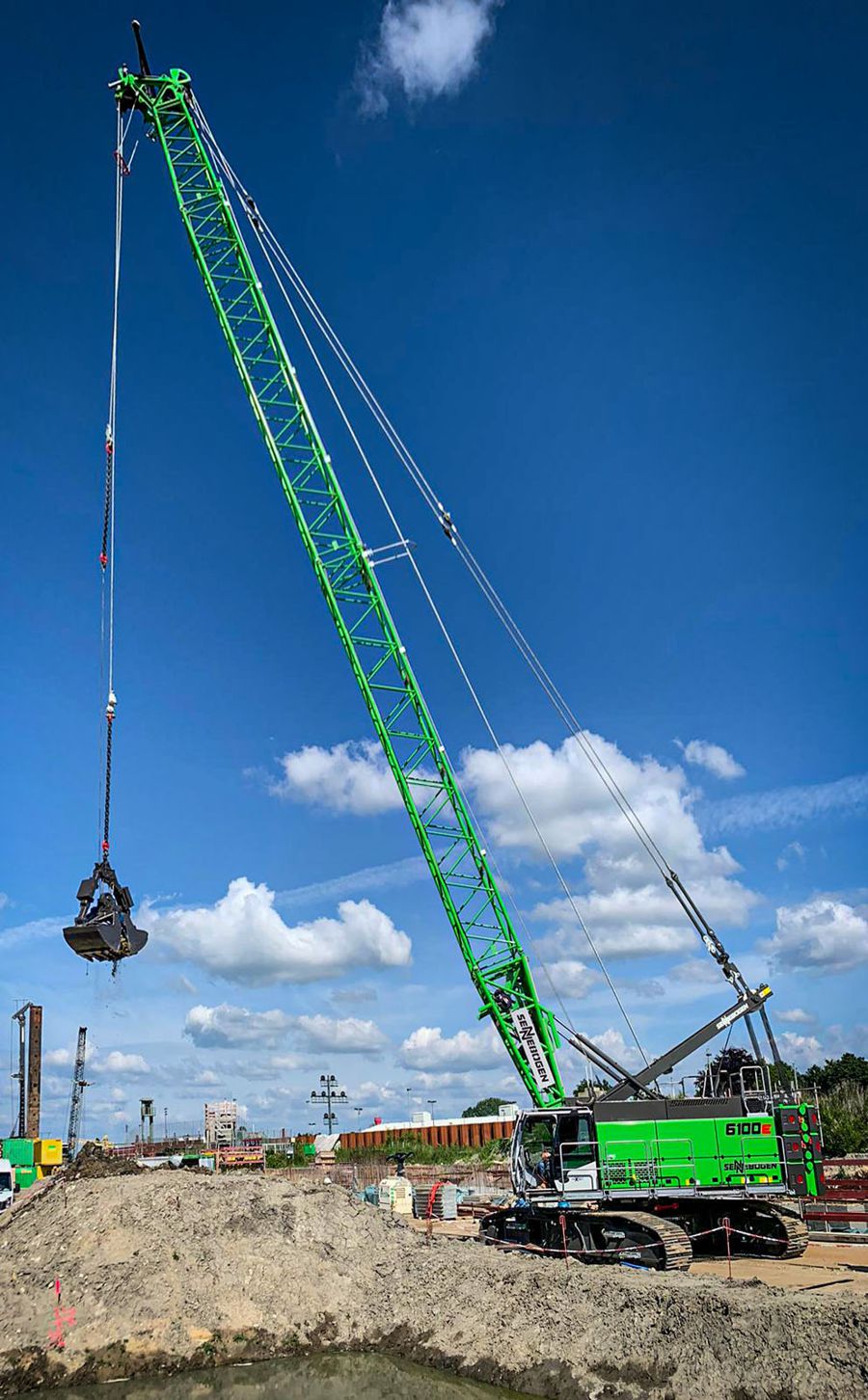 After completion of this part of the jobsite in Brunsbüttel, the 6100E will be equipped with an additional package for increasing the load capacity: instead of 28 t, 35 t ballast is on the upper carriage and 17 t on the lower carriage, naturally with a corresponding extension of the overload protection program.

A fully hydraulic 30 kN tagline winch  will prevent the grab from swinging and oscillating – for even faster and more precise grab positioning. Finally, the duty cycle crane is equipped with a modern additional hydraulic system for the operation of nine different attachments. Depending on requirements, predefined pressures and volume flows can be called up, which can be adjusted to customer requirements using the integrated control system. 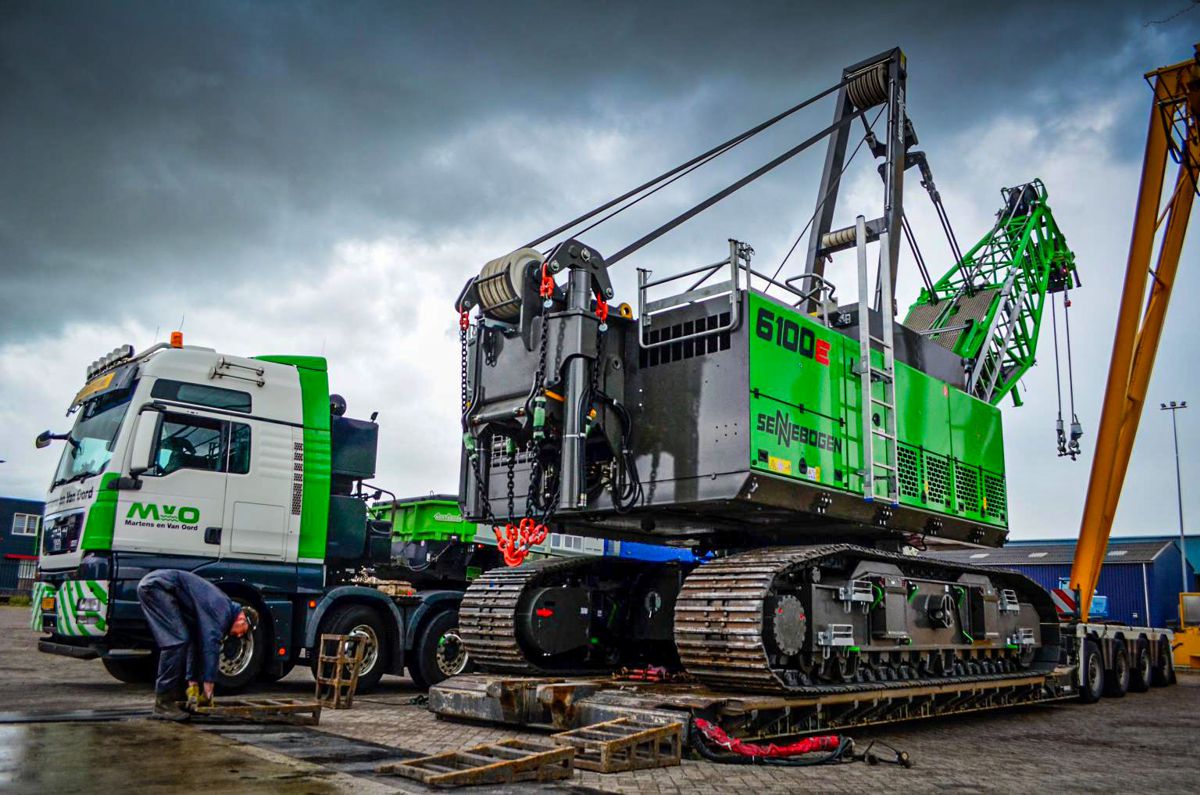 Extraordinary depth of the excavation pits

Special challenges of the project are the extraordinary depth of the excavation pits, which are up to 26.5 m below water level. In addition, there is considerable time pressure. The 6100 E meets these challenges with flexibility and reliability.

For example, the undercarriage can be retracted to 3.5 m and the transport weight reduced to less than 41 t. The duty cycle crane can assemble itself without an auxiliary crane, and the same applies to the self-assembly system for the ballast: The 6100 E can pick up and set down its own ballast.

After successful pilot test run, the 5th lock chamber can probably be opened for shipping at the end of 2026. After that, the existing large lock chambers can be rehabilitated. We wish all parties involved continued success for this giant project!

0 0 0
Previous : 5 questions you need to ask before investing in a CCTV security system
Next : Doka formwork and modern bridge-building techniques used on US 181 Harbor Bridge