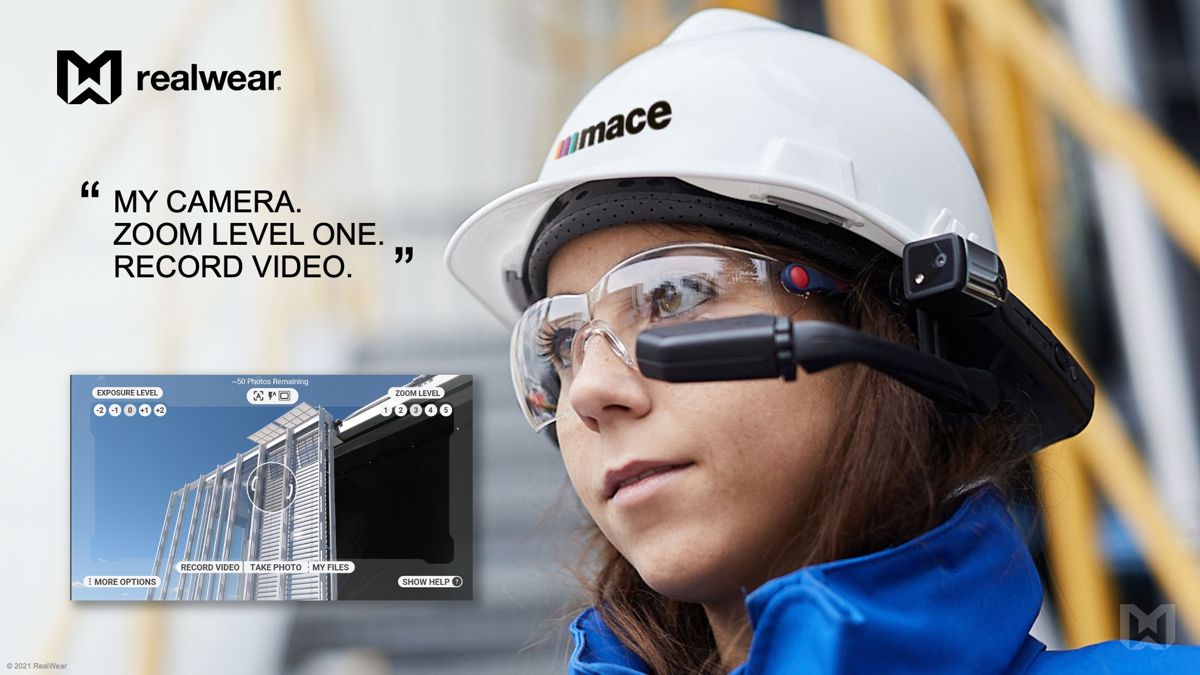 Throughout this global pandemic, the voice-activated RealWear HMT-1 wearable device has enabled hundreds of its workers and clients to mitigate the spread of COVID-19 and reduce its carbon footprint via using the device for remote inspections during the construction process. The wearable deployment marks a first for the construction industry.

Mace works on a number of construction projects both in the UK and across the globe. When the pandemic hit and travel restrictions came into effect, Mace envisioned an entirely new and safer way to inspect building façades. To operate as effectively and as safely as possible under seemingly indefinite social distancing restrictions, it needed a solution that would enable inspection work to still be carried out but with minimal people onsite than normally permitted.

RealWear’s assisted reality head-mounted wearable computers require only a single site inspector to be physically present, while multiple others ‘view’ the site clearly and remotely from their own location, via a feed that streams from the innovative headset directly to the viewer’s handheld or laptop computer. The technology negates the need to physically travel to a site, while also delivering on Mace’s requirement for its workforce to be fully connected through remote collaboration.

Furthermore, the deployment has banished the logistical and planning complexities of trying to coordinate the diaries of several site inspectors to be present at the same time on the same day. Since the completion of the deployment this month Mace has been able to reduce in-person site visits, and its Façade team has seen a 75% reduction in travel; not only has this resulted in a reduction in carbon emissions, but the time saved has freed up staff to be more productive during the course of their day.

“With its willingness to embrace the future, it’s appropriate that Mace is at the head of the curve within the construction industry with respect to deploying wearable technology,” commented Phil Sedge, Head of Facade, Mace Group. “Since the deployment, we have seen improvements in the decision-making process, and we’re able to share real-time information instantaneously. The technology has enabled us to reduce the number of staff travelling to site, without any compromises to the quality of our work. The time saving and environmental benefits deliver further advantages.” He added: “RealWear’s reinvestment back into product development has also impressed us, which means that the foundations of this technology are future proofed. We only wish we had deployed it sooner.”

Following an in-depth consultation with RealWear partner, SystemActive, which involved various demos via video conference, Mace selected RealWear’s purpose built, voice enabled HMT-1 over other solutions available in the market, including smart glasses. The RealWear headsets met Mace’s requirements for no compromises on safety, for hands-free operation and the ability to clip to the side of hard hats. Its other requirements included durability and functionality at the right price point, two other areas where RealWear excelled.

The deployment began in June 2020. SystemActive worked with Mace’s IT team to create a bespoke operating system for the HMT-1, which was tailored so that many of its out-of-the-box features could only be used for collaborating with clients and colleagues who were not physically present on site. Once the operating system was set up, the wearable headsets arrived on site and were ready to use. Training from both RealWear and SystemActive included on-boarding sessions to bring Mace’s personnel up to speed on how to log on to video conferencing and join meetings, and a walkthrough of the functions of the camera and video stream.

“From a health and safety, durability and price perspective, RealWear’s device ticked a lot of boxes. We worked with the senior teams at Mace to ensure the device was as easy as possible for everyone to use and that the bespoke operating system met Mace’s needs. We’re thrilled with the positive feedback from Mace on the deployment and look forward to working with the team in a continued rollout,” added Ross Riley, Head of Immersive, SystemActive.

“RealWear’s HMT-1 is purpose built for productivity, even in extreme environments due to its ruggedness, durability and functionality,” said Jon Arnold, VP of Sales, RealWear Inc. “With software updates to come in March that will further improve the user experience, the HMT-1 is set to be a central part of Mace’s workflow, both now and in the future,” he added.

Based on this level of success, Mace plans to surpass the 150-unit mark over the next few months as it ramps up deployment of RealWear’s HMT-1 globally. The company has recently procured more units to go out to one of its sectors in Peru to help with monitoring of a project and its various phases, including safety inspections. It has also increased awareness through its supply chain who have started to adopt the technology.