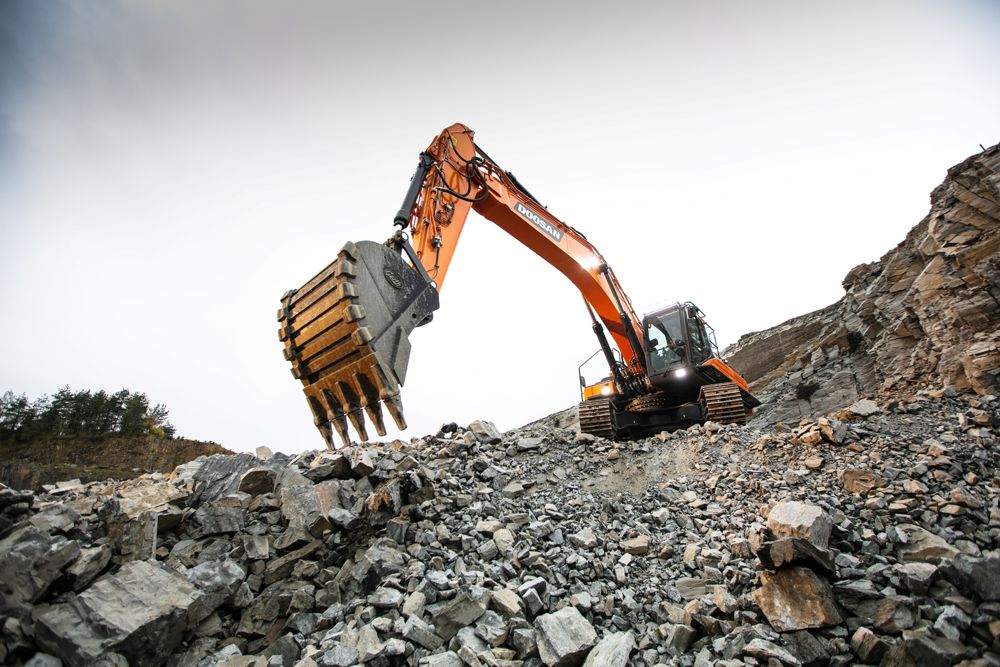 A new Doosan DX350LC-7 Stage V compliant excavator has added increased power and fuel efficiency for working with heavy blocks of granite at the Ruprechtice quarry in the Czech Republic.

The Ruprechtice quarry is one of several northern Bohemia quarries owned and operated by LIGRANIT a.s., using state-of-the-art equipment like the DX350LC-7 in tough conditions. The new DX350LC-7 excavator was supplied by GARNEA a.s., the Authorised Dealer for the Doosan range in the Czech Republic.

The Ruprechtice quarry in Liberec dates back to 1910. Over the years, it has been owned by the famous stonemason, Josef Lange, and by the Liebig family. It subsequently became the property of the state until 1992, when it was acquired by private company, LIGRANIT. The quarry specializes in the extraction and sale of much sought after Czech granites, that architects both at home and abroad regularly specify in their designs and for use by sculptors.

“Over the last 10 years, quarrying has changed in terms of processing granite blocks. Previously, everything was done by hand. Today it is mainly carried out with the latest machinery and technology,” says Radek Svoboda, Production Manager at LIGRANIT. 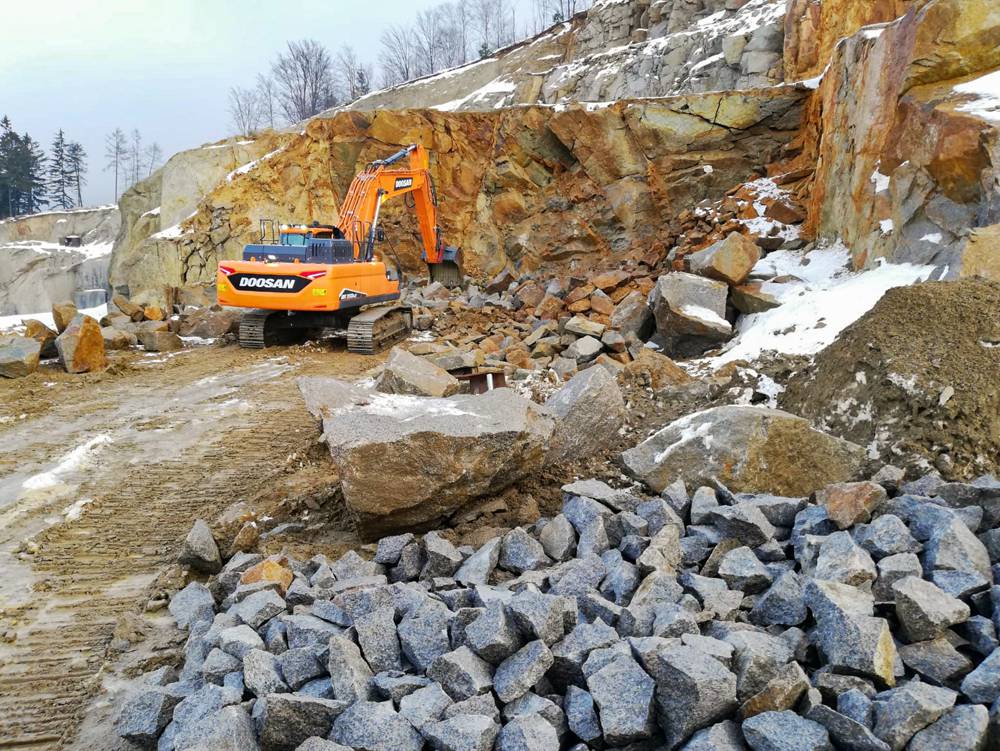 According to LIGRANIT, the processing of granite blocks requires machines that are both powerful and efficient. It is precisely these requirements that have been met by the new Doosan DX350LC-7 excavator from GARNEA. The key selection parameters included an emphasis on exceptional performance, low fuel consumption, operator comfort and, last but not least, environmental friendliness.

“We purchased the new Doosan machine for its power and low fuel consumption. Of course, the length of the warranties and the service from GARNEA are also important factors,” explains Radek Svoboda.

As well as exceeding the parameters set by LIGRANIT, another aspect supporting the purchase of the DX350LC-7 was the excellent service record of a smaller Doosan DX140LC-5 excavator owned by LIGRANIT. The Stage V compliance of the new DX350LC-7 also met the environmental standards required by LIGRANIT. But the most important factor was the excellent relationship with GARNEA. “We negotiated with the management of GARNEA and everything that was promised with the new DX350LC-7 has turned out exactly as they said,” adds Radek Svoboda.

The warranty protection on the DX350LC-7 model is 3 years/5,000 hours as standard, but thanks to the long-term relationship between the two companies, GARNEA has agreed to an extended   warranty cover of 5 years/10,000 hours. 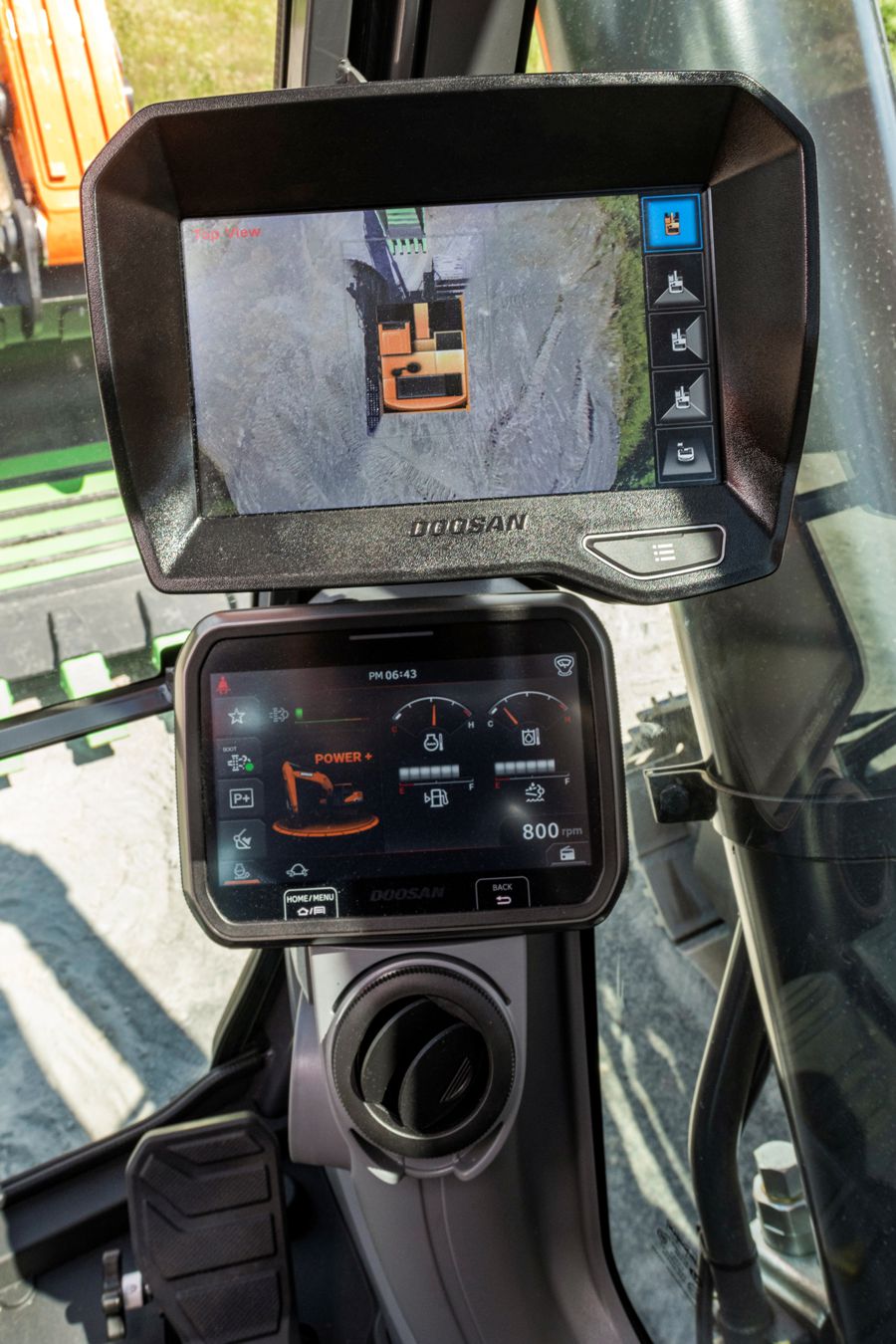 Excavators in the Ruprechtice quarry are brought into play after blasting work has finished, whereby small controlled amounts of explosive are carefully placed to obtain the necessary amount of stone. After blasting, stone blocks weighing from 100 to 3,000 kg are selected. The larger pieces of stone are reduced in size using the excavator equipped with a hydraulic breaker. Care is taken to ensure that the material obtained is of the highest quality.

Using an excavator, the blocks are moved and further divided using a splitter. For more precise work, splitting is done manually. Where the potential for material quality is best, entire blocks are transported out of the quarry and worked on with a saw. “These blocks weigh between 5 and 15 tonne, so the power of the machine is therefore a big plus for us,” adds Radek Svoboda.

Less Burden on the Environment Thanks to New Generation Doosan Engine

The DL08 engine offers a new solution to exceed Stage V regulations without exhaust gas recirculation (EGR), that boosts the quantity of air available during combustion, increasing the temperature of the process and greatly reducing the amount of particulates produced. This is combined with super-efficient DOC/DPF+SCR after-treatment technology to ensure minimal emissions.

Thanks to the new technology, maintenance of the diesel particulate filter (DPF) has been greatly reduced, with no maintenance required until the machine has operated for 8,000 hours.

With the DX350LC-7, Doosan has tried to ensure that productivity and environment protection are truly compatible. The enhanced fuel efficiency of the DL08 engine in combination with a new hydraulic main valve and the new generation SPC3 Smart Power Controls, provides overall fuel efficiency increases of +10% in the S mode and +6% in the P+ mode compared to the previous generation machine.