The powerful machine, the biggest machine in the company’s stable, is the ideal tool for tough demolition jobs. The company has also fitted a 28-metre reach bespoke boom to the machine for specialist demolition work.

The mighty HX520L was put straight to work on a project to demolish the main building of the Kullaa College of Forestry in Ulvila, Finland.  Following a few weeks of ongoing demolition work, the building fell without a fight.  The old building was demolished to make way for the construction of a new one, as it is more cost-effective to replace the old with the new. 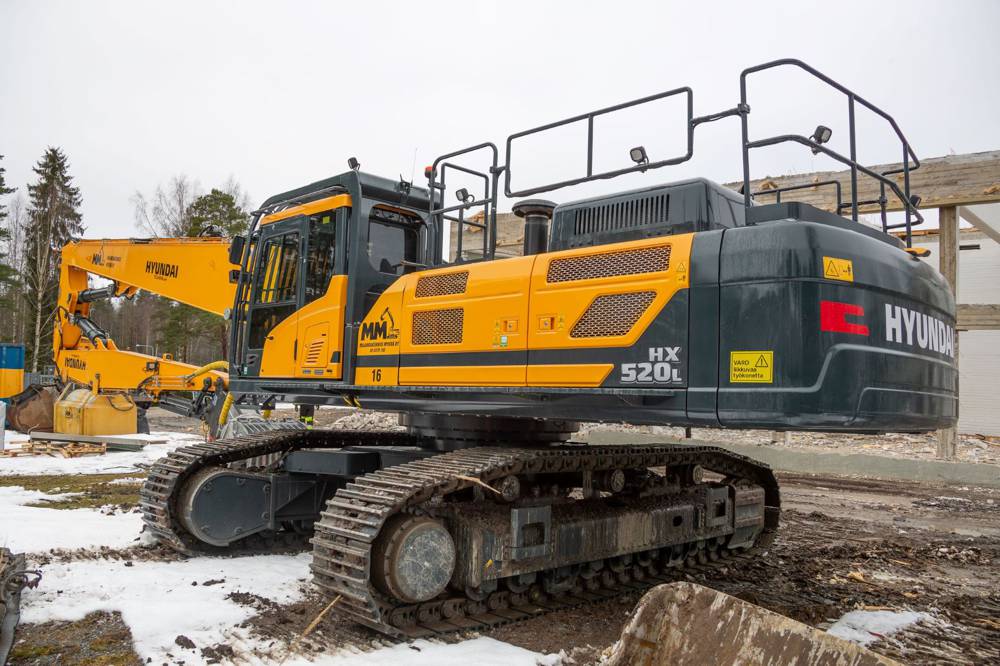 The company is loyal to the Hyundai brand and has been for a considerable amount of time. A comprehensive cross-section of Hyundai’s were also on the site in Ulvila assisting with the demolition project.

Maanrakennus Mykrä Oy has been carrying out demolition work since the mid-1990’s –when the already established company – purchased demolition equipment for the first time. CEO of Sales, Juha Mykrä, said “25 years after purchasing our first demolition machine, we have bought our first excavator with a high-reach demolition boom.  The comprehensively equipped demolition machine brings many welcome changes to the way we work.”

Mr Mykrä added, “Previously, we used an ordinary long-boom machine for high-work demolition, and we extended the machine’s reach by ‘piling up slopes’. This procedure is now a thing of the past thanks to the new Hyundai HX520L and its high-reaching demolition equipment. However, the design with its modular boom joint, makes it possible to swap to the traditional Hyundai boom onsite quickly – making it a very versatile machine.”

The Hyundai HX520L’s high-reach boom was supplied by Ipswich-based Kocurek Excavators Ltd, a specialist in the supply of bespoke excavator equipment and machine modifications. Kocurek is particularly renowned for modifications to demolition and materials handling machines. 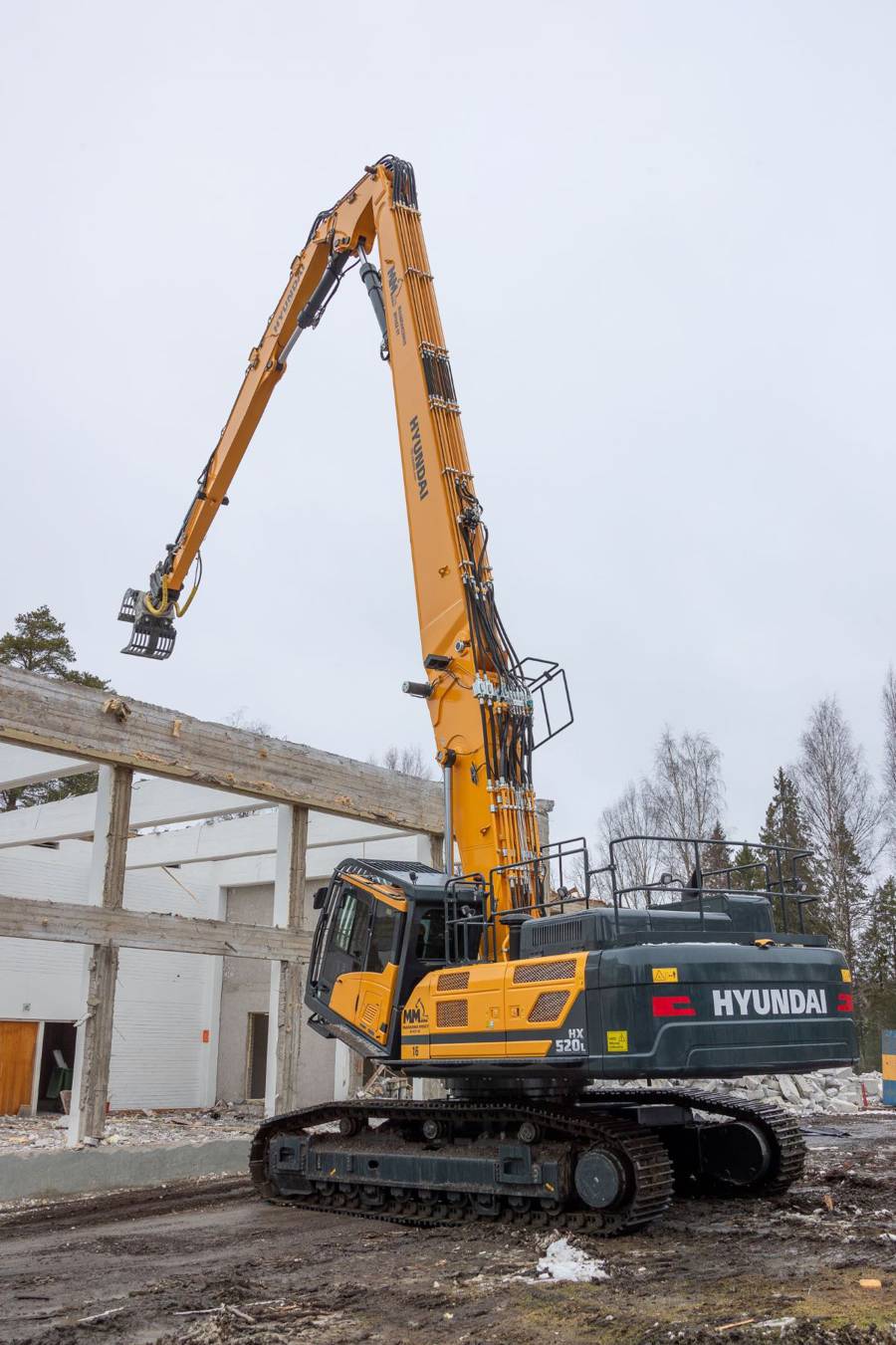 The new machine will be taking on other tasks, in addition to its demolition work, and the company specified other modifications to the machine to carry out its duties successfully, which included a Kocurek modified ‘tilting’ cabin which is ‘demolition site safe’, complete with automatic air conditioning and a heated air seat for the comfort of the operator.

The machine also has an eight-tonne counterweight at the rear with an extendible undercarriage, which adds stability to the excavator.  Hyundai’s 360-degree AAVM (Advanced Around View Monitoring) safety system is also installed, with cameras located not only at the rear of the machine but also on the boom.  The company also specified an on-board dust suppression system, which the company view as necessary in a demolition environment.

A Daemo sorting grapple, DMR800, is also fitted to the machine. The machine’s basic operating weight is 52 tonnes, however, with all the added extra equipment, it is 65 tonnes. The HX520L is powered by a Scania DC13 084A, 6-cylinder, 12.7-litre, Stage IV engine. 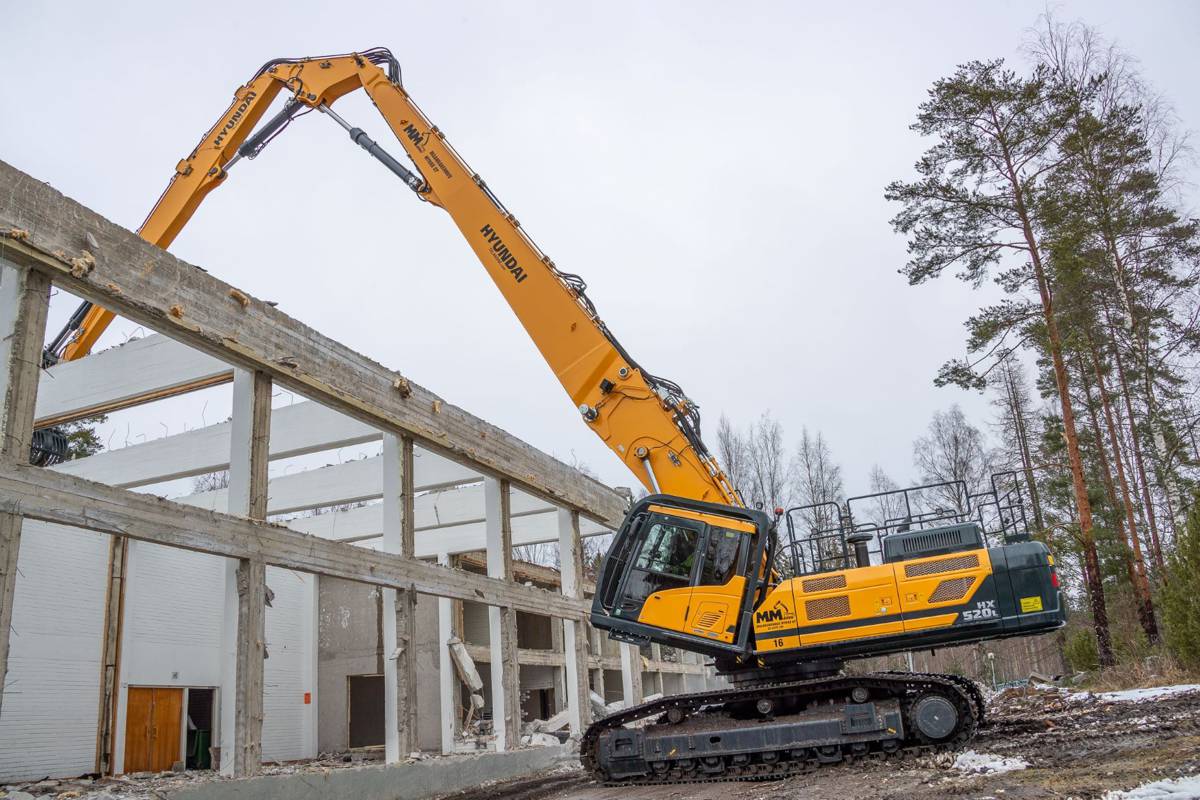 “The new machine has already proved its worth on its first job.” Reported Mr Mykrä. He added, “The Hyundai is able to carry out effective and safe demolition – for example – chimneys can  be demolished more easily now, and this machine does not need to be operated as close to, or almost under the demolition project, as was the case before we purchased this high-reach excavator.”

“We had several demolition jobs in a queue specifically for this model – and we have more in the pipeline. Purchasing this new machine, specifying the extra safety features from Hyundai and the high-reach boom from Kocurek has improved our business capabilities and work capacity.” Concluded Mr Mykrä.