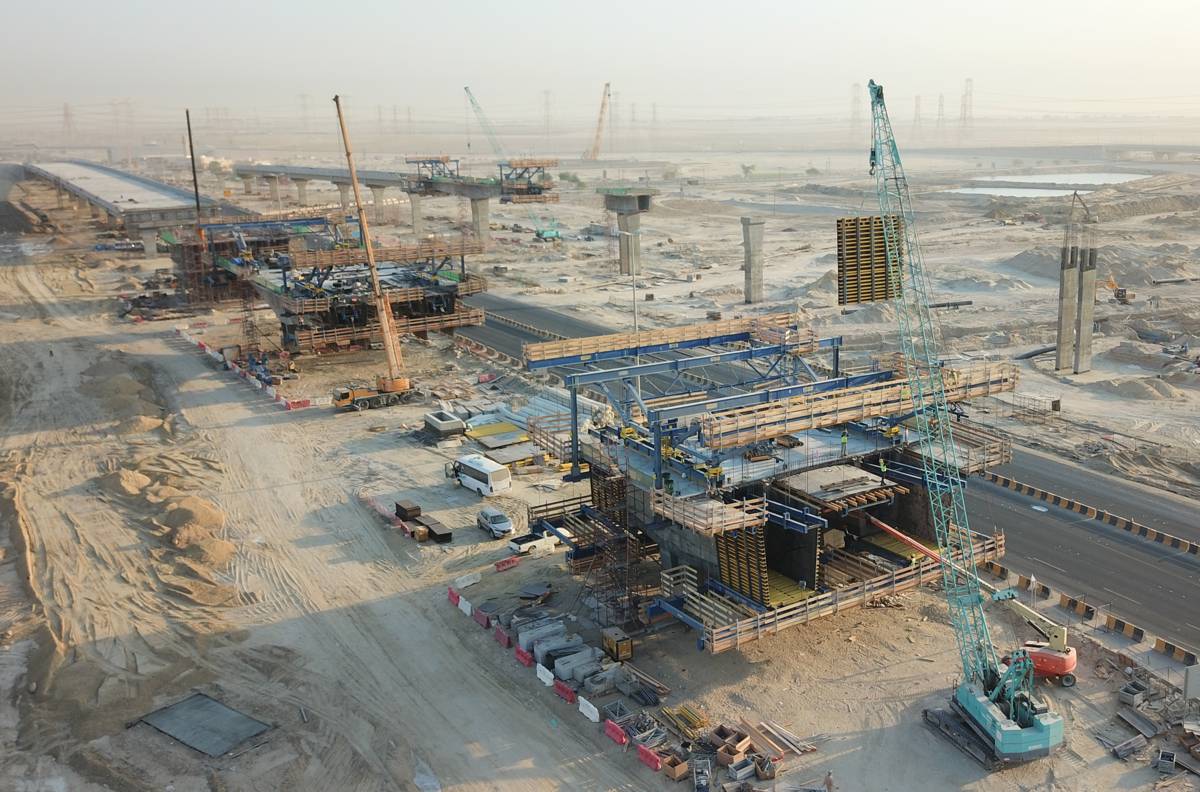 The Nawaseeb Road in Kuwait forms an important part of the country’s national infrastructure, providing a strategic, logistical corridor to neighbouring Saudi Arabia.

In delivering a solution for the highway bridge section, Doka has helped provide Kuwait with a landmark achievement; its first, in-situ cantilever bridge. As a full-service provider, Doka supplied an all-in-one solution, which included 3D planning, Cantilever Forming Travellers (CFT), and formwork instructors’ support to ensure a smooth, fast and cost-effective process.

Section RA217 of Nawaseeb Road, also known as Route 40, is one of Kuwait’s most important infrastructure and transport projects and is part of the Kuwait Development Plan 2015-2020. Covering a stretch of 37 kilometres, the development includes the reconstruction and expansion of the highway into a six-lane dual carriageway (three in each direction) with nine interchanges and three bridges, with the ultimate aim of improving access and safety on the roads by eliminating U-Turns and replacing them with roundabouts at all interchanges.

As a unique challenge to the project, Doka was required to find a casting solution for the two main bridges, including pier-to-pier spans, which at their longest measured 110 metres each and a total combined length of 940 metres, as well as one ramp bridge with a maximum span of 95 metres between piers and measuring 893 metres in length. In doing so, 300, up to 250-ton casting sections were required to deliver the project successfully.

Planning, formwork systems and formwork instructors from one source

By combining Doka’s expertise in planning, practical engineering and delivery, Doka used its internal, digital planning tools to design the right solution for the project, which included detailed designs that helped accelerate the planning process, while providing the client with an overall visual representation of the project.

In addition, a 3D model was developed with DokaCAD for Revit to give more precise visualisation of the CFT system.

In total, six Doka Cantilever Forming Travellers, supplemented with approximately 2,000 m² of Large-area formwork Top 50 were used on both the main bridges and ramp bridge at interchange five. In total, approximately 825 tons of Doka material was used during this process.

Using Doka’s Cantilever Forming Traveller, the client was reassured by its high-performance precision and how its modular components enabled it to adapt flexibly and quickly to the bridges’ varying geometrics.

Thanks to the system’s ergonomics and a small number of separate parts, the construction process was optimised, meaning a shorter construction schedule to reduce cost.

Speaking on behalf of the Arab Contractors Mohamed Dackrory, Deputy Executive Manager said, “In using Doka’s Cantilever Forming Traveller solution, the project benefited from having an all-in-one solution that was easy for our site teams to use while remaining flexible in terms of versatility for the project’s varying challenges. Given the complexities of this project, we were reassured by Doka’s extensive experience and expertise in bridge construction and were very satisfied with our partnership”.

Adjustments made easy with hydraulic cylinder

Due to the limited space available on-site, hydraulic cylinders were used to strip the inner wall formwork. As the bridge deck geometry was required to be reduced at every casting step as part of the agreed planning process, the formwork and components of the CFT had to be continuously adjusted. Various hydraulic cylinders and other integrated functions allowed for an easy adjustment process without using chain hoists or additional workforce.

The Cantilever Forming Traveller uses special slide bearings to allow safe and controllable shunting while preventing unwanted movement along its longitudinal gradients. Thanks to this feature, the construction team’s safety was ensured in every phase of the project through fully-enclosed working platforms and an integrated ladder system at all levels.

Besides the Cantilever Forming Travellers, Doka also provided the formwork for the pier heads which measured up to 20m in height, 12m in length and was erected onto Load-bearing towers d3 with Large-area formwork Top 50.

Due to the restrictions of existing gas pipelines, the piers’ location was predefined, resulting in different spans that led to an inbalance in construction delivery.

To support the bridge deck during this phase, Doka UniKit towers were used to safely transfer up to a maximum force of 3,800 kN to restore balance to the process and ensure the safe delivery of the piers.

Doka Formwork Instructors supported on-site delivery by ensuring that the formwork was used effectively and that the operations ran smoothly from start to finish.