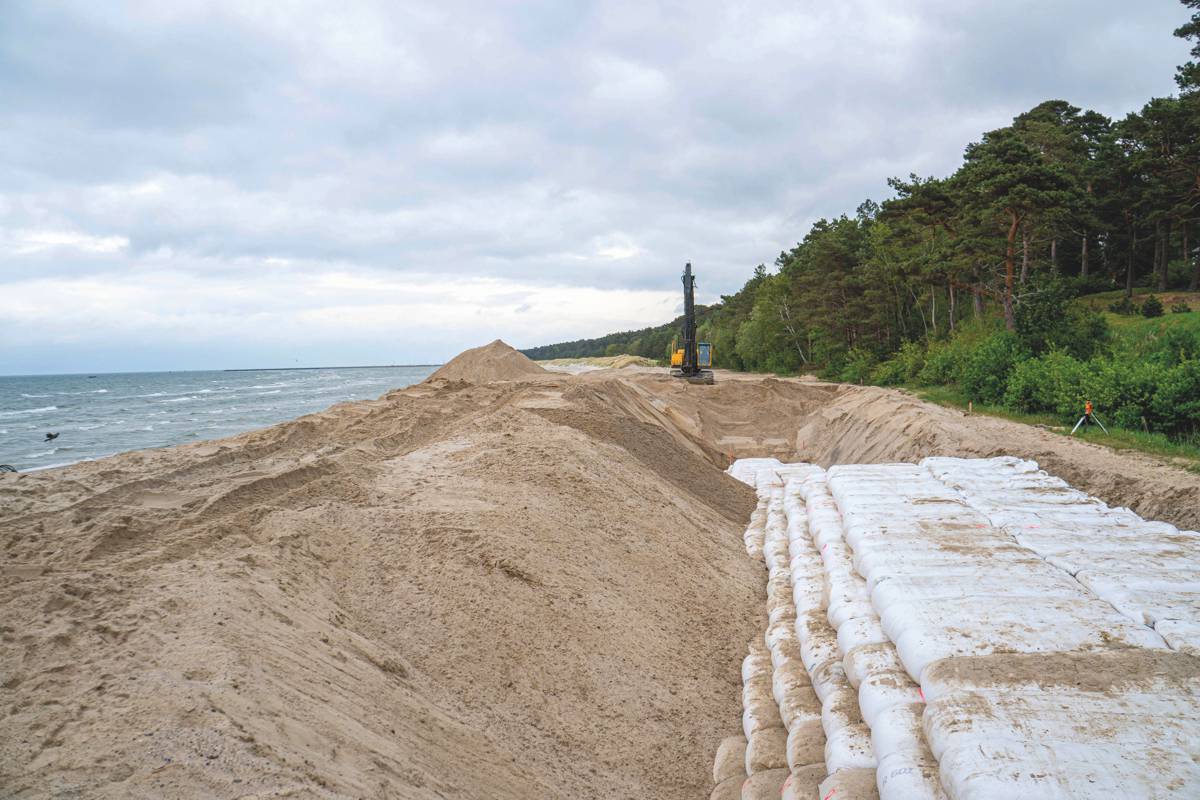 Storm surges are becoming more frequent. The coast in the seaside resort of Lubmin was exposed to several storm surges in a short time. In case of an additional storm surge, the existing coastal protection dune was in danger of breaking. A geotextile wall made of Secutex® Soft Rock sand containers gave the residents security again.

In 2017 and 2019, a total of three storm surges hit the coast of Lubmin. As a result of the storm surges, the coastal protection dune was severely affected by erosion. The sand dune is also not designed according to its intended cross-section due to the limited space. An additional construction had to be created as the last barrier against a breakthrough in the event of another storm surge and the imminent complete erosion of the dune. This barrier, which must remain stable in the event of a storm surge, was built with Secutex® Soft Rock from NAUE. 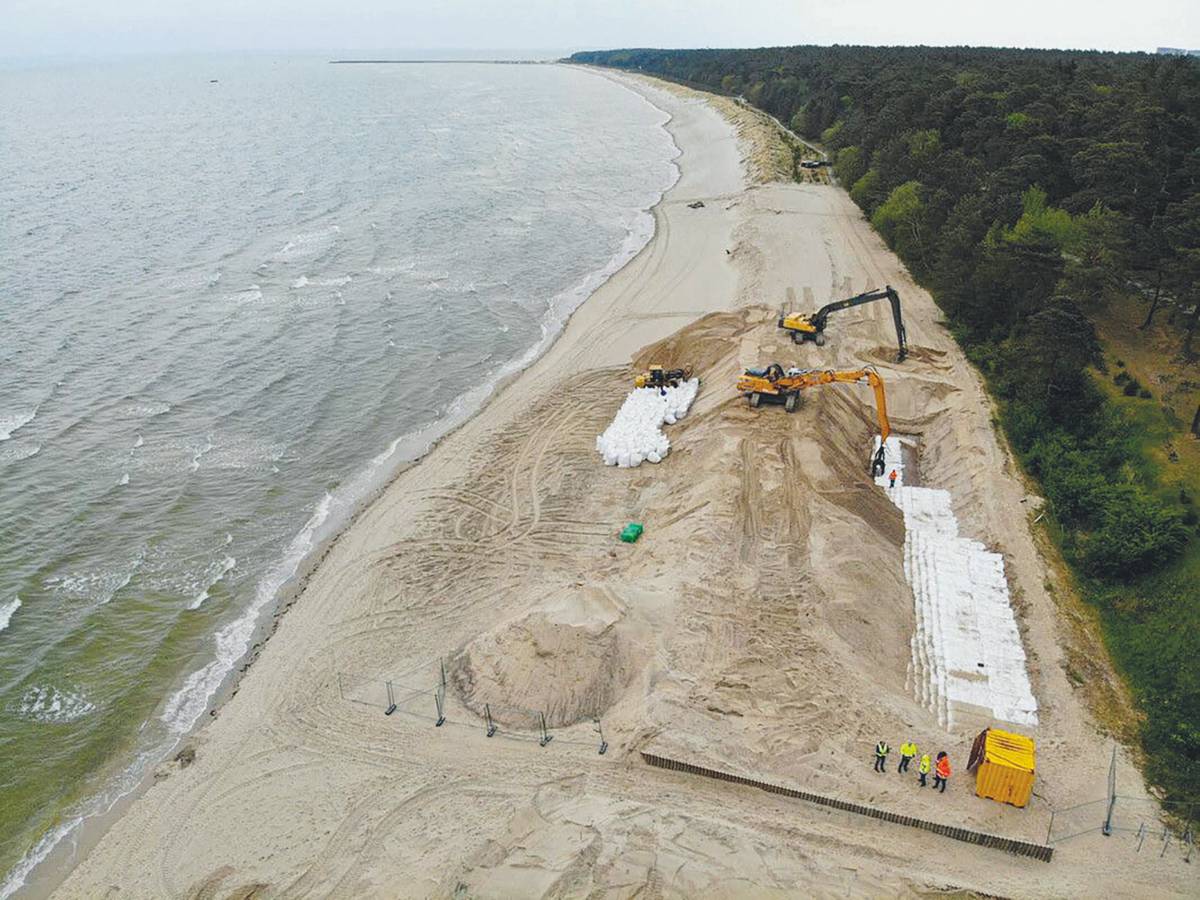 Secutex® Soft Rock are geotextile sand-filled bags, containers, or tubes manufactured from needle-punched Secutex® filter nonwovens. Geotextile sand containers (GSC) encapsulate fill materials like sand and are used as construction elements. In addition to geotextile sand containers made of single-layered nonwovens for covered applications, GSCs made of double-layered nonwovens are also available. These provide an integrated surface protection layer of rough fibres for exposed designs and adapt perfectly to a sandy environment.

The Secutex® Soft Rock geotextile sand containers were placed at the coast of Lubmin after the sand had been removed. Stacked in an offset manner and inclined towards the land side, they form a so-called geotextile wall. 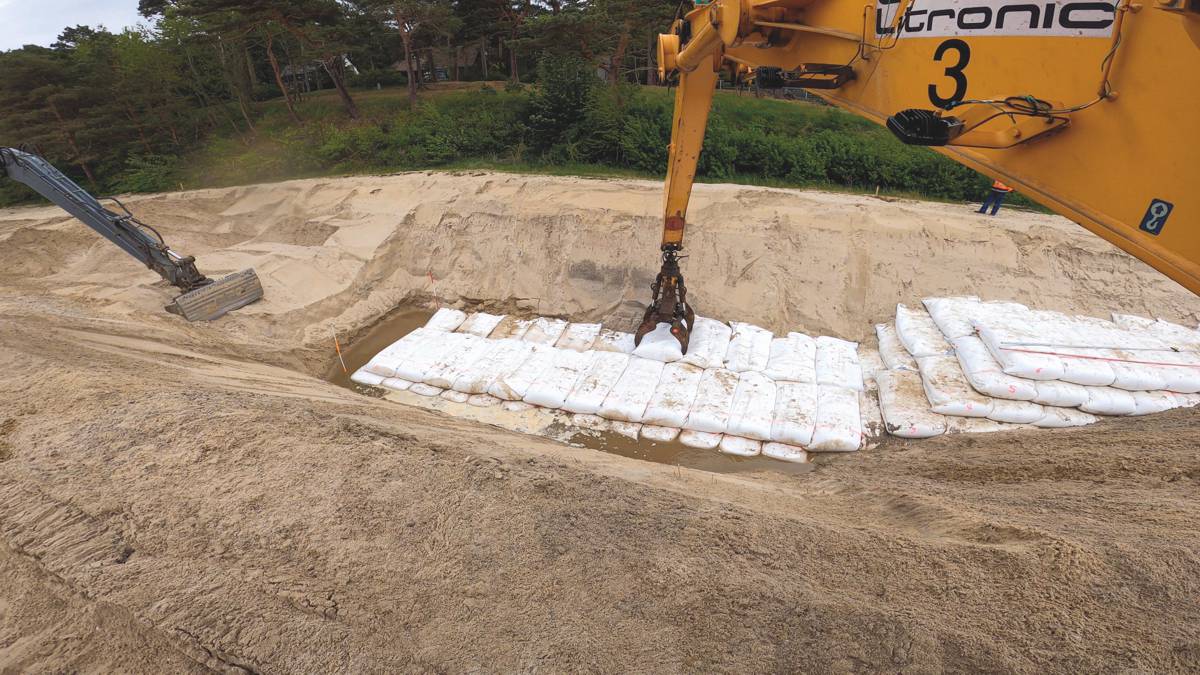 Geotextile walls for dune reinforcement are covered by sand for most of their service life and appear natural. Only after severe erosion caused by one or more storm surges, the geotextile wall becomes visible again. If that happens, the dune is restored in its overall geometry, and its appearance is harmoniously adapted to the landscape again.

Around 33,000 Secutex® Soft Rock GCSs were installed to reinforce 1.8 kilometres of the dune along the coast of Lubmin. Each container was filled with one cubic metre of sand directly on the beach. A filled sand container weighs approx. 1.2 tonnes.

The residents of Lubmin are delighted with the coastal protection solution and are happy about the improved safety. The mayor confirmed this with his statement that the geotextile wall made of sand containers is precisely the solution which the people of Lubmin have wanted for a long time.

Comparable coastal protection structures had already been installed in Rerik and Warnemünde, Germany.