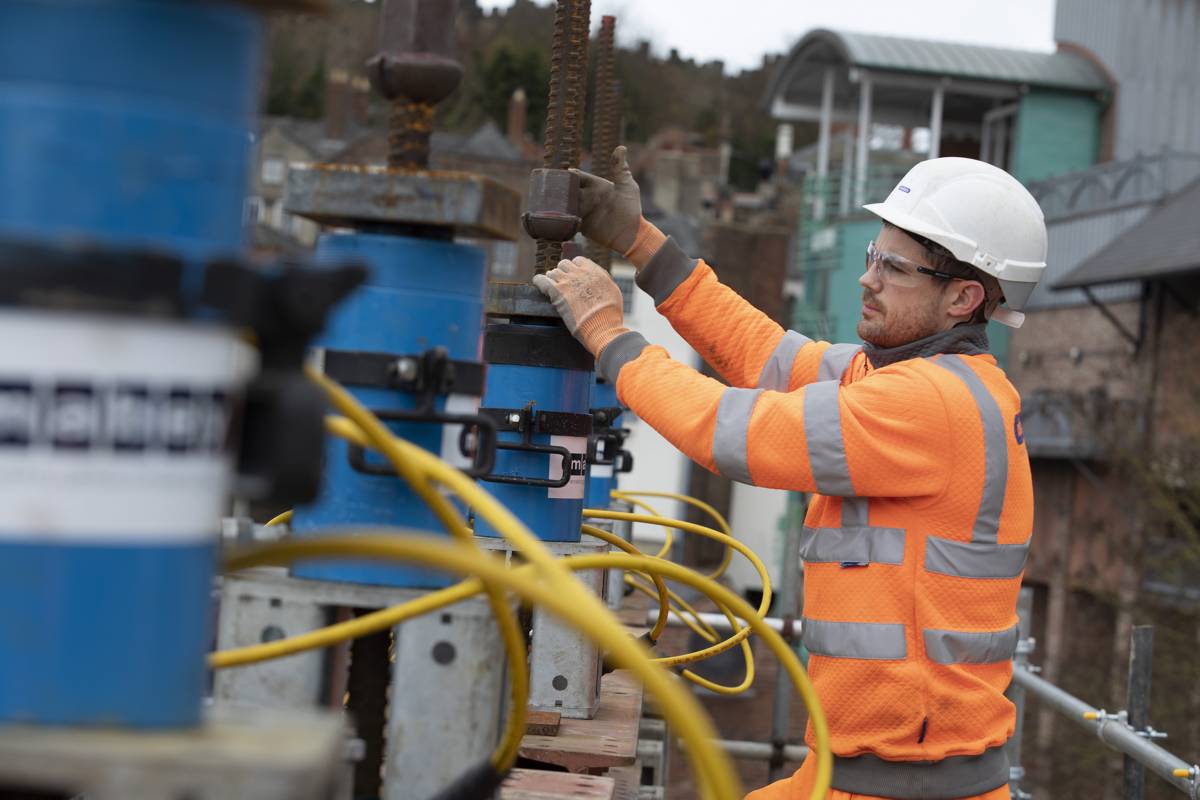 By supplying a unique truss system to a major repair project at New Elvet Bridge in Durham, temporary works specialist, Mabey Hire, have helped a crucial city transport job to get underway.

The innovative solution has allowed those working on the refurbishment to adopt the unusual approach of propping the 490 tonne bridge from above. In turn, the solution has contributed to the success of the £7.5m job and will help keep disruptions to a minimum.

First built in 1975, the New Elvet Bridge in Durham forms an essential part of the city’s transport infrastructure, linking the east and west sides of the city via the River Wear. As a result of its important role, the bridge is used by nearly 17,000 vehicles every day, helping to greatly reduce traffic in a busy metropolitan area. From public transport, to cars on the school run, the historic bridge plays a crucial part in the lives of locals and tourists alike, providing access to the world heritage site with Durham Cathedral and the internationally renowned Durham University.

Unfortunately, following nearly five decades of use, the bridge was in need of some essential repairs and Durham County Council identified a need to reconstruct a significant and critical portion of concrete used on the bridge. Alongside this, Durham County Council decided that other areas of the bridge would benefit from smaller concrete repair jobs. Additionally, the team recommended the installation of a cathodic protection system to further protect the bridge reinforcement. 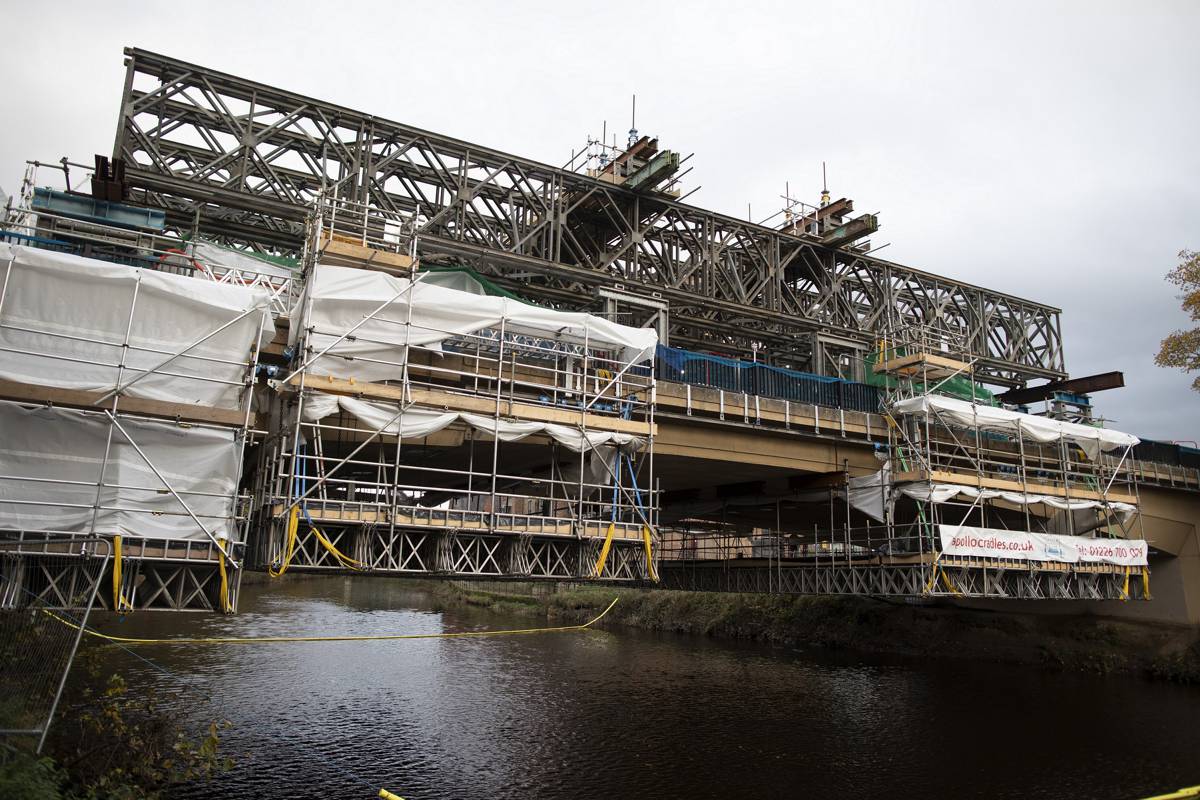 However, given the bridge’s considerable size, the project team faced some unique challenges. Most notably, the plan involved finding a way to lift the 490 tonne centre span bridge deck to enable the rest of the repair job. As the bridge is located above the River Wear it made standard propping techniques more difficult to achieve. Therefore, from an early stage of the Temporary Works development, it was clear the project required some ‘beyond the norm’ type thinking in order to meet its goals.

After consultation by Balfour Beatty, principal contractor Mabey Hire elected to use a bespoke truss system, which was made from Mabey Universal Bridging Panels, as opposed to a more traditional propping solution to conduct the lift and enable the repair work to get underway. This innovative solution also made use of Mabey Hire’s Mat 125 and Mass 50 high load propping systems in conjunction with a hydraulic system comprising of hollow ram jacks and DYWIDAG bar. The engineered scheme has helped the team to overcome the challenges of water and size, propping the bridge from above.

This effective solution allowed the bridge deck to be fully supported whilst the defective concrete was removed. What’s more, the powerful system was able to lift the considerable weight of the concrete deck up by 300mm so that the joints could be reconstructed. Once completed, the structure was lowered back into place for the rest of the repairs to be carried out.

With the project team required to lift the existing structure to such a height, it was essential to ensure the structural integrity of the bridge remained intact. To this end, Mabey Hire provided a real-time monitoring solution to track real-time displacement and load monitoring during the live jacking operations. Thanks to this technical expertise, the project team had greater insight into the bridge’s structural integrity and was able to ensure its repair efforts did not end up causing unintended damage. In turn, this made it easier to prevent project delays, which had to be avoided given the bridge’s important role in connecting both sides of the city.

Speaking on the project Gordon MacDonald, CEO at Mabey Hire commented: “New Elvet Bridge is a vital piece of infrastructure for the people of Durham and we’re pleased to be playing a part in helping it get back in action. Over the years, we’ve honed our craft in this area by working on similar repair projects like Paddington and Palatine Road. As a result, we can now help project teams to overcome similar challenges in an efficient manner, helping to ensure crucial structural repairs can take place.”

Dan Fawcett, Project Manager at Balfour Beatty, commented: “The unique solution developed by Mabey Hire has allowed us to undertake the contract works whilst supporting the central deck section. The lifting was undertaken in one smooth operation which was electronically controlled for greater accuracy which was critical for the utilities that are within the structure of the bridge.”

So far, Mabey Hire’s unique approach has paid off, with the repair project on course to be finished on schedule. Once completed, the New Elvet Bridge will feature a refurbished deck joint on the northern (Claypath) side of the bridge, as well as a continuous deck structure with reduced future maintenance requirements on the southern (Elvet) side of the bridge. The bridge deck will also be fully waterproofed with vastly improved drainage systems incorporated. Work on the project has already started and it is scheduled to be completed in Autumn 2021.