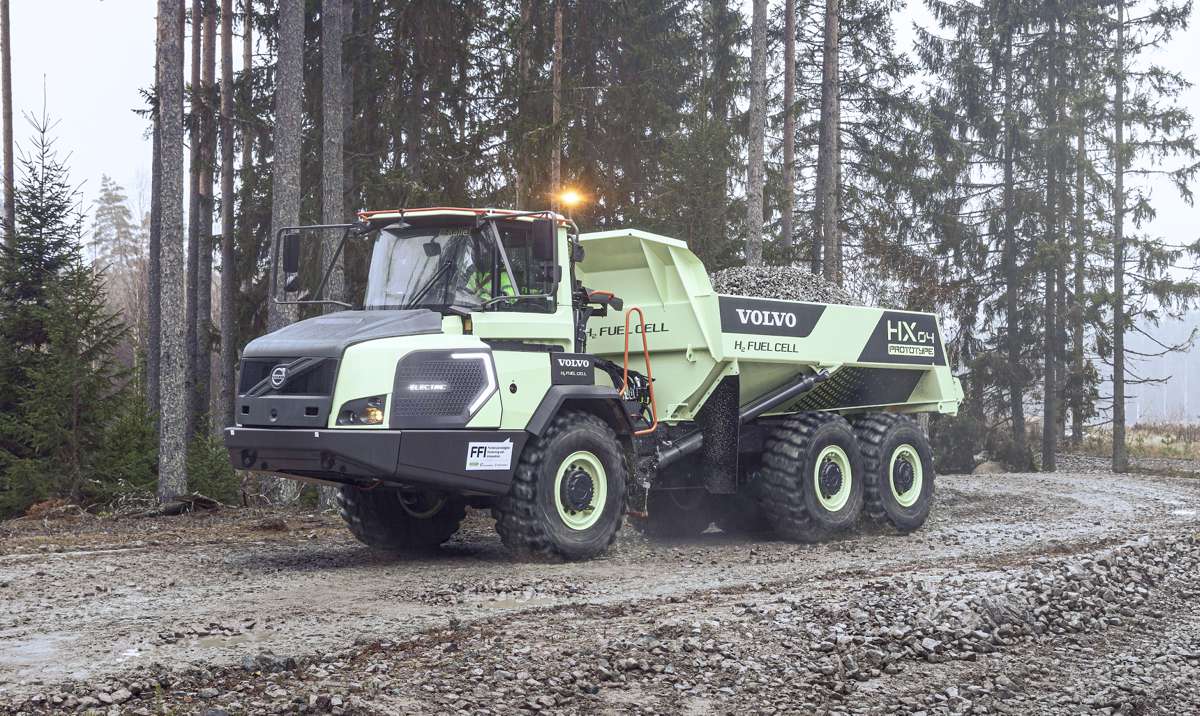 Volvo Construction Equipment (Volvo CE) continues acting on its commitment to drive change towards a net-zero future. Following the completion of a multi-stakeholder research project aimed at breaking new ground in hydrogen technology, the company has started testing of the world’s first fuel cell articulated hauler prototype, the Volvo HX04.

The results of the project will provide important insights into the possibilities provided by hydrogen and fuel cells as Volvo CE continues research for its future product development programs.

Besides battery-electric solutions, where Volvo CE is already offering the largest range of commercial products, the company’s efforts also include exploring the potential of electrification through hydrogen fuel cell technology. Now, an important milestone has been reached with the testing of a world-first emission free hydrogen fuel cell articulated hauler prototype, the Volvo HX04.

Carolina Diez Ferrer, Head of Advanced Engineering Programs at Volvo CE, says: “Being inventors of the world’s first articulated hauler more than 55 years ago, we are happy and proud to again drive change with this fuel cell hauler concept. While an early prototype, this innovation will give valuable insights into the opportunities of hydrogen in the energy transformation alongside battery-electric solutions. We believe that by exploring multiple technologies and working in partnership we can create the best path forward to decarbonize the construction industry.”

The Volvo HX04 is the result of a research project running between 2018 and 2022, with funding from FFI, a national collaboration between the Swedish Innovation Agency VINNOVA, Swedish Energy Agency, and Swedish Transport Administration, to support sustainable vehicle strategic research, innovation and development. Partners include Volvo CE, RISE Research Institutes of Sweden, who provided specialist competence on driveline development and safety, and PowerCell Sweden, a developer of fuel cell-based hydrogen-electric power solutions.

The development and building of the six-wheel prototype has largely been carried out at Volvo CE’s facility in Braås, Sweden – the same location where Gravel Charlie, the world’s first articulated hauler, was born back in 1966, giving the Volvo HX04 the nickname “Electric Charlie”. Engineers at the Technology Center in Eskilstuna, Sweden, have contributed with software development and knowledge gathered through its fuel cell test lab. While not commercially available, valuable insights from the concept will inevitably inform future production.

Infrastructure for hydrogen is still in development, which means refuelling the Volvo HX04 is an important aspect to solve in the project. Shell installed a state-of-the-art hydrogen refueling station at the Volvo CE test track in Braås. Both Shell and Volvo Group are founding members of H2Accelerate, a collaboration of companies working to foster conditions for the mass market roll-out of hydrogen trucks in Europe.

Oliver Bishop, Shell’s General Manager for Hydrogen Mobility, says: “Providing the fuelling infrastructure for this innovative project gave Shell the opportunity to demonstrate our technical capabilities in hydrogen, and enabled us to support one of our key global collaboration partners in taking another step forward in their decarbonization journey, which goes to the heart and intent of Shell’s Powering Progress strategy.”

The fuelling process for hydrogen vehicles is fast – the Volvo HX04 is charged with 12 kg hydrogen in circa 7,5 minutes, enabling it to operate for approximately four hours. Fuel cells work by combining hydrogen with oxygen and the resulting chemical reaction produces electricity which powers the machine. In the process, fuel cells also produce heat that can be used for heating of the cab. Fuel cells only emit one thing – water vapor.

In principle, a fuel cell works much like a battery except that it generates its own electricity from the hydrogen onboard as needed rather than being charged from an external source. Vehicles with fuel cell electric powertrains have an uptime, range, and fuelling time similar to that of combustion engine powered vehicles.

While battery-electric vehicles and biofuels are commercially available today – as more sustainable alternatives to diesel – commercialization of hydrogen-powered machines is expected during the second half of this decade.

0 0 0
Previous : Australian Scientists discover Superworms that can munch through Plastic Waste
Next : Septentrio and CompoTEK announce GNSS collaboration in Europe