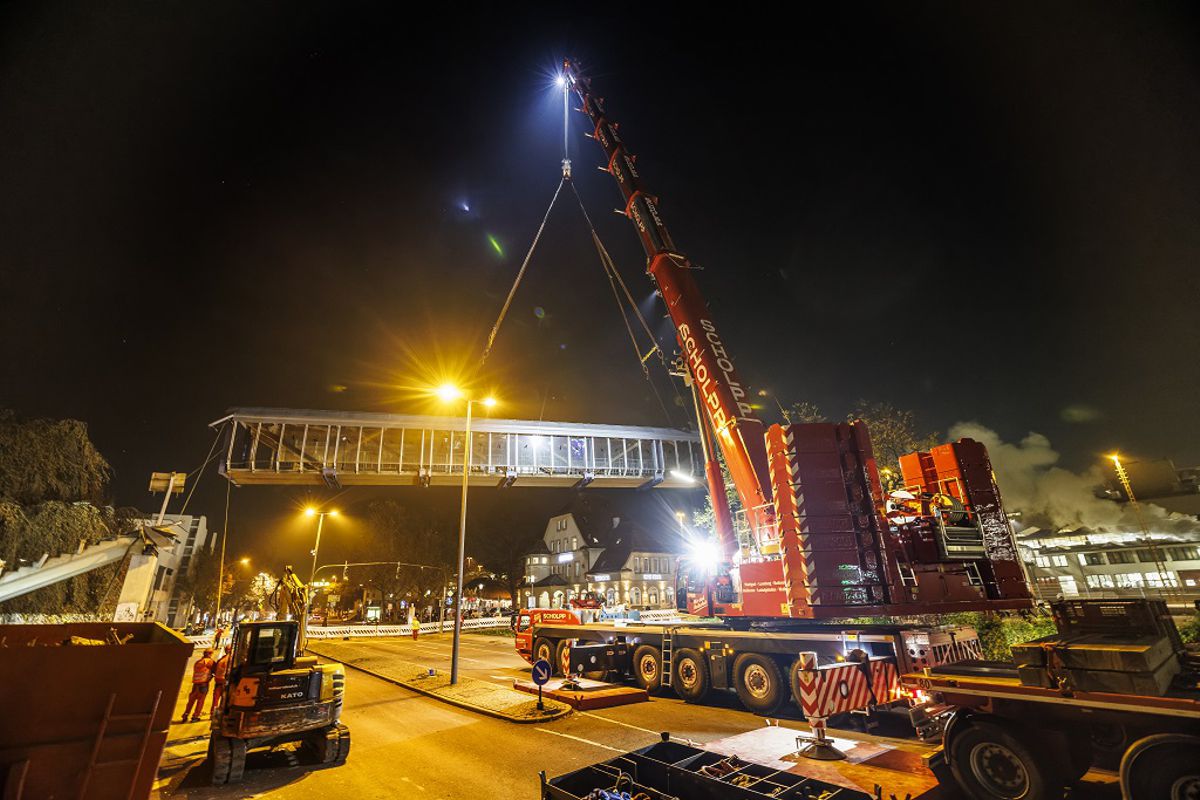 Thanks to its compact design and powerful lifting capacity, The Tadano seven-axle unit was able to shine while taking care of bridge projects in Tübingen, Germany.

The team at Scholpp Kran- & Transport GmbH is not fond of procrastinating – that is why it should come as no surprise that it took only a few days before the company’s newly acquired Tadano AC 7.450-1 saw its debut: At the Sindelfingen train station in the district of Tübingen, it lifted out the “Daimlersteg” steel pedestrian bridge so that the latter could give way to a new approach to mobility at the busy area. And right after that, the seven-axle crane travelled directly to its next work site in Tübingen, where it spent seven weeks showing exactly why it has quickly developed a reputation for being an absolute workhorse.

The team at Scholpp clearly took a liking to the machine and is sure that acquiring more cranes made by Tadano is the right choice: In addition to the delivered AC 7.450-1, the company has also ordered four Tadano AC 4.080-1 cranes and an AC 3.045-1 City unit with the optional E-Pack.

“The overall system behind the AC 4.080-1 was tremendously compelling: Thanks to its compact design, this crane combines the manoeuvrability of a 70-tonne crane with the lifting capacity of a 90-tonne one. And the advantages of the unbeatable AC 3.045-1 City in indoor environments are something that it’d be hard to do justice to with mere words,” Managing Director Martin Scholpp explains, making no bones about how much he trusts the Tadano brand. This is part of why he took delivery of the new AC 7.450-1 in person together with General Manager and Stuttgart Regional Manager Stephan Burkhardt at their branch in Leonberg, where the new crane was handed over by Tadano CEO Jens Ennen and Sales Manager Michael Zieger.

Stephan Burkhardt mentions that there are good reasons for the switch in brands in the Scholpp fleet, with the change being kicked off with the delivery of the Tadano seven-axle crane: “The AC 7.450-1 is simply the most powerful crane of its class even though it’s extremely compact. And it’s the latter that I think is a crucial advantage when we consider that work sites are getting tighter and tighter, particularly in urban areas,” he says, clearly excited about the “new kid in town” from Zweibrücken.

There are also other areas in which the AC 7.450-1 shines when used by the crane experts from Stuttgart, including its flexibility, for example. In fact, this also goes for the transformation process that has given rise to OneTadano, which Martin Scholpp and Stephan Burkhardt consider a positive development: “This reorganization is injecting new life into the Tadano crane portfolio at just the right time – the AC 7.450-1 with its numerous innovations, such as the Surround View system and the significantly enhanced Sideways Superlift system, is a perfect example of this. In fact, it’s no wonder that it’s becoming a best-seller that is also indispensable to our work,” both agree.

Given all the praise and lofty expectations, it goes without saying that the Scholpp team was paying very close attention to the AC 7.450-1’s first job. And the new model did not disappoint: Set up with 130 tonnes of counterweight, its powerful performance characteristics enabled it to lift out the 45-tonne “Daimlersteg” at the Sindelfingen train station at a radius of 18.5 meters at night-time, swing it to the side, and set it down on the ground.

“In hindsight, that was child’s play for our AC 7.450-1, but it was important in that it created vital space for the new mobility approach that will be used there,” reports crane operator Oliver Busch. 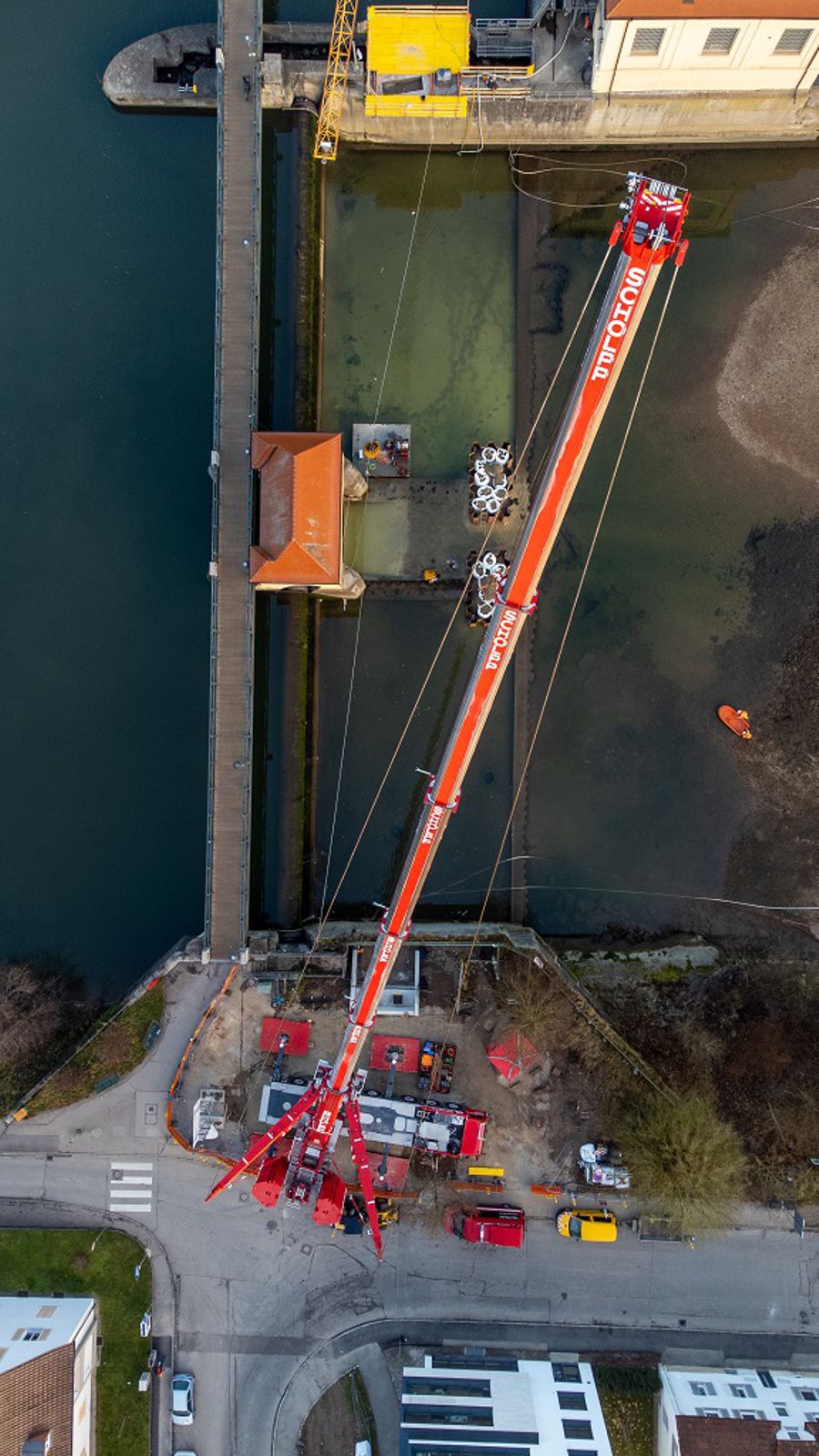 A much bigger challenge awaited the Tadano seven-axle crane just a short time afterwards. The unit’s second project saw it travel to another work site in Tübingen, where it would once again be working on a bridge project. But on a whole different scale. “We actually had to carry out a total of 60 foundation lifts for the construction of a new bicycle bridge,” reports Frank Wolber, sales manager for large cranes at the Scholpp branch in Leonberg.

This meant that the team needed a crane that would be able to meet two requirements above all: powerful lifting capacity and a compact design. After all, the job required for the nine-tonne bridge foundations to be lifted at an impressive radius of 60 meters – and at a work site where space was extremely tight to boot.

Getting to the work site itself was not a problem: It took the AC 7.450-1 just one hour to get there together with four transport trucks. Once there, the five-person Scholpp team was able to set up the AC 7.450-1 in a mere four hours despite the tight space conditions. “The way this crane is designed to make assembly easy was absolutely vital there,” Frank Wolber highlights.

For the upcoming lifts, the team chose an SSL configuration with a 70-meter boom length, 150 tonnes of counterweight, and three-part reeving with fully extended outriggers. The novel engineering design behind the Sideways Superlift system proved to be a crucial advantage for the job: The Superlift arms are mounted all the way in the front, on the head of the base section, meaning that they are ultimately longer and accordingly well-suited to larger lifting capacities.

And while on the subject of lifting capacities, this means that the AC 7.450-1 is considerably superior to other seven-axle cranes. “Lifting nine tonnes at a radius of 60 meters is really quite the accomplishment for a seven-axle unit, and yet our crane could have handled even more,” Frank Wolber says, clearly impressed by the powerful performance of the AC 7.450-1 and the way it ran without a hitch at the work site for the whole seven weeks. His conclusion after the project was successfully completed is just as positive: “The Tadano AC 7.450-1 showed that it’s a true workhorse throughout the seven-week project, during which it was working continuously – which was pretty much what we expected from the get-go,” he happily summarizes.