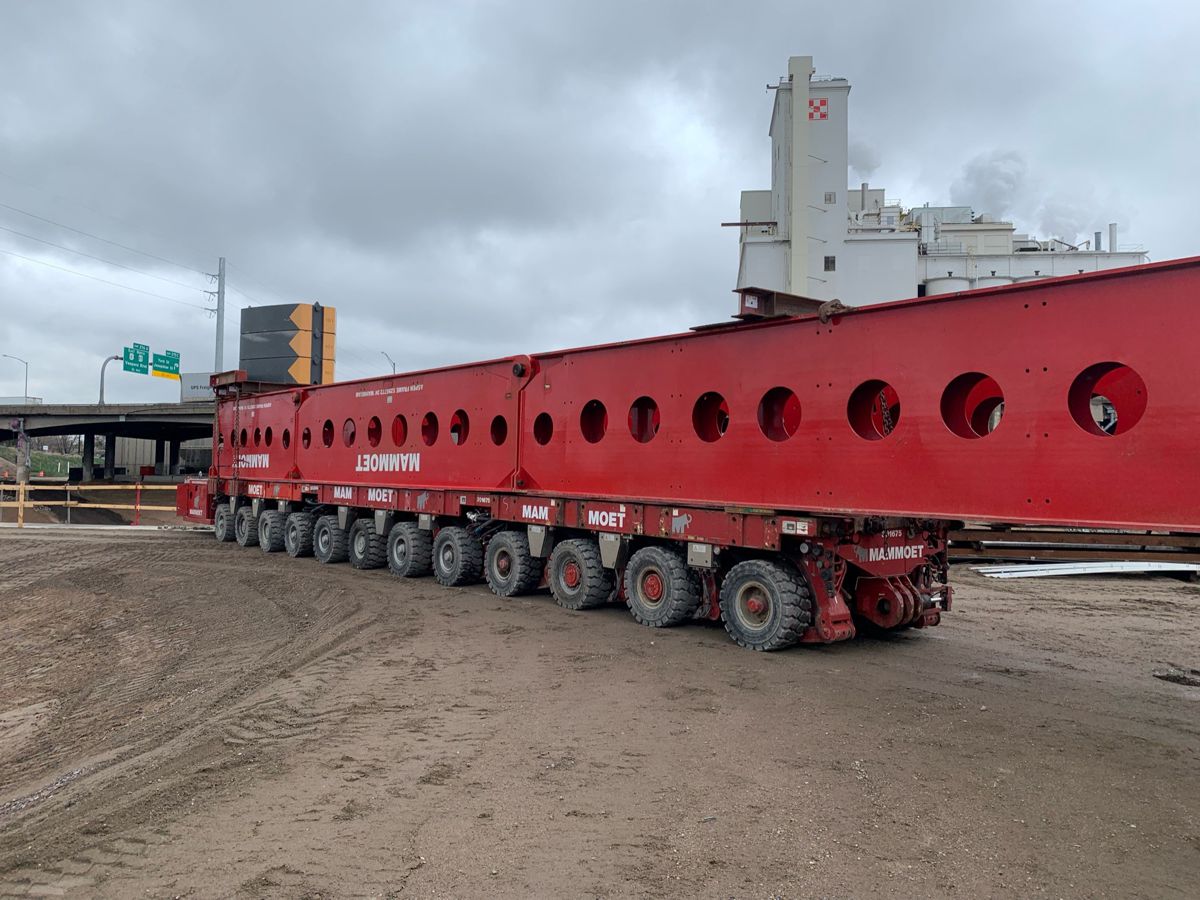 Mammoet was contracted to assist in two phases of work to set twelve steel rail bridge girders. The girders were located directly under Interstate 70 in Colorado, which prevented any cranes from performing the work.

Each girder measured approximately 21m (70 ft.) long and would be set on bearing pads over an existing dirt pit. Mammoet’s team came up with a solution using a unique cantilever setup on top of SPMTs, based on a previous execution.

The initial plan was for Mammoet’s team to use a skid system to launch each girder over the pit. Once in position, each one would then be transferred to another skid system which would side shift the girders sideways, above each bearing pad. Climbing jacks would then lower each girder into their final setting position. 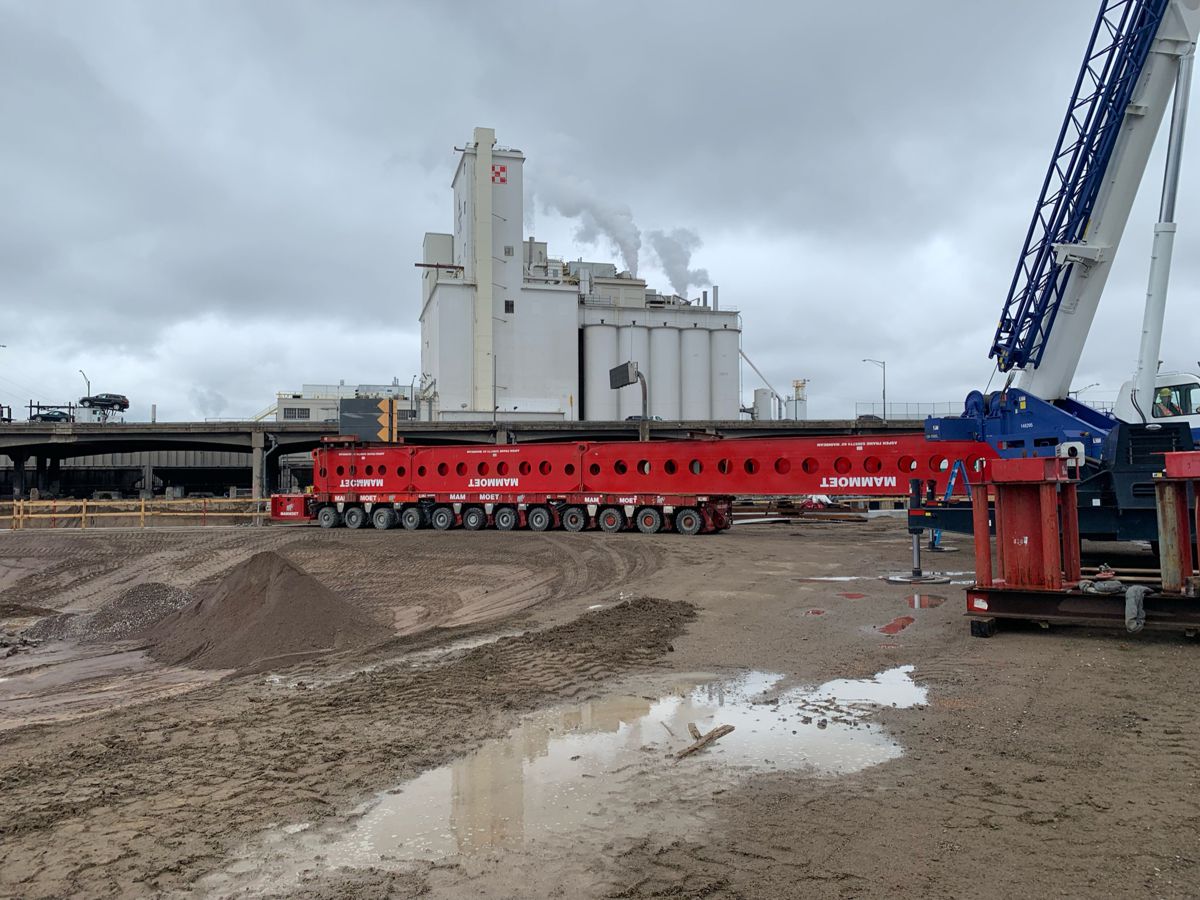 However, while on site for this execution, the field supervisor and team came up with the idea to use a cantilever setup on top of SPMTs instead, which was later confirmed and approved by Mammoet engineers. After discussion with the client, it was determined that innovative method would allow for a safer and smarter girder installation operation.

Two 30m (98 ft.) spans of Mammoet transport frame beams were lashed to the back of an SPMT trailer and then 27t (60,000 lb.) of counterweight was stacked over the lashing arrangement. This would act against the uplift created by the cantilever when holding the load, as the girders themselves weighed about 18t (40,000 lb.) each.

The 30m span of the transport frame beams provided the 12m (40ft.) of reach necessary to position each girder over its bearing pads. This specialized configuration was assembled and tested at Mammoet’s yard prior to execution, ensuring everything worked effectively before arriving at the project location. 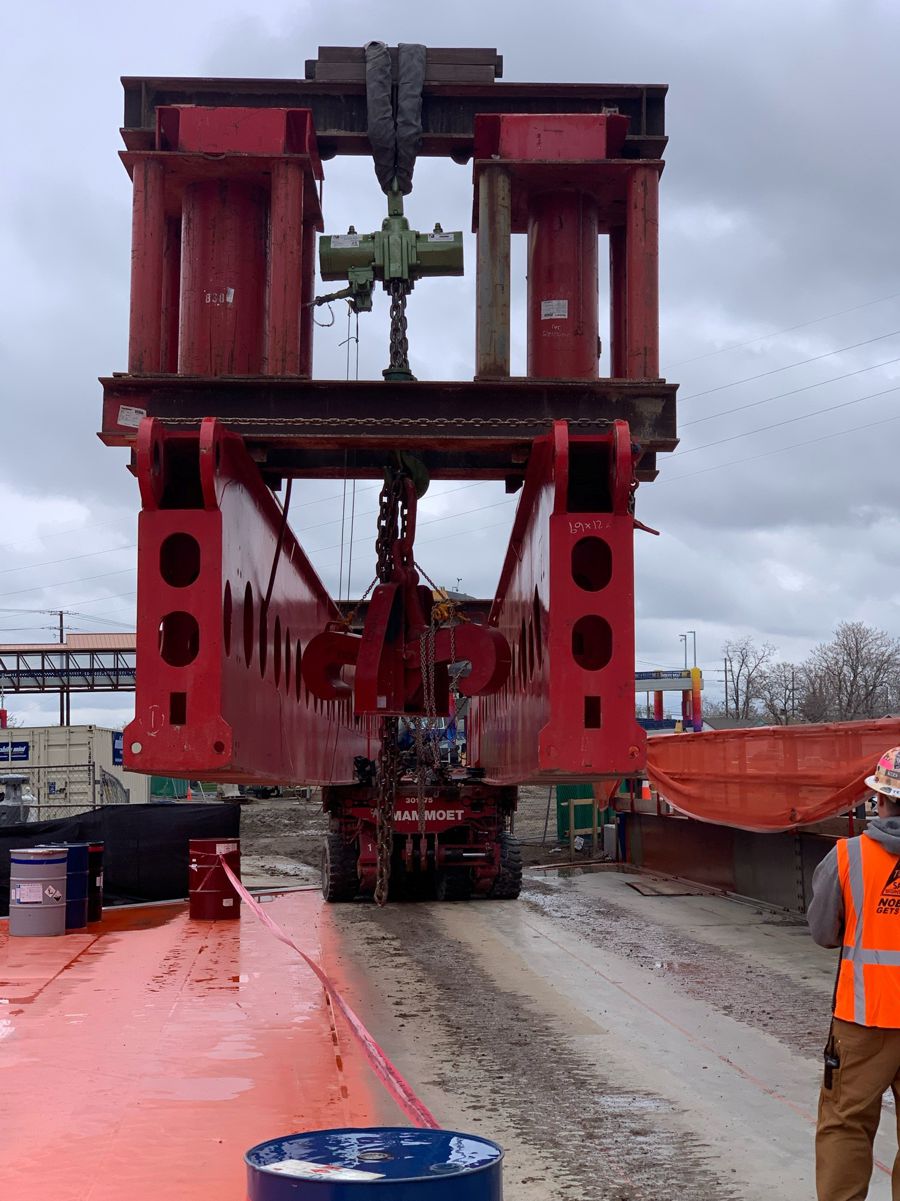 Once on site, a crane was used to set each girder from the roadway onto the SPMT trailer configuration. The cantilever trailer then drove into position so that the girder’s center of gravity (COG) was underneath the air hoist (hook).

Another 3-ton chain hoist was used to secure a small fraction of the girder weight near the front end of the trailer to prevent unwanted movement during driving and lowering. The girder was then lifted and driven further forward about 37 meters (121 ft.) until it was over its set position, then lowered down approximately 2m (6 ft.). Once in position, it was secured and unhooked from the cantilever.

Per girder, the entire operation took about an hour from start to finish – from pulling into position and picking to backing away and leaving each girder on its bearing pad for bolting. For comparison, the previous skidding plan could set up to four girders in three days.

The decreased handling time made this method of operation safer and allowed the site to be released ahead of schedule, reducing disruption. This continued collaboration through the phases with the customer, field personnel and engineering allowed Mammoet to reduce total time onsite for its scope, and ultimately kept the customer’s budget and schedule in order.

0 0 0
Previous : International Lithium Association to be the voice of the global lithium industry
Next : Service and quality puts Hitachi Wheel Loaders in first place for Recycling company