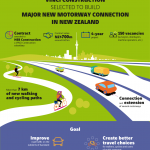 VINCI Construction subsidiary HEB Construction, has been chosen as part of an alliance contract to build the Northern Corridor Improvements Project (NCI Project). With a total value of $700 million New-Zealand dollars (around €415 million), the contract aims at creating a new connection north of Auckland between the Northern Motorway (State Highway 1) and Upper Harbour Highway (State Highway 18), as well as extending the Northern Busway to Albany and add more than 7 kilometres of new walking and cycling paths.

The project is an important link in helping to realize the full benefits of the Western Ring Route by giving users an alternative route to State Highway 1 and the Auckland Harbour Bridge. It will also create better travel choices for walkers, cyclists and users of public transport. The Alliance is now tasked with finalising the detailed design and beginning construction early this year. The project will be undertaken in stages over the next four years. The first steps towards construction will include road resurfacing and the installation of moveable median barriers.

Since VINCI finalized the acquisition of HEB Construction in June 2015, the company worked in New-Zealand as a member of The North Canterbury Transport Infrastructure Recovery Alliance (NCTIR) on reconstruction following the earthquake that struck the Kaikoura region in November 2016. HEB Construction is also working on the Nga Puna Wai sports centre and on several marine works projects: Centreport container quay repair, Port Otago quay extension and Port of Lyttelton terminal construction.