The Swiss based Boschung Group, a leader in Surface Condition Management, has announced the delivery of twenty-two high performance airport de-icers to the new Beijing Daxing International Airport (BDIA).

Beijing’s new airport, will greatly improve China’s Capital air traffic to support the existing Beijing Capital International Airport (BCIA) who have been a long-standing Boschung customer. Both airports are managed by the group, so their positive experience with the existing Boschung maintenance fleet at the BCIA was the principal reason that led to the decision to choose in favour of Boschung and their state-of-the art de-icing technology for BDIA, even though Boschung’s bid was the highest!

With the opening of the new “Beijing Daxing International Airport” (BDIA) the Chinese government will support the existing “Beijing Capital International Airport” (BCIA) and manage one of the busiest air traffic regions in the world. From September 25th, 2019, which is the 70th anniversary of the People’s Republic of China, passengers from and to Beijing will have a second choice. 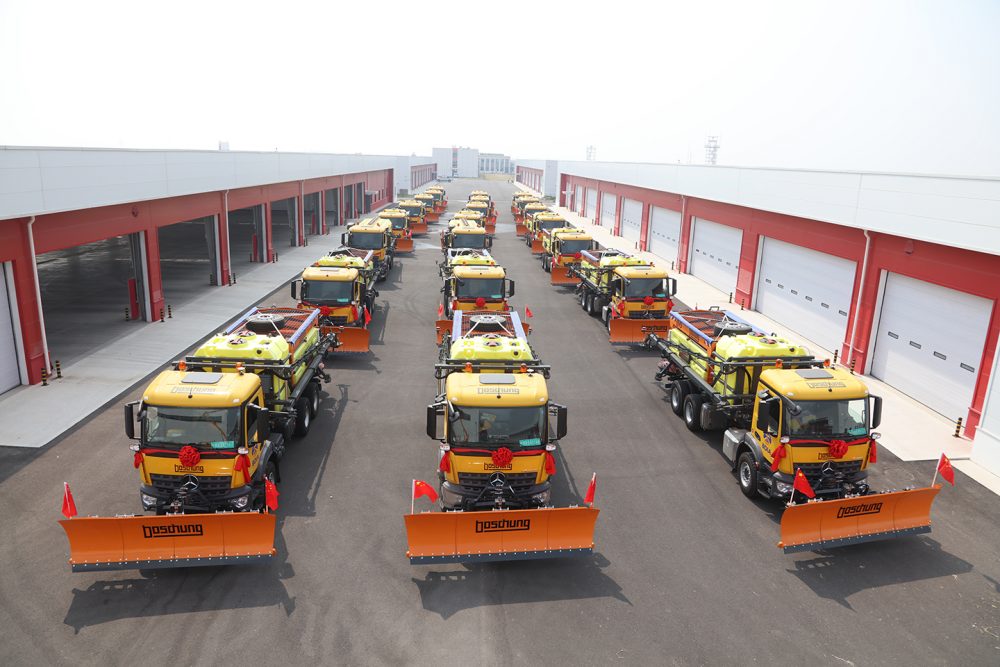 The new airport will be a new aviation hub in China with an estimated passenger capacity of 45 million by 2021 and 72 million by 2025.

With 700,000 square metres, Daxing’s main terminal will be the largest single airport concourse in the world, with four runways operating on the day of the opening, and three additional runways to be opened later on.

Beijing’s continental climate is characterized by very cold and dry winters, with hot summers. Normally, there is little snow in Beijing, but frequent appearing weather incidents
during wintertime can suddenly lead to dangerous ice or snow.

Boschung has collaborating closely for years with BCIA on all key elements of the Surface Condition management of the new airport such as Ice Early Warning System, snow removal, de-icing along with fleets and data management. This has helped to ensure overall safety, cost-effectiveness and sustainability.

Today there is a powerful Boschung fleet of 14 Jetbrooms, 11 airport De-Icers and 2 IMS spreaders operating at BCIA.

As both Beijing airports, BCIA and BDIA, are managed by the same group, Capital Airports Holding Company (CAH), a fully owned entity of the Civil Aviation Administration of China (CAAC), Boschung’s bid was supported by proven technology already on the Beijing airport ground. 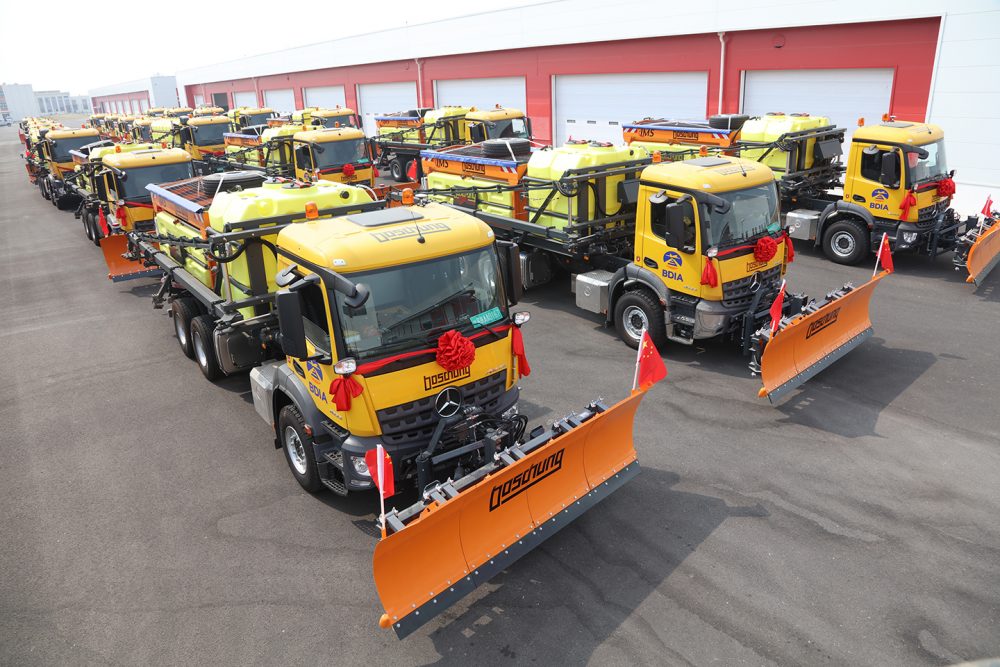 Though the mild snow conditions in Beijing allowed low-cost and inferior quality suppliers to enter the bidding with very low prices, the CAH officials decided in favour of Boschung’s high-quality solution, at a higher price, avoiding compromising safety and airport efficiency.

Another important key factor is the 24/7 support service delivered by Boschung’s subsidiary in Beijing, which guarantees the fleet managers adapted support at all times.

The 22 new Boschung airport de-icers at Daxing are composed of 2 SDA S5, 14 SDA M2 and 6 SDA M2D5. The equipment is mounted on Mercedes Benz trucks. The SDA S5 series (liquid de-icer) can be equipped with cascaded PE liquid tanks for the de-icing of particularly large areas. For the spraying of liquid thawing agents the SDA S5 series uses a sophisticated spraying block system that guarantees a much better accuracy with homogenous spraying patterns regardless of the working speed. But the SDA S5 is also less prone to technical failures as each spraying block is equipped with tiny spray nozzles working independently. 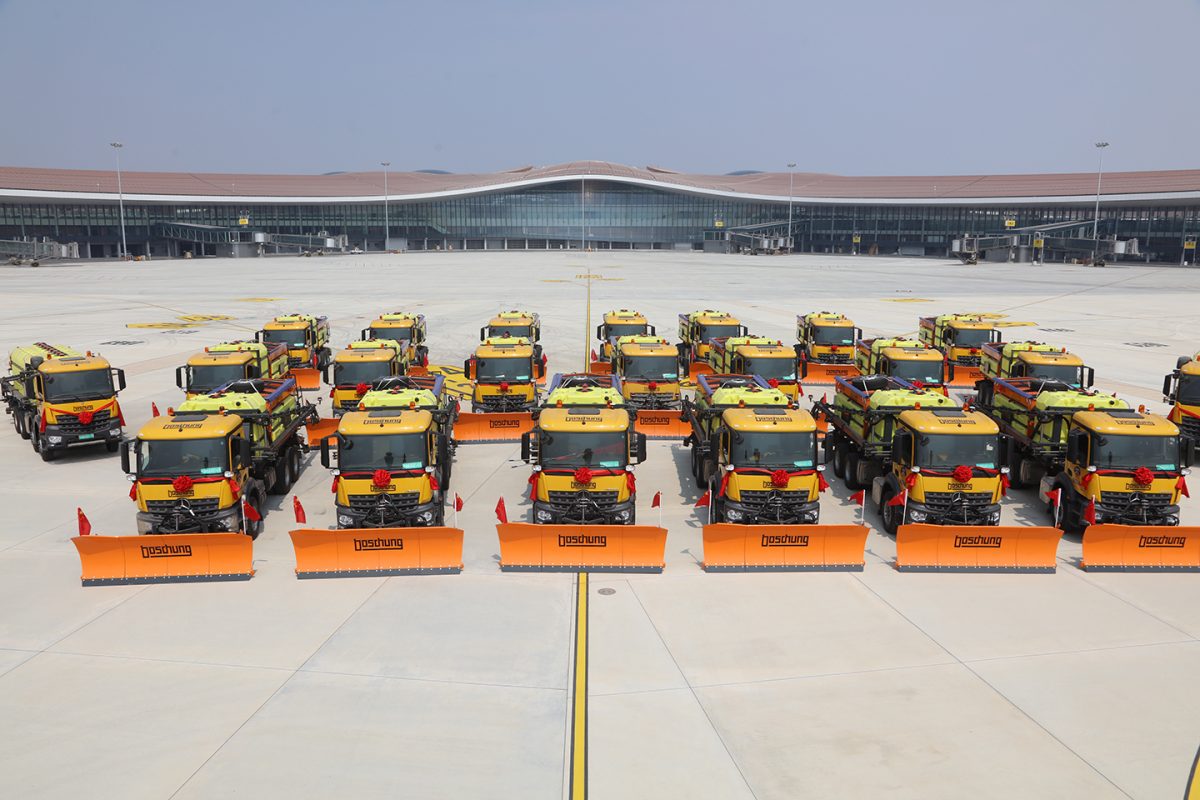 This combination of several efficient Boschung spreading technologies will ensure safety and efficiency of all runways and taxiways at BDIA in a sustainable way. All these innovative, user-oriented, solutions and service assets make Boschung a long term and reliable partner for the maintenance and safety of airport traffic surfaces at Daxing and airports in China.