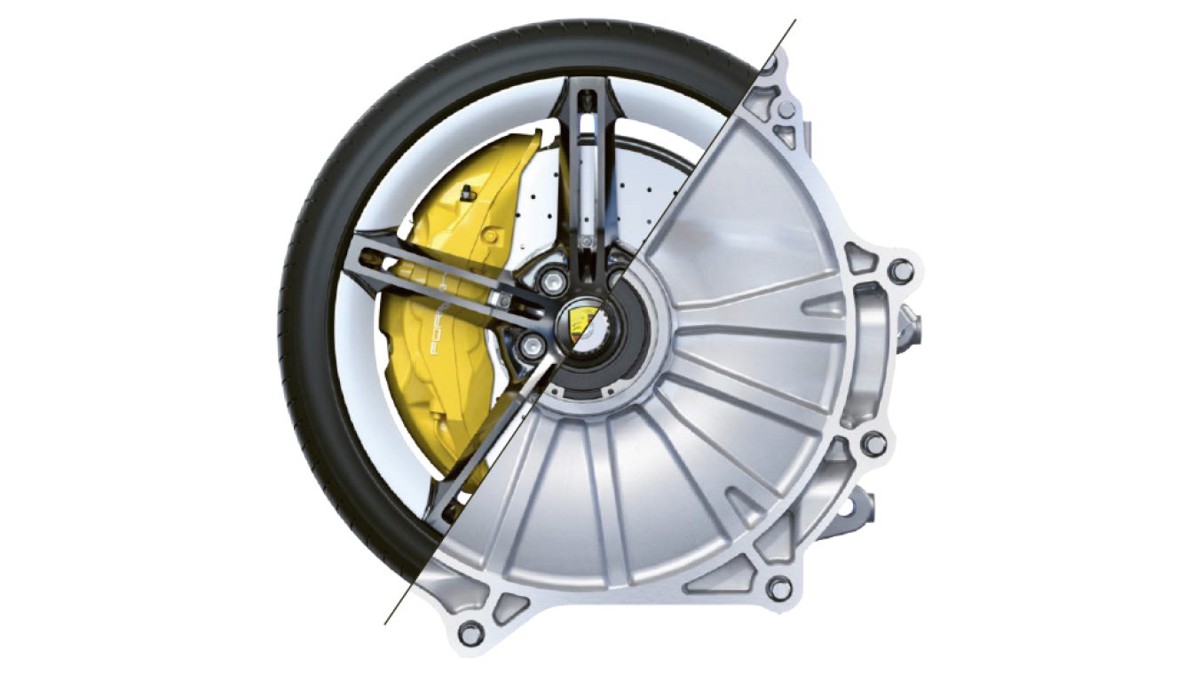 Battery electric vehicles place new demands on the chassis, particularly when it comes to braking and recuperation. Developers at the Porsche Group are working on new concepts for brake force distribution which will enable better recuperation without compromising comfort.

Chassis developers are challenged by electrification on two fronts: Batteries make the vehicles heavier but, on the other hand, the vehicles often exhibit better driving dynamics. Both of these factors usually necessitate a more powerful hydraulic wheel brake. However, this reduces efficiency and sacrifices range because the weight increases and consumption rises.

The Porsche Taycan gets by without a larger brake system—thanks to recuperation: As soon as the driver presses the brake pedal, the electric motors switch to generation mode. Once they do, it is no longer the motors driving the wheels, but the other way around. This brakes the vehicle and, at the same time, generates electricity that can be used to charge the battery. What’s crucial for chassis developers is that recuperation does not require the brake to be made larger despite the increase in driving dynamics. The brake therefore has no negative impact on the range.

In the Taycan, 90 percent of all times the driver brakes in everyday situations, this can be done using electric power only, i.e. without the involvement of the hydraulic system. The latter is only used at speeds below 5 km/h, when the electric motors develop barely any braking power. In addition, the friction brake steps in when the electric motors do not have sufficient deceleration power, for example during full braking from high speeds.

One of the major technical challenges in chassis development for battery electric vehicles (BEVs) is blending, which is when regenerative and hydraulic braking are combined. “The driver must not feel the transition between the systems,” emphasizes Martin Reichenecker, Senior Manager Chassis Testing at Porsche Engineering.

Guaranteeing a smooth transition places great demands on the technology, because the braking systems operate differently: While an electric motor always delivers the same braking torque, the torque from its hydraulic counterpart may vary each time due to environmental influences such as temperature and humidity. It therefore may be the case that the hydraulic braking power differs from the electric braking power at the transition point. The driver feels this as a jolt.

Porsche has developed algorithms for the Taycan that prevent this from happening. They monitor the hydraulic system continuously: During each charging process, the brake is calibrated to determine the current ratio of brake pedal travel to brake pedal force. This allows the algorithm to estimate how much power the hydraulic system will deliver the next time the vehicle is braked, and deploy it precisely so that the transition to recuperation mode remains smooth.

In vehicles, braking power is usually unequally distributed: Two thirds of it is provided by the front axle, one third by the rear axle. The same ratio applies for the electric system in the Taycan: The front electric motor provides two thirds of the braking power, the rear one provides one third—although the rear motor is larger and could theoretically contribute (and recuperate) more. This potential could be leveraged by varying the distribution of the braking force between the axles.

In this context, it is important to note that, for reasons of driving stability, the maximum rear-axle contribution must be limited according to situation to ensure a sufficient stability reserve. “The electric motor that can absorb the most energy would then deliver the greatest braking torque,” explains Ulli Traut, Function Developer and Integration Engineer Regenerative Braking at Porsche AG.

As with the interaction between the hydraulic and generative brakes, the shifts in forces must not compromise driver or passenger comfort. One solution would be to have two algorithms operating at the same time: The first one analyses the driving situation and suggests a ‘corridor’ in which the braking force is optimally distributed between the front and rear axles—based on test bench data. A second algorithm selects a distribution that suits the current driving situation from the most efficient ‘corridor’.

According to expert Traut, this solution would guarantee ideal deceleration and bring a “significant gain in range”.

Until now, the brake in automotive engineering has been a relatively isolated system of its own. This has now changed in electric vehicles, because many more parts of the vehicle are involved in deceleration: Powertrain, power electronics, and battery. What’s more, the brake has its own display in the instrument cluster. All of this requires more interdisciplinary work from chassis developers. The engineers working on the brake, for example, will have to confer more closely with their colleagues working on transmission in the future, for example, because recuperation also involves the electric motor and therefore the transmission (the Taycan has a two-speed transmission on the rear axle).

This creates new demands on its load-bearing capacity—but also offers new opportunities, as Reichenecker points out: “Developers have completely new degrees of freedom.” The potential ability to make the distribution of braking force between the front and rear axles variable is the best example of this, he says. Reichenecker expects that technology for the chassis and drive components will continue to merge. “In future architectures, most software functions will presumably be united in a single control unit.”

When it comes to driving, some manufacturers of electric vehicles are concentrating on what is known as one-pedal driving. The principle is that when the driver takes his or her foot off the pedal, the vehicle starts recuperating energy right away—and in extreme cases brakes so hard that the brake lights come on. This means that in most situations, the car can actually be driven with one pedal.

Porsche, on the other hand, makes use of coasting, which is the more natural process of allowing the vehicle to continue to roll unpowered. Recuperation only starts when the brake pedal is stepped on. “This is a more efficient way of driving, because it keeps the kinetic energy in the vehicle,” says Reichenecker. One-pedal driving, on the other hand, recuperates first, and only then converts the recovered energy back into propulsion. “That results in twice the losses.”

Another positive effect of recuperation is that there is less wear on the hydraulic brakes. “We expect that brake pads will have to be replaced due to aging in the future rather than wear,” as Traut surmises.

A feature has been developed for the Taycan to keep the brake discs clean, now that they are being used less often: The vehicle brakes at regular intervals using the hydraulic system only, and without the electric motors, to remove dirt from the discs. This could be a considerable advantage in the future, because the EU is planning for brakes to emit fewer particulates in the future.

The new Euro 7 emissions standard, which is due to come into effect in 2025, will be the first time that limits are set for brake abrasion. This will then put electric vehicles like the Taycan, which only uses electricity nine out of each ten times it brakes, in a good starting position.