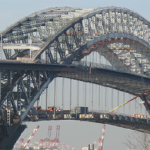 Continuing to build on his commitment to growing New Jersey’s economy and making the state a premier business destination, Governor Chris Christie today announced that as of June 30, the $1.6 billion raising of the Bayonne Bridge roadway will allow the world’s ultra-large, environmentally friendly container vessels to pass beneath the span, gaining access to the Ports of Newark, Elizabeth, and Staten Island.

Governor Christie, who joined Port Authority of New York and New Jersey and other officials at Maher Terminals in Elizabeth, said the existing lower roadway of the bridge, which had prevented larger ships from entering the East Coast’s busiest port terminals after passing through the recently widened Panama or Suez Canals will be removed six months ahead of its recently revised year-end schedule.

“The ‘Raise the Roadway’ project is a true game-changer for the port, one of the state’s and this region’s most significant job creators, employing 336,000 people and generating billions of dollars in economic activity,” said Governor Christie. “With the lifting of the bridge’s navigational restrictions, we expect these numbers to continue to grow and shipping lines to begin to send their larger ships to this port. As a result more businesses will seek to locate in the port area to create jobs, especially in the skilled trades while garnering the benefits being close to the port can bring. These businesses already generate nearly $53.5 billion in economic activity.”

The bridges height will accommodate the world’s largest container vessels.

The Bayonne Bridge currently has a navigational clearance of 151 feet, limiting the size of the vessels that can travel under it to approximately 8,000 to 9,000 TEUs (20-foot equivalent cargo size containers). The newly raised roadway will provide a clearance of 215 feet – the same as the Verrazano-Narrows Bridge – allowing ships with up to 18,000 TEUs to pass below to access terminals located in New Jersey and Staten Island. The largest ship currently able to navigate the waters below the bridge is 9,800 TEUs.

“‘Raise the Roadway’ is a visionary project, accomplishing what once seemed impossible for the long-term benefit of our regional economy,” Port Authority Chairman John Degnan said. “It began with the unprecedented accomplishment of building a new roadway through an existing bridge structure, with traffic continuing to flow on a lower roadway. Removal of the lower roadway will make it one of the most important American infrastructure projects in history to facilitate global trade.”

Larger ships will reduce operating costs for shipping lines, which can ultimately result in lower prices for standard consumer goods sold in the New York-New Jersey region and beyond, such as beverages, clothing and furniture.

To the benefit of area motorists, in February, the project, achieved a new milestone with the opening of the elevated roadway through the existing arch bridge and over the original roadway, while maintaining traffic flow on the lower span. The bridge will be built to its full width by 2019 – at which point motorists will benefit from a fully modern, safer and wider roadway with four 12-foot wide lanes in each direction, outside and inside shoulders and a shared-use pedestrian and bicycle path.

“Raise the Roadway,” coupled with last year’s completion of the Port Authority and federal government’s shared investment in the $2.1 billion 50-foot navigation channel deepening project, $600 million of Port Authority investment spent on on-dock rail projects and billions spent by private sector terminal operators, will allow the Port of New York and New Jersey to remain the most attractive East Coast option for shippers in transporting their cargo.

The project, managed by the Port Authority of New York and New Jersey, is under construction by the joint venture of Skanska/Koch/Kiewit Infrastructure Co.

The Port of New York and New Jersey is the busiest port on the East Coast and the third busiest in the country after Los Angeles and Long Beach.

More information about the “Raise the Roadway” project, including a time-lapse video of construction and on-site camera feeds, can be found here.

0 0 0
Previous : Kuwait funds 81 km upgrade of the Gbarnga-Salayae Road in Liberia
Next : Yutong Dynamic Compaction Machines is the first to participate in the Trimble Ready® program  in China