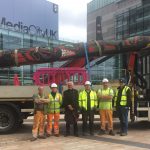 What’s the difference between a streetlight and totem pole? Not a great deal if you work for Urban Vision, the joint venture between Galliford Try, Salford City Council and Capita Simons which carries out streetlighting and highways maintenance projects for the Council.

Urban Vision was called upon to transport the totem pole from a warehouse in Salford to the plaza outside Media City where it was filmed for the BBC Antiques Roadshow. Afterwards the team returned to pole to the warehouse for future restoration.

The pole was commissioned by the Manchester Liners company in 1969 to recognise the city’s trade with Canada and erected at Salford Docks. It was taken down in 2005 due to wood rot. Salford councillor Steve Coen, who has studied Salford’s connections with north America, campaigned for 10 years to have the totem pole restored.

Coinciding with the BBC show, members of the Kwakwaka’wakw tribe visited Salford to assess the pole and plan its restoration. Their former chief carved the pole originally.

Heath Horton, Streetlighting Supervisor for Urban Vision, said: “We have a vehicle with a lifting capacity to safely load and transport 12m long streetlight columns. It proved just as suitable for a 10m long totem pole weighing over 2.5 tonnes!”

Housing developer Fortis Group said the pole will be included as part of a £150m plan to build 700 new homes on the original site.

0 0 0
Previous : Bridge on the move in 24-hour M6 Motorway operation this weekend
Next : Volvo excavator completes the NC500 500 mile race around Scotland