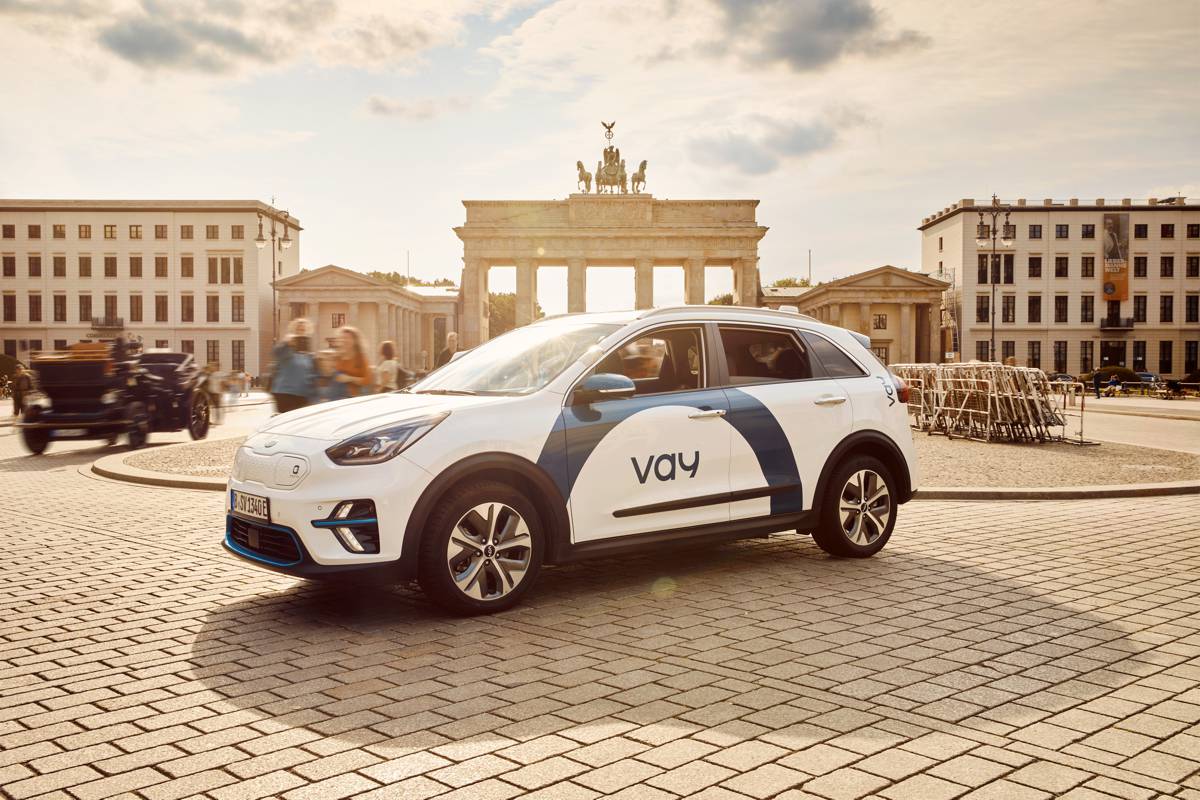 TeleDriving as a new path to Autonomous Mobility Future

TeleDriving as a new path to Autonomous Mobility Future

Vay, the world’s leading teledrive mobility company, has announced that it will become the first company with a driverless, certified commercial mobility service operating on public streets in Europe as soon as next year.

Operating in stealth mode since its founding in 2018 until today, the company reveals a bold new plan to put ‘teledrivers’ at the steering wheel of vehicles in metropolitan areas.

“Our advanced technology enables a person (the “teledriver”) to remotely drive a vehicle (“teledriving”). This allows for a safe and timely rollout of driverless mobility services that users and cities trust as a human is still in full control,” said Vay co-founder and CEO Thomas von der Ohe.

Over time, while serving customers and based on high quality teledriving data, Vay is able to launch autonomous features gradually – starting with the ones that are safe and ready to deploy.

Vay’s fleet of vehicles is already operating with safety drivers across all of Berlin today. Recent technological and regulatory advancements will allow Vay to remove the safety driver from its vehicles next year.

Vay’s system is built to be safer than conventional driving by controlling the top four causes of fatal urban accidents, which are speeding, intoxication, distraction, and fatigue. In addition, when compared with conventional driving from within a car, Vay’s teledrivers have augmented skills, including 360-degree blindspot-free vision. Lastly, Vay’s system is engineered to the highest and latest automotive safety and security standards (ISO26262, ISO21434) and has redundancies throughout its system, including the simultaneous use of multiple cellular networks.

“As our system does not rely on expensive 360-degree lidar sensors, and is therefore comparatively inexpensive, our way of rolling out driverless vehicles will not only enable consumers to experience driverless mobility sooner, but also provide a highly scalable solution that can be integrated into every car. Having spent 6 years in Silicon Valley, we are now eager to build a global, first-of-its kind, deep-tech company from Europe”, added von der Ohe.

Vay will start by offering the most affordable door-to-door transportation service. People can order a car, which arrives within a few minutes, and then drive themselves to their destination. Upon arrival they will be able to leave the car without having to park it. This will be offered at a fraction of the cost of an Uber ride, which is why Vay believes its service will be highly competitive with owning a car in urban areas.

However, going after urban car ownership is only one objective. Vay’s technology can be applied to many other use cases, ranging from ride hailing to ride sharing, from parcel to food delivery, from buses to trucks, and from mining to construction machinery.

The company’s ambition is to not only bring Europe back to the forefront of the race to develop driverless vehicles that will solve many of today’s transportation challenges, but also to create a new job category: the teledriver.

The teledriver job has significant benefits over taxi or ride-hailing jobs, as teledrivers can work from the same place every day and are paid a fixed income. Vay believes that teledriving will create more inclusive and gender-balanced employment opportunities due to the additional safety of drivers and customers not having to share the same physical space, especially during the pandemic and at night.

Vay’s team wants to address the most pressing issues facing metropolitan areas around the world today, including traffic deaths, air pollution, and high costs of transportation.

Vay has been closely engaged with European and US regulators and policy-makers, who have been supportive because Vay will offer affordable mobility services to citizens who are currently underserved by existing transport solutions, whether that is in city centers, suburban or rural areas. Additionally, introducing sustainable, electric, and highly utilized vehicles means less pollution and less cars in cities.

Vay was founded by Thomas von der Ohe, Fabrizio Scelsi, and Bogdan Djukic in September 2018. The team has previously worked at companies such as Tesla, Google, Waymo, Zoox, Skype, Byton, Argo, Amazon, Uber as well as Audi, BMW, and Daimler. Vay has raised over 30m USD in Series A funding from leading European VCs such as Atomico, Creandum, LaFamiglia, System.One, Visionaries Club, Signals as well as business angels Patrick Pichette (Partner at Inovia Capital, chairman of the board at Twitter, former global CFO at Google), Cristina Stenbeck (Board member of Spotify, chairman of the board at Zalando), Qasar Younis (co-founder and CEO of Applied Intuition, former COO and Partner of Y Combinator), and Formula 1 champion Nico Rosberg. The company has offices in Berlin, Germany, and Portland, OR.

0 0 0
Previous : Use of HVAC Electronics Has Taken a New Leap- Explore the Scenario
Next : Sleek new Mobileye robotaxi unveiled with launch of MoovitAV robotaxi service