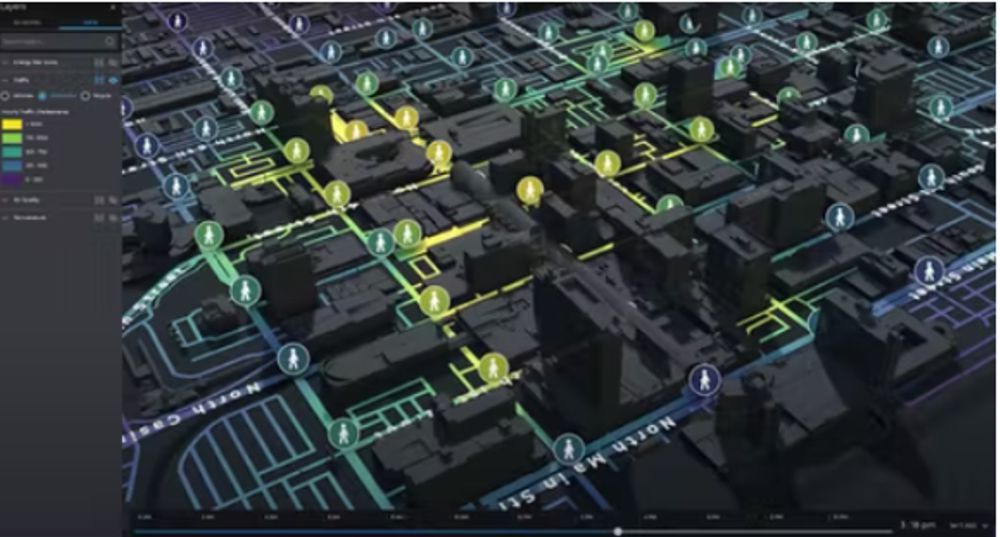 Re-vitalising office and retail space in cities with Digital Twins

Re-vitalising office and retail space in cities with Digital Twins

City real estate owners face a crisis as the ‘work from home’ culture causes serious under-use of prime urban offices, and e-commerce booms at the expense of city centre retail.

Together with entrenched city problems, like traffic congestion, poor air quality and the high cost and shortage of housing, vast areas of once sought-after urban space now faces a real challenge of re-invention.

Market watchers say it is now a huge concern for the landlords, managers, and city planners, when they are also under public and political pressure to slash carbon emissions from these assets.

The powerful financial markets watchdog, the US Securities and Exchange Commission (SEC), has put forward a proposal that would force public and private real estate owners to additionally disclose the climate risks and carbon emissions of their holdings and, where applicable, proposed lower emission targets and plans.

While the SEC market watchers predict real estate owners will increasingly face tenants and investors with environmental, social and governance (ESG) guidelines who are going to demand risk disclosures, and emission-reduction plans.

Digital Twins are widely forecasted to be the advanced technology that could rescue the owners, by virtually re-modelling and re-designing under-used real estate, plus delivering low-emission plans, before a single dollar is spent on any physical re-purposing.

Urban Digital Twin pioneer Michael Jansen has already shown it can work; he’s the CEO and Founder of award winning Digital Twin company Cityzenith, which launched its ‘Clean Cities – Clean Future’ initiative to adapt and re-balance cities urban spaces to meet new pressures – now exacerbated by the pandemic. ABI Research forecast $280 billion in savings for building asset owners and city planners before the end of the decade through the deployment of Digital Twin technology in our cities.

“This can be achieved virtually, with one building at a time, or blocks, districts, and even city-wide, plus associated infrastructure such as road networks.

“But those who should really tune in here are the landlords who need to maximise the value of their real estate, who know they must re-purpose these assets fast, while addressing environmental concerns,” added Jansen, who was an architect before opting for the wider horizons offered by Digital Twins.

“But it can also help re-position them, using the Digital Twin software’s powerful aggregated data, mapping, simulation, and design elements. Urban industrial zones and warehouses have been re-purposed previously as chic apartments and condominiums. Houston’s Montrose district is a fine example of regeneration creating a vibrant new and trendy design-led model.

“And London’s financial centre, the ‘Square Mile’, is looking at creating 1,500 homes by 2030, using some of the most valuable office locations in the UK.

“The trend will grow because 55% of the world’s population – 4.2 billion inhabitants – already live in cities, according to the World Bank. By 2045, the stat will reach six billion, pressing for housing across the range, from luxury high rise conversions to affordable homes, with good urban spaces available to all.

“Admittedly, some people have used ‘work from home’ as a chance to move to the countryside or coast, but some city dwellers love being close to culture – museums, theatres, restaurants – so we should see a renaissance of city centres, with more open spaces, river clean-ups and new community buildings.

“The exodus of office workers from city centres also poses issues for the huge suburban areas that ring a city centre. How will these also re-balance if their current populations must no longer commute ‘downtown’?

“Not all urban real estate will be able to make the transition either, but Digital Twins can model and show how we can re-purpose their sites most effectively, for sports and leisure perhaps, or solving urban transport issues.

“Cityzenith saw this urban renewal ahead of the market and has worked on it for many years, with exciting future options featuring buildings not only low or free from emissions, but also actively contributing revenue and savings through energy transition – solar glass windows and roofs, and vertical wind turbines – and vertical farming.

“And the space above cities may also become valuable; I was invited last year to present to NASA engineers and subsequently wrote a white paper on how Digital Twins might map out city airspaces to enable safe high-level transport using zero-emission air taxis and drones.”

Last year, Cityzenith was invited to join the World Economic Forum’s Net Zero Carbon Cities program and Michael Jansen has also just been appointed to the board of the Forum’s Urban Transformation Platform ‘think tank’.

Cityzenith has raised $14m since inception and will shortly close out a $20m RegA+ crowdfunding raise before moving to institutional money, enabling it to add a further 100 cities in the next 3-5 years to its Clean Cities – Clean Future Digital Twin initiative, and is targeting $150 million in revenue per annum within that time span.