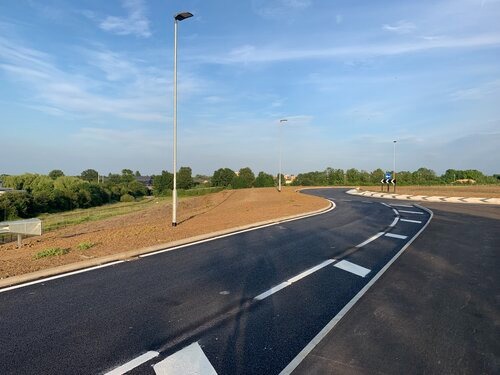 Reduced congestion and better access to major roads are among the benefits people living, working and travelling in and around Huntingdon will soon feel as a part of National Highways most recent upgrade on Britain’s biggest road project.

The latest landmark reached on National Highways (formerly Highways England) largely-completed £1.5 billion upgrade of the A14 in Cambridgeshire has seen a new link road connecting the A1307 at Views Common with Hinchingbrooke Park Road open today (Friday 3 September). 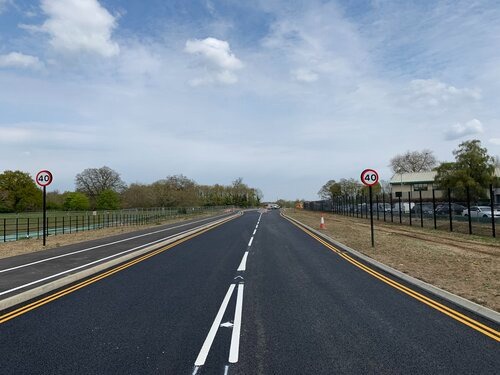 The stretch of road, which is just under a mile long, runs alongside the Police and Fire Headquarters, and will help reduce congestion in Huntingdon town centre and on the ring road by providing better access to major roads such as the A141, A1 and A14.

The opening is the latest step in National Highways work in the town centre which will also see Mill Common Link and the station car park to follow. Once the work to remove the 12,000-tonne railway viaduct is completed in 2022, the old A14 will also provide another route into the town from the west.

Laura Hampshire, Senior Project Manager on National Highways A14 Cambridge to Huntingdon improvement scheme, said:  “The A14 upgrade is delivering massive benefits for the UK, including reducing journey times by 20 minutes with 12 miles of new, three-lane dual carriageway, but it is also delivering benefits on a smaller scale, for local communities.

“The opening of this new road between Views Common and Hinchingbrooke Park Road, which links to the A1307 Spittals junction, shows that the project is committed to delivering upgrades to people living, working and travelling in and around Huntingdon. While we’re meeting the needs of A14 road users and freight, we’re also ensuring better connectivity to local towns and villages.” 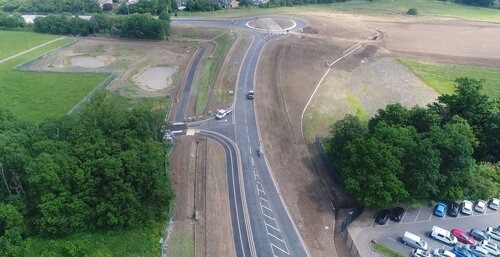 Some 2,500 tonnes of asphalt have been laid to provide the new link road, with 13 new street lights installed to illuminate the road. To protect the local environment approximately 200m of new hedgerows have been planted, 610m of newt fencing erected and two new great crested newt ponds created.

National Highways has finished the majority of work on its £1.5 billion upgrade of the A14 in Cambridgeshire, with 85,000 daily drivers benefitting with up to 20 minutes taken off their journeys following the opening of a new 12-mile bypass in December 2019, and the rest of the 21-mile stretch being upgraded to three lanes last May.

The improved 21-mile section is a vital link in the A14 which connects the East coast and the Midlands. The new road, which has been National Highways flagship project and the biggest investment in a roads project in a generation, is set to bring nearly £2.5 billion of benefits to the UK economy.

The A14 upgrade has employed over 14,000 people in total, with up to 2,500 working on site during the project’s peak. Building the new road took 14 million construction hours – the equivalent of almost 1,600 years.

Archaeological work on the new road unearthed woolly mammoth tusks and woolly rhino skulls, only the second gold coin of a Roman emperor to be found in the country, and the earliest evidence of beer brewing in Britain, dating back to 400 BC.

The project has also delivered many benefits locally including:

For the latest information about the A14 Cambridge to Huntingdon improvement scheme, including advance notification of road closures, visit www.highwaysengland.co.uk/A14C2H